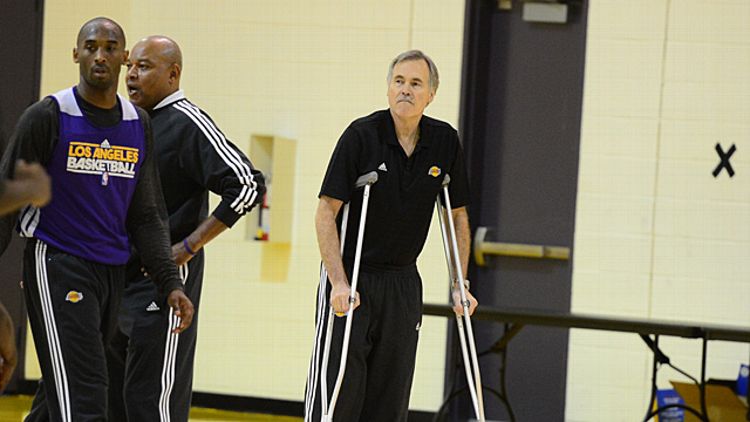 Mike D’Antoni’s best teams were in Phoenix during the mid ’00s. Those great Suns teams were led by Steve Nash and Amar’e Stoudemire, and their play was characterized by up-tempo pace, brilliant floor spacing, and great shooting. They were youthful, fast, and really fun to watch, leading the NBA in scoring for three consecutive seasons, peaking in 2006-07 when they scored 110.2 points per game.

Now D’Antoni finds himself under the purple-and-gold glare of Southern California. Yesterday at his introductory press conference, D’Antoni implied he was in favor of bringing that Phoenix pace to Los Angeles, and even went so far as to invoke the glorious Showtime-era Lakers team: “We would love to be able to play Showtime-type basketball.” Who wouldn’t love to be able to do that? That team was also youthful, fast, fun, and dominant.

The problem is D’Antoni inherits a Lakers squad that averages only 96.5 points per game and is rarely described as either youthful or fast. The maestro of pace is inheriting a graying orchestra that is currently 28th in the league in fast break points, 29th in bench points, and 30th in turnovers. These are the Slowtime Lakers.

The pinnacle of the Showtime era may have been the 1986-87 Lakers championship team, which went 65-17 and averaged 117.8 points per game. That team had an overall age structure much more like this year’s Miami Heat than that of the current Lakers. Do we expect a fragile 38-year-old Nash to emulate the 27-year-old Magic? Is the 34-year-old Kobe able to run the break like a 26-year-old James Worthy? Will Metta World Peace hit 44 percent of his 3-point shots like Byron Scott?

This group of Lakers is very talented, but in vastly different ways than Magic’s best team. Winning with this group will require a strategy that properly aligns schemes with the talents of Nash, Kobe, Pau, Dwight, and Metta; it is doubtful that extreme offensive pace aligns with this squad. The Lakers offense is in trouble, and D’Antoni may be able to fix it, but he’s got to know what he’s working with. What can these players do?

Aside from their age, perhaps the most defining characteristic of the 2012-13 Lakers is their size. Pau Gasol and Dwight Howard are both great centers, and both start. Although these guys are clearly dominant scorers, playing them together introduces a spatial challenge for D’Antoni: How can you maximize the offensive production of both Gasol and Howard without totally clogging the paint? If D’Antoni can effectively solve this riddle, the Lakers will be dominant. Close-range shots remain the most efficient scoring options in the NBA, and Gasol and Howard are both great close-range options. 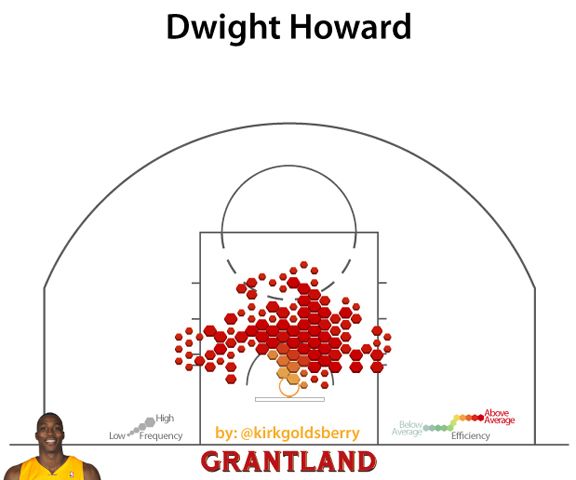 The Lakers also start two great mid-range shooters, Nash and Bryant. Nash is simply one of the most efficient mid-range guys in the league. He’s especially lethal in the pick-and-roll zones near the elbows. Kobe is not as efficient, but he can create decent mid-range scoring opportunities at will, something very few NBA players can do. In fact, no player in the NBA has taken more mid-range shots over the last few years than Kobe Bryant; he’s certainly not finicky about where he shoots. 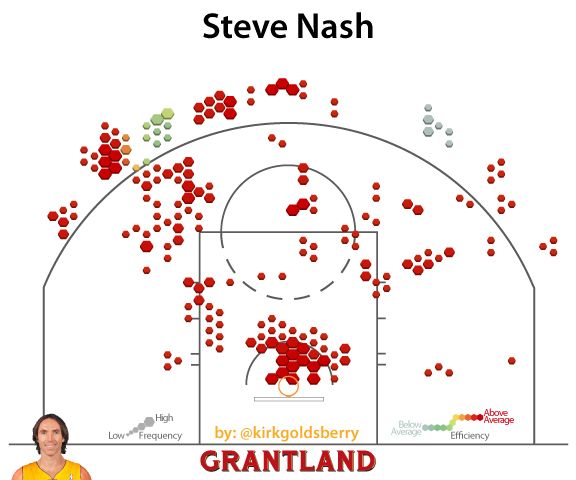 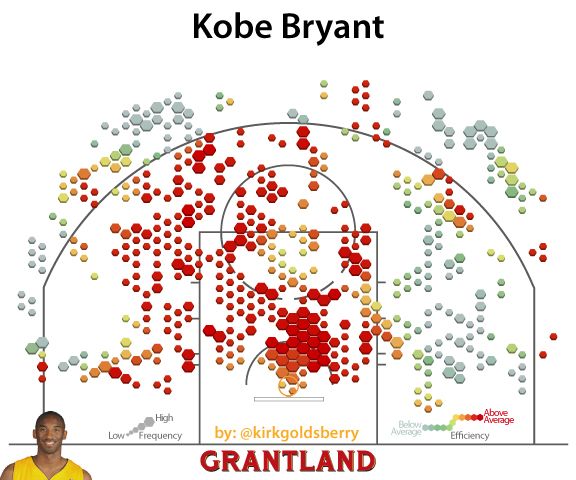 Beyond Nash and Kobe, who is off to a great start shootingwise, the Lakers lack long-distance distance shooting from their starters. In Phoenix, D’Antoni had a set of great shooters that enabled him to space the floor and threaten 3-point shots from various angles and personnel, which in turn opened up the floor for Nash and Stoudemire. That’s not the case in Los Angeles; three of the team’s five starters are bad 3-point shooters, and two of them present no spacing threat at all; will Kobe be this team’s spot-up 3-point shooter?

From a spacing perspective, the corners are perhaps the most vital places. Teams that threaten from the corners keep defenses honest in critical zones, which opens up driving corridors and hinders double-teams on post-up players. The Lakers’ starting unit lacks corner threats. This composite image of where the five Lakers’ starters tend to shoot reveals gaps in the corners. No starting Laker is a good corner 3 shooter. Kobe and Nash can hit corner 3s, but their talents are better suited for other court spaces, namely the wings and the mid-range. Metta World Peace likes to shoot the corner 3, but a quick glance at his chart reveals he is by no means Ray Allen. 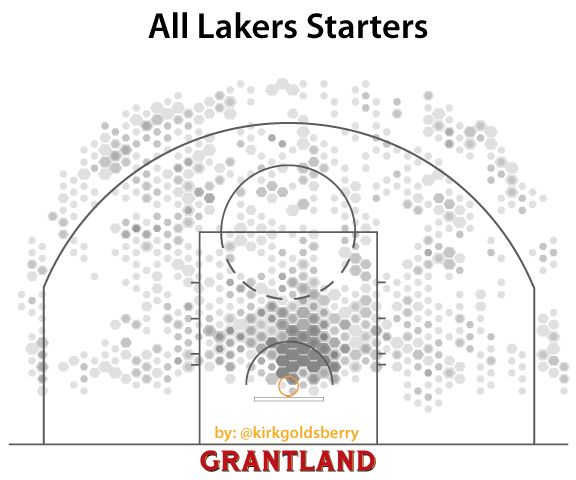 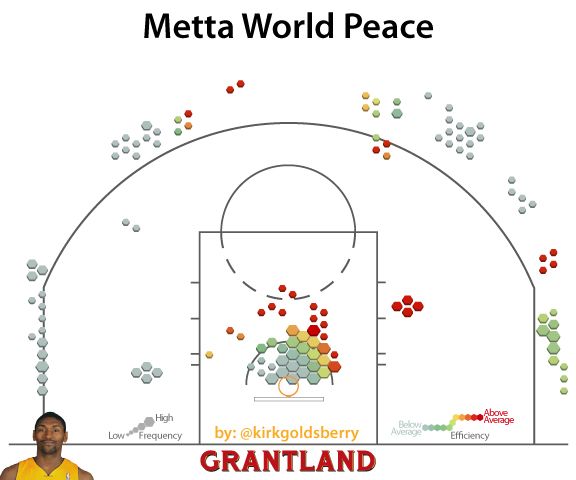 Who will be the Lakers’ corner man? Who will provide that key spatial anchor in the corner that opens up space for Nash, Kobe, Pau, and Dwight? Steve Blake is a world-class corner shooter, but when Nash returns, he’ll be on the bench most of the game. Jodie Meeks is great from the wings, but not very potent from the corners. Don’t get me started on Antawn Jamison. The corner represents a serious challenge for D’Antoni; Steve Novak ain’t walking through that door.

There’s no question that the Lakers possess championship talent, but there are many valid questions about what kind of system can translate that talent into victories. It’s possible that D’Antoni can accomplish this translation, but it certainly won’t be easy, and if it happens I doubt it will resemble the great Lakers style of the Showtime era. Regardless, this will be fascinating to watch.