CourtVision: The Heat, the Wizards, and a Tale of Two Cities 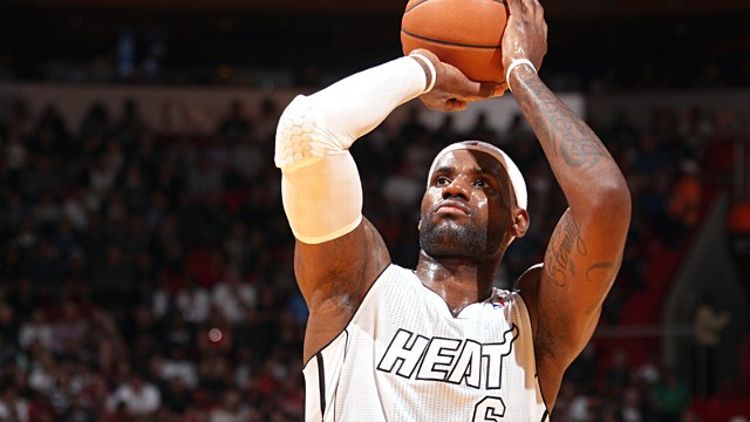 It’s never too early in an NBA season to judge a player or team’s performance — just ask Mike Brown. The season has just begun, but important trends are already emerging. Some are familiar; some are brand-new. In terms of scoring, as of Friday, NBA players had made 11,039 out of their 24,940 shots (44.2 percent), which is slightly down from last season’s 44.8 percent, which was slightly down from the 2010-11 season mark of 45.8 percent. Looking at scoring across the league on a team-by-team basis, some interesting things start to emerge. One of them is the disparity between two teams in the NBA’s Southeast division: Miami and Washington. It’s been a tale of two cities. In one, we see unmatched offensive firepower. In the other, it’s a tale of woe.

Miami: The Best of Times

It should be no surprise that the Miami Heat are good at scoring, but this year, they’ve been even more potent on the offensive end. The Heat led the NBA with a 49.4 field goal percentage, just edging out the Clippers, and they’ve done it by dominating at all three levels: close range, mid-range, and 3-point range. Close to the basket, LeBron James and Chris Bosh are arguably the most dominant scoring duo in the league. LeBron is hitting 70 percent of his shots within seven and a half feet of the rim, and Bosh is right behind him at 65 percent. But this is not news; what’s startling about Miami is that the team is quickly becoming one of the league’s best jump-shooting squads from both mid-range and beyond the arc.

The Heat are second in the league in mid-range efficiency, barely trailing the Celtics, who are the masters of mid-range shooting. Overall, the league hits about 38.6 percent of its mid-range attempts, but both the Celtics and the Heat are making these shots about 45 percent of the time. The Heat’s improved efficiency in the mid-range has less to do with LeBron James — who has been average in the mid-range this season — and more to do with Chris Bosh, who is hitting a Nowitzki-like 54 percent. Only eight players have attempted more mid-range shots than Bosh this season, and none have made more than half. With all due respect to Dwyane Wade, Bosh is beginning to look like the team’s second-best scorer, both close to the basket and in the mid-range.

The most noteworthy development in Miami this season, though, may be what’s happening beyond the arc. Last season, only one in five of the Heat’s field goal attempts occurred beyond the arc. This season it’s more than one in four, which is a huge increase. And not only are they shooting tons of 3’s, they are making them 43 percent of the time — second only to the Thunder in terms of efficiency.

Miami has made more 3’s than any team in the league, and although it’s tempting to call this the Ray Allen effect, that’s not the whole story. Ray is off to a great start — he’s made more than 50 percent of his 3s — but he is only part of the emergent Miami 3-point monster. Rashard Lewis, Ray Allen, and Shane Battier are a combined 69-138 from beyond the arc this season — which is both exactly 50 percent and very frightening for opponents. The trio is the main reason the Heat are the best corner-3 team in the league — a critical tactical advantage because it can keep defenses honest and spaced out while LeBron, Wade, and Bosh operate in their favorite spots. 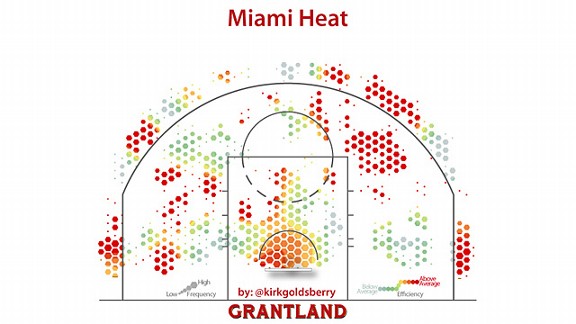 The Worst of Times: Washington

The Wizards are currently 0-11 and probably the worst team in the NBA. Their offense without Nene and John Wall has been awful, and they’re last in the league in field goal percentage at 39.6 percent. That type of deficiency is often more related to where a player or team is shooting than it is to how well that player or team is shooting, and that is the case so far with the Wizards. Washington rarely gets to the rim, and they rely on jump shots more than any other team in the league.

The most efficient shots on the floor are near the basket, and it’s why the restricted area is the most vigorously defended zone on the court. Overall, 42 percent of NBA field goal attempts occur within 7.5 feet of the basket. Washington is getting a league-low 32 percent of its shots in this efficient real estate, meaning 68 percent of their field goal attempts are either mid-range shots or 3-point shots. This would be less of a problem if the Wizards were very good jump shooters. But they’re not. Too many of the Wizards’ possessions end with a missed jumper by A.J. Price, Bradley Beal, Trevor Ariza, or Emeka Okafor.

The key problem has been the lack of any interior offense. When a team fails to threaten the defense close to the basket, everything else suffers as a result. Jump shots are contested, and 3s are rarely open. Perhaps the return of Nene and John Wall will result in better shots for the Wizards. If not, it will be a long season in Washington. 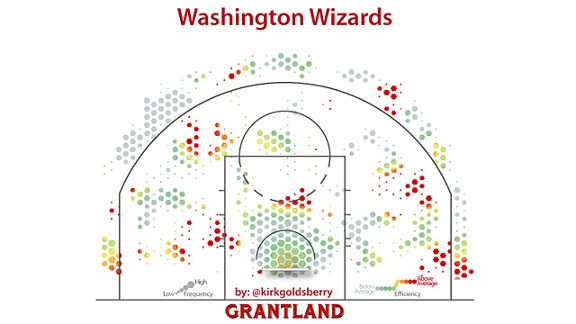 Joey Barton Speaking in English With a French Accent Is Mesmerizing