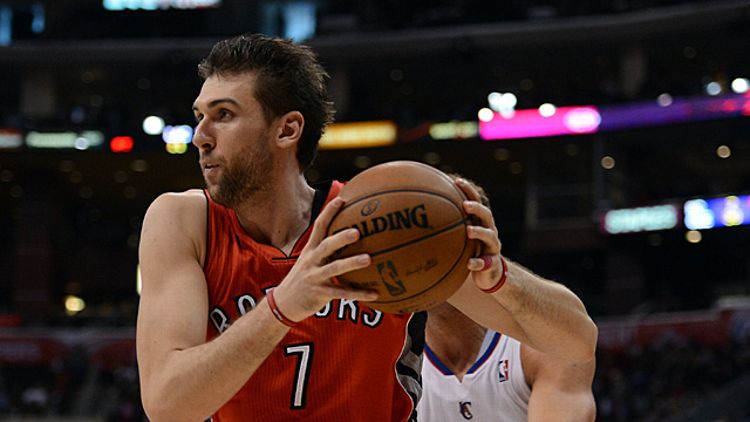 As news trickled out last night about the Knicks’ pending acquisition of Andrea Bargnani, I found myself wondering what they know about Bargnani that the rest of the league does not. He was rumored to be an amnesty candidate, so why would you trade any assets, especially draft picks, for his swollen contract?

There was a time when Bargnani appeared to be the next legitimate European “stretch 4.” He was so enticing as an athletic 7-foot prospect that the Raptors selected him first overall in the 2006 NBA draft. However, time has been cruel to him, his body has proven to be fragile, and his development on the court has been modest at best. In a nutshell, Bargnani has not panned out.

About the only thing that has improved is his defense, which has risen from atrocious to acceptable. Over the past few years, the other key aspects of his game have either regressed or remained stagnant. As a scoring 7-footer, you would expect Bargnani to rack up tons of double-doubles. In 2009-10 he had 10, but in the three seasons since then he’s only had four combined. The problem is simple: He can’t rebound.

Bargnani is among the worst rebounding big men in the NBA. He plays like he doesn’t know how tall he is. In general, it’s obnoxious to label European big men as soft, but in this case it might be fair. He doesn’t know how to use his frame to help his team, and as an offensive player he much prefers the perimeter to the interior. His shot chart is not very impressive.

For a player of his size, Bargnani is surprisingly ineffective near the hoop. Last season he made only 47.8 percent of his close-range shots. He is better when he stretches out defenses and drags opposing big men out of the paint. However, unlike other bigs who do this (Chris Bosh, Kevin Garnett, Tim Duncan), Bargnani is a mediocre jump shooter. With the exception of a good shot at the top of the arc, in Toronto, Bargnani failed to find a real sweet spot.

To be fair, Bargnani is still young enough to develop, and in a new environment with better teammates, it’s reasonable to expect improvement. Regardless, pinning hopes on him remains a leap-of-faith proposition at best. It’s very hard to find a 7-foot NBA player who shoots less than 40 percent from the field and averages fewer than four rebounds per game. It’s even harder to justify spending $10 million per season on one.