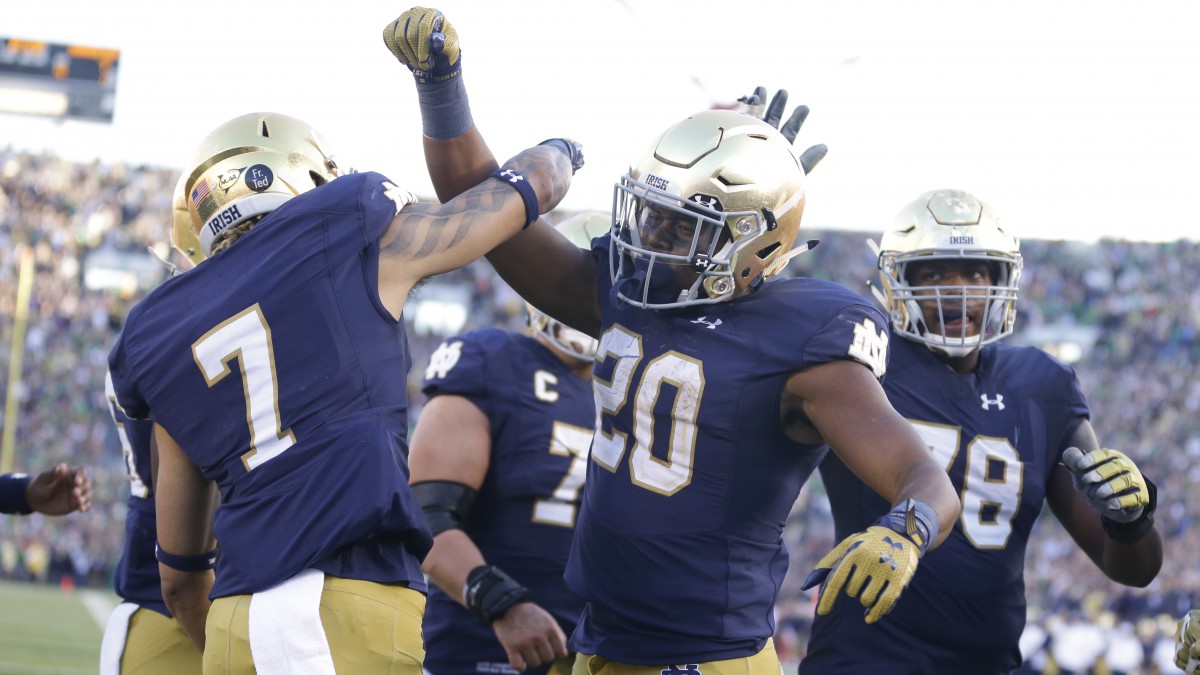 The great news is, if you’re reading this, you made it through the dregs of that dreadful September slate and into the best month of the college football season. The bad news is, your life doesn’t belong to you anymore. Are you hydrated? It’s too late to find out any way but the hard way.

But what’s that sound? Is it things getting real? Is it your team’s veiled flaws creeping up behind you? In the form of a dead-eyed shambling figure in a hospital gown? Surely not. Surely it’s the wind. (All times Eastern.)

Top 25 Matchups: FIVE, only three of which overlap almost entirely, so … progress? Of a sort? No. 23 West Virginia at no. 15 Oklahoma gooses the schedule early with an abominable pre-noon local-time kickoff in Norman (noon, FS1) and the Mountaineers secondary’s first real road test against a high-powered passing attack. In the midafternoon slate, we have no. 13 Alabama at no. 8 Georgia (3:30 p.m., CBS), pitting Dawgs DC Jeremy Pruitt against his former Sith master Nick Saban. In prime time, grab a second screen or a third remote and prepare to have your attentions divided between no. 3 Ole Miss at no. 25 Florida (7 p.m., ESPN, just let the defensive lines fight it out with padded swords and save everybody else the hassle), no. 21 Mississippi State at no. 14 Texas A&M (7:30 p.m., SECN, why after playing both Auburn and LSU does this still feel like our first good look at MSU?), and no. 6 Notre Dame at no. 12 Clemson (8 p.m., ABC, feels like a cratering loss on somebody’s part but no idea whose).

How High Are the Week 5 Stakes? High as the special-effects budget for an unnecessary tightrope movie that was already a perfectly serviceable documentary? Which is to say, somebody’s definitely getting a whole bunch of security guards fired at all five of the above contests.

Destination Game of the Week: Athens. The last time Georgia and Alabama met during the regular season, the game produced the most succinctly elegant piece of sportswriting ever constructed; take it away, Dan Wetzel’s description of what Saban’s like after a 41-30 Tide win:

There even were conflicting reports that he smiled in the victorious locker room.

“Yes, he smiled and told us he loved us,” Reamer said.

This year’s iteration promises to be great people-watching; not only does it pit two of the best tailgating fan bases in the country, but they’re also both crowds that take losses very, very personally.

Undercards of Import: Large chunks of the Big Ten that you might not have gotten to see this season will be featured in a series of conference matchups, beginning with a Minnesota squad that lost to TCU by six in Week 1 at undefeated no. 16 Northwestern (noon, BTN), and 4-0 Iowa at no. 19 Wisconsin, which lost its season opener to Alabama (noon, ESPN). The agenda item of greatest interest here lurks in the afternoon slate, when no. 1 Ohio State visits a 4-0 Indiana team whose best win is over Western Kentucky (3:30 p.m., ABC/ESPN2).

Profiles in Profiteroles: Houston and Tulsa are two of four teams that look prepared to challenge Memphis and Navy for first place in the AAC West, but first they’ve got to play each other (noon, CBSSN). Your #MACtion of the week is in Muncie, where a Toledo team with wins over Arkansas and Iowa State visits a Ball State team that just lost at Northwestern by five (3 p.m., ESPN3).

Rivalry Games of the Week: Hard to imagine any team but the Mids snagging the Commander-in-Chief’s Trophy come December, but they make ’em play anyway, starting with Air Force at Navy (3:30 p.m., CBSSN). There’s also a brand-new trophy game in the offing later that evening, in the form of South Alabama at Troy and a BIG DAMN BELT (7 p.m., ESPN3). But we all know what time it is. Brothers and sisters, it’s Fremont Cannon time.

UNLV at Nevada kicks off at 7 p.m. on the Mountain West Network.

Grudge Match of the Week: San Jose State at Auburn (4 p.m., SECN). It’s not so much that this game itself is a rivalry between the schools — the Tigers beat the Spartans 59-13 last season in the teams’ first meeting — as it is SJSU tailback Tyler Ervin appearing to harbor a particular and personal antipathy for opposing ground defenses. He recorded a perfect 300 rushing yards versus Fresno State last weekend and will take the field on the Plains facing a team allowing opponents 5.31 yards per carry.

This Week in Why? We’re still, as a society, apparently letting Missouri play football after what happened against Connecticut. Same goes for South Carolina after what happened in every single one of its games this season, which goes to show that if anything, we don’t have ENOUGH governmental red tape in this great nation. (Gamecocks at Tigers, noon, SECN.)

This Week in Why Not? Arkansas at Tennessee (7 p.m., ESPN2), because haven’t you always wanted to put a homemade science project volcano in the crockpot?

Thursday: Miami at Cincinnati (7:30 p.m., ESPN). I was fully prepared to call for a boycott of this game in protest of the Canes doing away with their cuneiform unis, but what, like you’re gonna watch Ravens-Steelers?

Friday: Three games, none of which looks particularly competitive on paper, beginning with Temple at Charlotte (7 p.m., CBSSN) and Memphis at South Florida (7 p.m., ESPN2), then ending with UConn at BYU (10:15 p.m., ESPN2).

Saturday: Call this a chalk weekend, with maybe just a little too much going on to do more than cursorily glance at your auxiliary rooting interests. The course you set for yourselves will be a simple one; it’s the volume that offers the challenge.

No. 23 West Virginia at no. 15 Oklahoma (noon, FS1) is first up, and everybody else in the first flight who’s ranked has an unranked opponent, but of the choices, Texas at no. 4 TCU looks the most like it might offer some events of interest (noon, ABC).