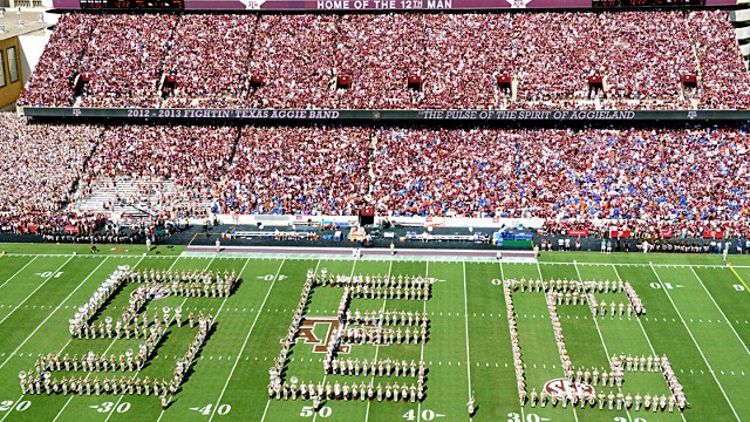 Last week, the Texas A&M Aggies discovered they’d won championships that no one knew about. That this revelation occurred right before the Aggies’ first game as members of the SEC, and right before the College GameDay crew arrived in town, is one of those … well, it’s not a coincidence.

For most of history, A&M has claimed a single national title, in 1939, when German Panzers were rolling into Poland. This year, A&M decided it had won two more national titles, in 1919 and 1927, and added them to a display at Kyle Field. Let’s look at the 1927 title. That year, judging by A&M enrollment data, the university had around 2,500 students. All of them were men. Dana X. Bible’s Aggies played a nine-game schedule, which included an impressive five shutouts. One of those shutouts was a 0-0 tie against TCU. When the season ended, various outlets — there was no AP poll yet — gave the national title to Illinois and Notre Dame.

Nearly 60 years later, as Barry Petchesky notes, Jeff Sagarin created a computer formula to rank college football teams. He retroactively declared A&M the 1927 national champs over Illinois et al. So in 1927, Texas A&M won a national title, even though that title wouldn’t exist for almost 60 years and the Aggies wouldn’t brag much about it for 85 years.

It gets stranger. This year, the Aggies also claimed new conference titles, for 1997 and 2010. I was in college in 1997, at Texas, so I can testify about that one. A&M lost the December 6 Big 12 title game to Nebraska, 54-15. Readers of the next day’s Dallas Morning News would discover a headline that read, “Ineffective offense stages A&M’s loss.” The Nebraska-A&M game was so uninteresting that it doesn’t even rate a Wikipedia page — though that might be the result of UT fans and our co-conspirators in the media.

An A&M spokesman later said the school would add a “South” next to the ’97 and ’10 titles on the display. By this point, the Internet had noticed.

Making the past more glorious than it was is one way college football changes history. Another way is to make the past disappear completely. Thanks to Reggie Bush’s NCAA violations, USC did not win 12 games in 2005. I was at the Rose Bowl that year, so I must have been on a Dickian amphetamine binge when Bush lateraled the football to nobody. Also retroactively, Bush did not win the 2005 Heisman. And USC’s athletic department has — forgive the Bidenism — literally painted Bush out of the program’s history.

It’s easy to mock this stuff. But the Aggies are working within a rich tradition. In college football, history-tweaking is a feature rather than a bug.

Why? It starts with the uncertainty about college football’s true national champion. Before the AP poll, different outfits crowned different champions as a way to move newspapers; later, the BCS verdict was challenged nearly every year. If you read Wikipedia’s national title page, you learn that, in 2007, the computer ranking system Anderson & Hester awarded a 12-2 Missouri team the national title. Missouri came about as close to winning its conference title that year as A&M did a decade earlier.

The lack of an official line opens the door for Birther-style claims. Alabama says it won 14 national titles. One of these, USA Today notes, came in a year when Bama finished no. 20 in the AP poll. A&M, Bama’s new conference mate, was merely trying to keep up.

Mostly, history-tweaking buffs a school’s image, like adding 5,000 seats to the stadium or bitchin’ leather sofas to the players’ lounge. I love it when message board people, who show little interest in anything that occurred pre–Desmond Howard, peel through Jazz Age microfilm in search of a lost championship. The correct literary reference here probably isn’t Philip Dick. It’s Robert Langdon. The ecstatic truth is out there, moldering in an old Athlon guide, and if we just could find it … by god, history would never be the same!

Filed Under: College Football, Texas A&M, The U