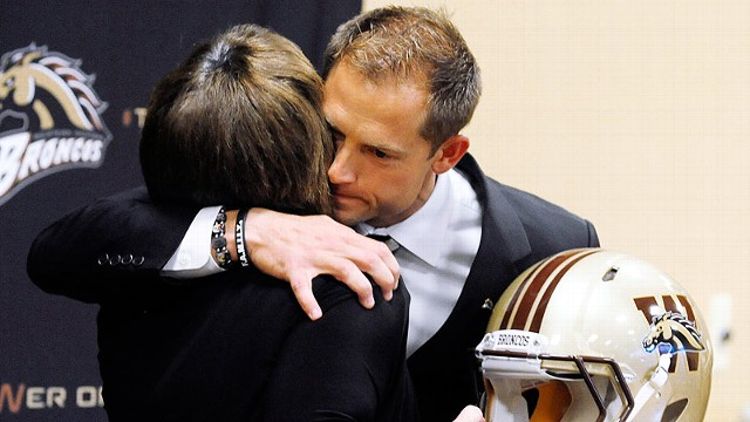 A tertiary allegiance to a MAC team is a crucial component of the well-rounded college football fan’s existence. (Actual MAC alumni: Go pick yourselves out a nice Pac-12 squad to get behind this season. Might we suggest Arizona?) When weeknight mid-major football becomes a regular fixture late in the year, smart consumers will want to begin storing games away in preparation for the long bleakness of the offseason, like squrirels with overstuffed DVRs. And as long as you’re not super picky about weeknight time with your family or watching your chosen team operate in its own stadium, you can even see these games on television. The cruel odds of a short season also make it highly likely your primary rooting interest will be nearing an unsatisfactory end come November, and nothing cures late-autumn football malaise like an untidy Tuesday-night pointsplosion. (NB: Speaking of cruelty, understand when making your MAC selections that Buffalo football cannot be viewed on television because of a longstanding and inexplicable V-chip glitch.)

When choosing a MAC team, there are strong cases to be made for all three directional Michigan FBS football programs. Central Michigan famously produced Eric Fisher, the first overall pick in this spring’s NFL draft. Eastern Michigan’s head coach boasts this solemnly menacing Twitter profile. But we have suggested before and find ourselves again returning to Kalamazoo and the Western Michigan Broncos.

In operation since 1906, the Broncos have participated in five bowls and won two conference championships. Chief exports include Jason Babin, Terry Crews, Greg Jennings, and Tony Scheffler. This is not, objectively speaking, the best directional Michigan team — the Chippewas, Broncos, and Eagles piled up at the bottom of the MAC West standings last season, with WMU right in the middle — but with a head coaching change (we will get back to this), this is an opportunity to get in on the ground floor. Of a rowboat. (We will also circle back to the rowboat. Hang on.)

Western Michigan adherents will get to see the Broncos play on television with some frequency, even before weeknight MACtion sets in. They open the season in East Lansing on the first Friday, facing Michigan State on BTN, and travel to Northwestern two weeks later for a late kickoff in Evanston, also on the enemy conference network. Week 4 is the Saturday of intrigue: the fourth and final nonconference contest is in Iowa City, against a ragtag band of Hawkeyes. This is a winnable game. Directional Michigans have done it before! That same weekend! By Thanksgiving week, as previously mentioned, all true believers will have turned to football hoarding in anticipation of football-free months to come. The Broncos will face Northern Illinois, this year’s toast of the mid-majors and new head coach P.J. Fleck’s alma mater, on ESPN2 on a Tuesday night.

Meet Coach Fleck. He graduated from college in 2004 and is the head coach of an FBS football team. He boasts one of the most resplendent heads of hair in the game. He can also make you believe in Western Michigan football. P.J. Fleck may be a sorcerer.

The early months of the hatchling Fleck era have been hallmarked by an almost reckless dispensation of metaphors. We’ve got horses rowing wooden boats. We’ve got acronyms that could double as code names for sinister outfits on missions to bring down James Bond. But essentially, this new age of Broncoball can be summed up by “Nekton Mentality, Prefontaine Pace, and a Farmers’ Alliance.” Got all that? No? Coach Fleck shall explain:

WARNING: We’re not sure we could ever look P.J. Fleck in the face and not end up playing Western Michigan football. Use caution when viewing this video.

:56 P.J. Fleck gives you all these metaphors AT ONCE, and trusts you to keep up with him. Won’t you meet him halfway?

1:52 Now we are imagining a horse jumping out of the water and killing a seal, only to do that the horse would have to get out of the boat?

2:03 Fleck posits that a great white shark could eat 5 million seals. We want him to host Shark Week.

2:30 “[Steve] Prefontaine was a great distance runner back in the ’70s. It was way before I was born.” Us too, coach. Is P.J. Fleck the most blogger coach?

5:00 We are now discussing cross-pollination of corn crops and how it relates to college football. This is his version of energy vampires, only it is about corn.

So these horses in rowboats, you see, will be fine, because shark mentality. If these horses in rowboats stop moving, they will die. Please understand we are not being the least bit flip when we say we are ready not just to be a fan, but to PLAY Western Michigan football. All we need is a season of NCAA eligibility and the remotest shred of athleticism. This is a first-time head coach in his first year of skippering a team that has no reason to be good right away, but if we were only in it for the wins, we’d all be Alabama fans, and then who would we fight in parking lot after the Iron Bowl?

Row the boat, everybody. With your hooves. Go Broncos.