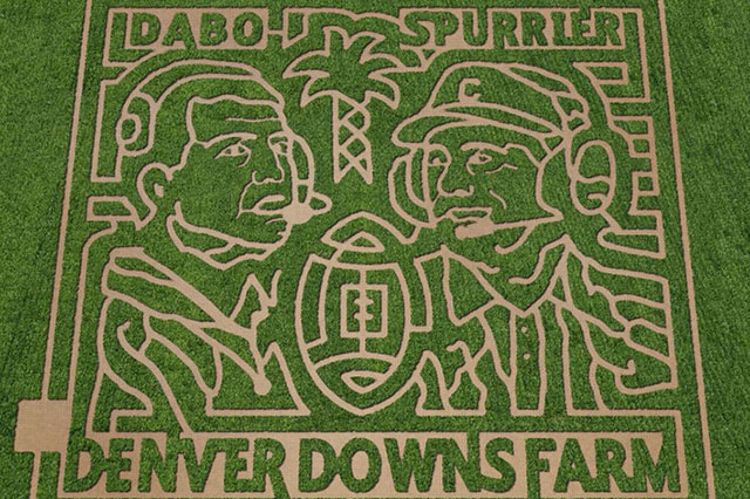 The Denver Downs corn maze in Anderson, South Carolina, has taken upon itself the task of encapsulating the Clemson–South Carolina football rivalry in cornfield form. It is not the first college football corn maze, but it is one of the more elaborate designs you’ll see this fall, and its attention to detail is admirable. The maze’s creators have tactfully given Steve Spurrier and Dabo Swinney’s faces equal amounts of lining, requiring the presence of a visor to tell one apart from the other.

Does your treasured rivalry game come with its own corn maze, gentle reader? Probably not, right? That’s a shame. We are here to help you:

The Battle of I-10, recommencing this weekend, features the second-greatest set of traveling trophies in all of sportsdom that we will never, ever shut up about, because one is a replica of a silver spade found in an abandoned mine in the 1940s and the other one is a spittoon:

The mighty platypus makes a fine middle-ground trophy for a pool of competitors consisting of both Ducks and Beavers.

Three coaches’ faces would be hard to fit in one cornfield, and there is legitimate concern that Matt Wells is not yet well-known enough to have an outline of his face drawn with a tractor be recognizable. Smart corn-maze proprietors will go with the Beehive Boot, which we have never proven is not filled with live bees.

The Battle for the Bones is the most important rivalry in athletic history, despite involving watching Memphis and UAB play football, because the trophy is a bronzed rack of ribs.