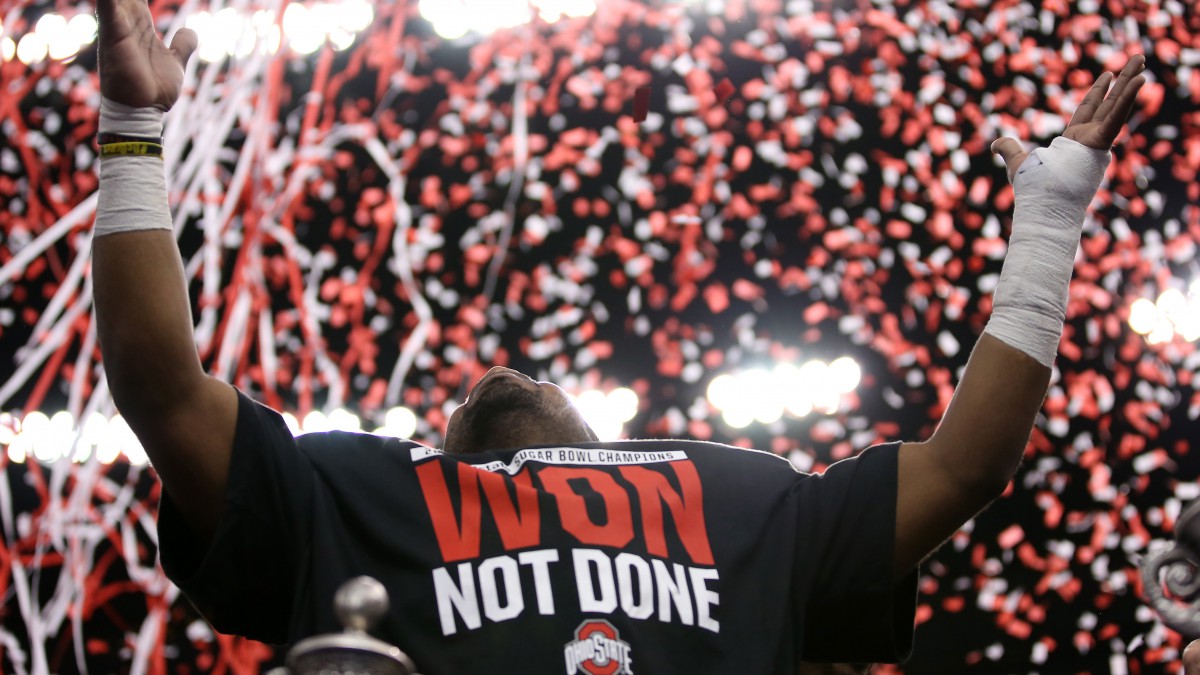 We should pause now, before the trumpets really start to sound, and the luxury suites begin to ring with barely disguised corporate corruption and plutocratic deceit, and before the entire shiny new circus of the College Football Playoff (presented by Gigantocorp, a Monstro company) descends on Jerry Jones’s monument to Freudian overcompensation in the vast real estate desert outside of Dallas. We should pause and listen for the small, human things, because you can find them even in the master class in hysteria like the one thrown across the Superdome by Alabama and Ohio State — which ended far later than it should have, and which took the Buckeyes longer to put away, at 42-35, than the rest of us had any right to expect. It’s easy to overlook the really good stuff that lies buried under the hype and the confetti.

Take, for example, the fact that the unquestioned MVP for Alabama was its punter, JK Scott, a high-pocketed 6-4 freshman out of Denver, who kept Ohio State pinned inside its own 10-yard line all night long. Scott punted seven times for a 55-yard average, including one towering 73-yarder from his own 17-yard line. Five of his seven kicks landed inside the OSU 20-yard line, and none of them found the end zone. Scott was an authentic weapon the way a punter has not been a weapon in a Sugar Bowl since the days when invites went sailing off from New Orleans to exotic locales like Carnegie Tech, Fordham, and Santa Clara. JK Scott is a little bit of the oldest school of football there is, unstuck in time. He’s more than worth watching.

There was also Cardale Jones, fearlessly attacking Alabama’s championship-quality defense in just his second career start. With eight minutes left in the first half, Alabama had pushed its lead to 21-6 and appeared to be rolling downhill and picking up speed. There was no indication at that point that Ohio State would be any competition at all. Jones’s brain was on scan. Suddenly, though, it found a station and locked in.

He completed five of his next seven passes, including two clutch third-down throws to Jalin Marshall, and Ohio State found itself on the Alabama 3-yard line. Ezekiel Elliott — the game’s unquestioned MVP with 230 rushing yards on 20 carries — scored to cut the lead to 21-13. Then, with a little more than a minute until halftime, and after a 59-yard punt from Scott, Jones brought the Buckeyes deep into Alabama territory almost single-handedly. He hit on three passes in a row, and then ran for 27 yards. That left Ohio State on the Alabama 13-yard line with 19 seconds left in the half.

And then there’s Evan Spencer, a wide receiver for Ohio State, and Evan Spencer had a night for himself.

“I haven’t thrown a touchdown pass since high school,” Spencer said. “I think I might have thrown a pick or two, too, but this one worked out.”

Jones flipped the ball to Spencer and Spencer pulled up and lofted a pass toward the left pylon, where Michael Thomas went up and grabbed it, coming down with just a sliver of green between his foot and the white of the sideline. “I just needed the ref to throw his hands up, and then I started celebrating,” Spencer said. That sent Ohio State into halftime trailing only 21-20.

Spencer’s second big moment came on the game’s most crucial play. Jones had continued to be superb, pushing Ohio State to a 34-21 lead. However, by the middle of the fourth quarter, the Alabama defense had reasserted itself, and Ohio State was leading by only a touchdown, 34-28, when it got the ball back on its own 5-yard line. Shortly thereafter, on a first-down play from his own 15-yard line, Spencer heard Jones call a check at the line of scrimmage. It gets to be something of a blur after that.

“We had it called, and Cardale made a check,” Spencer said. “I was kinda like trying to look at the defense, and then the ball was snapped, and I started stressing, and I thought, Oh, man, I gotta get in there!”

You can see it on the replay if you watch very carefully. (Todd Blackledge may still be talking about it.) Starting from somewhere on the far shores of Lake Pontchartrain, Spencer came roaring down the line of scrimmage and positively buried an Alabama linebacker. Behind him, Elliott suddenly discovered that an airport runway had opened up in front of him, and he cruised 85 yards for the touchdown that sent Ohio State off to play Oregon — with the spectral figure of Phil Knight haunting the sidelines — for the first genuine national championship playoff game. 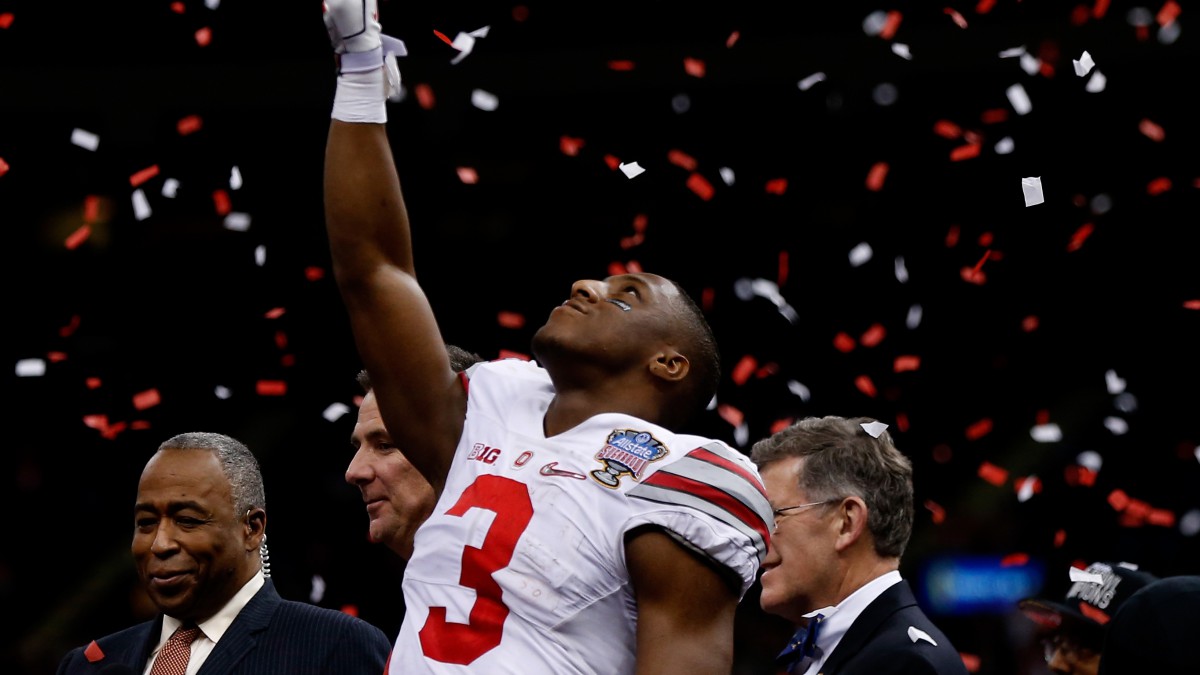 “We play pissed off,” said Spencer. “From the first whistle until there are three zeroes on that clock.”

The College Football Playoff already is the event that its corporate partners dreamed of, especially in the minds of the players who are taking part. All week, there was talk about how everyone was thrilled to be part of something new and important. A few days before the game, Ohio State cornerback Doran Grant talked about matching up against Alabama’s star wideout Amari Cooper, but he talked about it in the context of the new order of things. Even the usual clichés rang with a deeper resonance.

There never was a chance that the four teams picked for the first one of these were going to come from anywhere except from among the sport’s most prominent brands. Ohio State would have had to have lost to Michigan and then fallen into a lake before it would have been excluded. Truth be told, and all things being equal, which they never are, TCU and Baylor lost their chance in a boardroom somewhere long before anything happened on the field. The format may be new, but the calculations of the people who organize college sports haven’t changed at all.

But there is no question that the idea of a playoff has triumphed among the players themselves. They already sound like basketball players who are between the first and second rounds of the NCAA tournament. (And if you think the field is going to stay at four teams, I have a used Mercedes-Benz Superdome I’d like to sell you.) The old days of one, two, heck many national champions and an offseason full of entertaining, if unhinged, acrimony are long gone already. The players and the coaches already talk differently, as if there is something more substantial on the line than the top spot in the last AP poll. A kind of polished history, all shined up and sporting a brand-new logo, has been draped on the end of the college football season forever now.

“Obviously, we’re really thankful for the playoff system,” Elliott said. “They gave us a chance to go out there and show that we’re one of the better teams in the nation and we deserve to be in the national championship.”

“I think it’s good for college football. Once again, we’re part of history. And we also don’t want to swing and miss,” said Ohio State coach Urban Meyer. “My concern, and I think I’m probably going to address it again, is … are we going to get [the players’] families to Dallas? We should. That should happen immediately. There should be an immediate committee meeting somewhere say these families, ‘Let’s get them to Dallas and watch their sons play in college football history.’ And I hope you all write that. That’s more important than anything else being said today.”

That, of course, is a nod toward the great issue of compensating the people who do the real work, the indefensible system that is threatened still in several venues. What we have here is yet another example of the kind of revenue you can generate with largely unpaid labor and, within two years, the revenues will be nothing short of staggering. You can hear it in their voices, in the way the players have adjusted in their own minds to playing for greater stakes. Which is why the human moments still matter, while we can still see them. Watch a wide receiver throw a touchdown pass, and then throw a crucial block. Watch a punter put on an amazing show within the show. Listen for everything that is drowned out by the trumpets. Look carefully for what’s obscured by the circus parade.