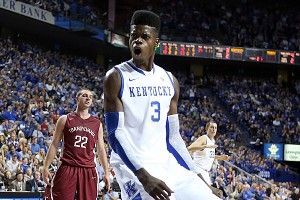 Predicting which freshmen will succeed in a given college basketball season is an inexact science. The rookies have only ever played in high school — except for the home-schooled players, and you can’t really trust their stats — and for every Anthony Davis, there’s a Shavlik Randolph waiting around the corner, chewing on a piece of straw and grinning in a super infuriating way. But in this age of increased visibility, with beady-eyed, camera-toting men traversing the country to produce frighteningly detailed reports on every prospect from Maine to New Mexico, it’s possible to make an educated guess about which youngsters will thrive. With that in mind, it’s time to unveil the 2012-13 Grantland All-Freshman Teams.

(Note: I did not include any players with lingering eligibility questions; hence the absence of UCLA’s Shabazz Muhammad. I also left out players who were redshirts last year, which eliminated Kansas’s Ben McLemore, among others. Recruiting rankings come from ESPN’s Top 100.)

This is Grantland, and studies have shown that our readership is 62 percent cooler than the nearest sports-related competitor. Our hippest readers understand that mainstream players are corporate sellouts. For that subversive group of counterculture geniuses, here’s the All-Hipster starting five. You’ve probably never heard of them.

The Dish: OK, to be honest with you guys, I’ve lost touch with indie basketball, and for the All-Hipster squad, I basically just went to ESPN’s list of top 100 recruits and filled in my five spots with non-BCS signees. A cynical approach? Maybe. But then I started learning about these guys, and damned if I didn’t reconnect with my roots. Fred Van Vleet is the one All-Hipster choice whose name actually sounds like it’s a indie band. And at 5-foot-11, he’s definitely a smaller-venue kind of guy.

The Dish: Indie folk artist, right down to the name “Kellen.” Can apparently shoot.

The Dish: He’s got that fashionable indie thing going where one of his names is super-exotic looking, like Sufjan Stevens or Regina Spektor. I turned to Twitter for other examples of normal-sounding names with a weird spelling in indie-type music, and got Thom Yorke, Mikel Jollett, Ani DiFranco (two weird spellings!), Stephin Merritt, Conor Oberst, Mat Kearney, and Aimee Mann.

The Dish: Shaquille O’Neal’s rookie season with the Magic came in 1992 (20 years ago), and his first appearance in the NBA Finals came in 1995 (17 years ago). Now there are a bunch of teenage prospects named Shaquille entering college. I only bring this up because it makes me feel incredibly old. Seriously, fuck. Also, Shaq Goodwin gets serious indie cred because people say things like this about him: “I don’t think he’s touched what he can do. Sometimes he’s just out there going through the motions.” How many times have you heard people say, “Oh he’s a total genius, but he just doesn’t try” about some dude in Brooklyn who paints old radiators and collects unemployment?

The Dish: This is a super indie pick by me, because Upshaw is actually hurt and could miss up to four weeks. If he never gets to play, he’ll be like Jeff Mangum post–In the Aeroplane Over the Sea — so much potential, but just sort of sitting around.

The Dish: It’s a pretty cool situation for Yogi, who seems to have earned the starting point guard spot on the preseason no. 1 team in the country. He’s incredibly fast with the basketball, which plays right into Indiana coach Tom Crean’s plans, and the fact that he has a pass-first reputation plays well on a roster full of guys who can score. Even if he averages fewer than 30 minutes per game, which is probable with guys like Will Sheehey ready to step in from the bench, it wouldn’t be a huge surprise if Ferrell led the Big 10 in assists — the sheer amount of Hoosier scoring could propel him even above Preseason All-American Trey Burke.

The Dish: There’s a certain amount of trepidation going around the Duke basketball world about Seth Curry, and it’s starting to become more and more probable that Sulaimon will be the team’s starting shooting guard. He scored 20 points in the Blue Devils’ first exhibition, but where he becomes extremely valuable is his defense. Duke struggled mightily to contain perimeter threats last season, and softer players like Curry were part of the problem. Now, with Curry experiencing lower-leg issues that Coach K says might “linger,” and coming off a 1-for-9 shooting performance in his first action of the season, Sulaimon has to be ready to take over. All indications are that the freshman is skilled and mature enough to do the job.

The Dish: If these rankings were all about talent, Bennett would be first team all the way. He’s the first McDonald’s All-American to end up at UNLV straight out of high school in 29 years, and he’s athletic and skilled and everything else you could want. The only reason I have him second team is that he’s likely to come off the bench on a Runnin’ Rebels squad full of excellent upperclassmen, and might not light up the scoreboard like he would on a lesser team.

The Dish: Another Calipari freshman, another strong, fast athlete who can score and defend. He’s the first Kentucky Wildcat on the list, and as you might have guessed, he won’t be the last. With Poythress, Kyle Wiltjer, and Nerlens Noel patrolling the middle, the ‘Cats might actually improve on last season’s rebounding numbers.

The Dish: The video above is a fascinating one, featuring a one-on-one duel between Adams and Nerlens Noel from last January. Adams finished with 23 points, 10 boards, and three blocks, while Noel had 12 points, four rebounds, five blocks. Noel’s team won 90-86, but Adams said he was feeling rusty since it was his first game in America. Makes you think, doesn’t it? Anyway, Adams is a New Zealander, one of 18 siblings, and a five-star recruit. It’ll be fascinating to see how he develops, but I expect him to immediately be good enough to make Pittsburgh a scary team in the Big East again.

The Dish: I had to watch 15 highlight videos for this post, but Marcus Smart’s was by far the most fun. He reminds me a little of Ty Lawson in the sense that he’s got a solid frame, moves down the court like a locomotive, and uses his strength as much as he uses his quickness. He’ll be a great rebounder (he averaged 9.2 boards as a two-time Gatorade state player of the year in Texas), and according to multiple sources, he’s got a special intensity. After Smart led the U.S. team in assists and steals in the U18 FIBA championships, Billy Donovan told ESPN that he hasn’t seen a competitor like him in a “long, long time,” and Mark Few said he emerged as the team leader immediately. From the highlights I’ve seen and the stories I’ve read, Smart gets my Most Exciting Freshman Award, which I just made up.

The Dish: Kentucky fans are very high on Goodwin after a 22-point performance in the team’s first exhibition, and he’s the odds-on favorite to become the team’s leading scorer. He’s not quite Michael Kidd-Gilchrist caliber, but Arkansas’s reigning Mr. Basketball can slash and hit a pull-up, and he’s athletic and strong and quick enough to become one of the top perimeter defenders in the conference. Top-three contender for Freshman of the Year, easily.

The Dish: Anderson is my preseason Freshman of the Year. He can play anywhere from point guard to power forward, and should blossom with or without Shabazz Muhammad on his side. The only concern here is quickness; could he be a Harrison Barnes type of player, who comes in with a lot of hype but suffers because of an inability to beat a defender off the dribble? It’s possible, but he also seems to have a lot more gears than Barnes, and a better ability to adapt to a game situation. He’s an active threat, and unlikely to sit passively beyond the arc while the game goes on around him. He was excellent in the team’s summer tour of China, and when the NCAA cleared him to play, UCLA’s hopes of challenging Arizona for Pac-12 supremacy got a whole lot brighter.

I knew one of Arizona’s three frontcourt freshmen — Ashley, Grant Jerrett, or center Kaleb Tarczewski — would make the first team. It turned out there were too many good centers for Tarczewski, and in the end, I went with Ashley just because he has slightly more of an inside offensive game than Jerrett, might be a bit better on the boards, and outperformed him in the exhibition game. But make no mistake, it’s a razor-thin margin, and this is mostly gut instinct. And in fact, Jerrett got the starting nod in the exhibition, so I could be wrong. In any case, these are three very talented young Wildcats, and Sean Miller has an embarrassment of riches. Tall, tall riches.

There seems to be a wave of paranoia spreading through Big Blue Nation that Noel will somehow crumble under the pressure of becoming the next Anthony Davis. This seems entirely unrealistic to me; if anything, there’s such a reaction against that mind-set that Noel should have clear psychological sailing in his freshman year. He’s the top recruit in the country for a reason, and as of now there’s no reason to project that he’ll disappoint anyone. He might not be Anthony Davis, but he’s still a defensive genius who will jump-start Kentucky’s offense and nullify a lot of his teammates’ mistakes with his 7-foot-4 wingspan and his excellent shot-blocking ability. And just like Davis, he’ll be reintroducing a revolutionary hairstyle to the culture. Last year, it was the unibrow; this year, it’s the flat-top. So forget the lowered expectations; Calipari’s Young Blue Machine marches on, slashing and burning and winning.

Fourth-and-Short: The Eagles Can't Help Themselves