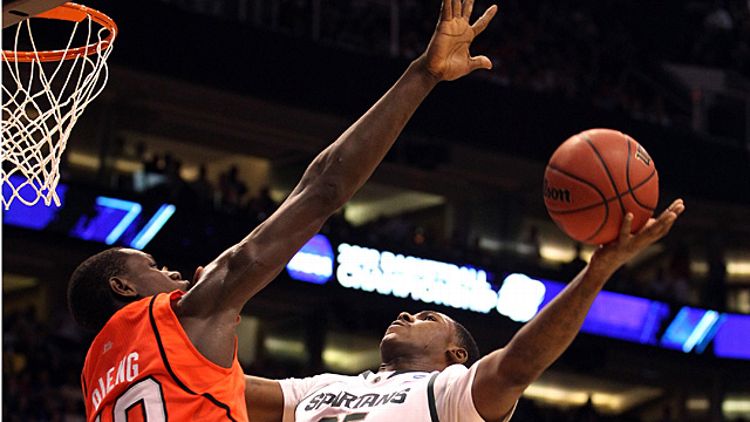 Today we’ll be looking at my third-team All-Americans and All-Defensive Team, with the first- and second-teamers coming out tomorrow. All stats come from ESPN and Ken Pomeroy.

Note: I will be using the Harrison Barnes Rule — no freshmen on the All-American teams. Surely one or more of them will be worthy by the end of the year, but I shall not be Barnes’ed! Also, I covered the freshmen here.

The Dish: Craft is a defensive genius who will almost definitely repeat as Defensive Player of the Year in the Big Ten. He had the nation’s 13th-best steal rate (steals per defensive possessions) last year, and the third-best among BCS players. For Ohio State to live up to their no. 4 ranking, he’ll have to become more of a scoring threat and continue to have an efficient assist-to-turnover ratio as he sets up scoring threats like Deshaun Thomas and Lenzelle Smith Jr.

Five Potential Nicknames: The Robber Aaron, The Craftsman, Grand Theft Blotto, The Buckeye Burglar, Daft Craft (if he does something crazy)

The Dish: Young is a natural scoring 2-guard who excels at getting to the line and shoots a high percentage from 3. He dropped 31 on Florida last season, and as a sophomore we can expect more of those standout performances. He may have slipped under your radar as a freshman, but it won’t be long before he’s a household name among college basketball fans. He’s my pick to lead the SEC in scoring.

The Dish: It’s easy to overlook Crabbe in a conference where it seems like only Arizona and UCLA matter, but the tall guard is a great shooter, and he probably won’t face many top-tier defenses. He’s worked on overcoming a cautious nature over the past two seasons, and this year he’ll be teaming up with Justin Cobbs, another talented guard. If there’s a sleeper in the Pac-12, it’s Cal, and Mike Montgomery will count on Crabbe to help his team compete with the (re-)emerging West Coast juggernauts.

The Dish: This is a highly speculative pick, since McAdoo played in the shadow of Tyler Zeller and John Henson last season. He didn’t make his first start until the ACC tournament, when Henson hurt his wrist, but his postseason play was strong enough that he considered jumping to the NBA. He’s obviously a talented scorer, and he plays with power and grace inside, so it’s no surprise that he made the coaches’ preseason All-ACC team. He could become the best forward in the ACC, and he certainly has the potential, but after averaging only about 16 minutes per game last season, I’m going out on a bit of a limb even putting him on the third team.

The Dish: It’s a done deal that Mitchell will head to the NBA after this year, and he’s projected as a top-10 pick. He doesn’t get much TV exposure at North Texas, but he’s a strong bruiser who put up the fourth-best defensive rebounding percentage in the country and the 15th-best block percentage last year. He’s still gaining polish on the offensive side of things, particularly in his mid-range game, but he will shine in the Sun Belt and his draft status seems destined to improve even more. North Texas lost in the conference championship game last season, but they’ll be favorites to advance to the tourney this season, and with any luck America will get a chance to see Mitchell on the big stage in March before he becomes a top NBA rookie next season.

The Dish: Snaer is best known for his dramatic game-ending 3s from last season, and rightly so, but his ability as a lock-down perimeter defender often goes unmentioned. He’s the most intense competitor in the ACC, and that quality serves him well in the mano a mano defensive duels that define many Florida State games. Leonard Hamilton is a defense-first coach, and Snaer is his cornerstone. I’m already salivating over the December 5 game against Florida, when you have to imagine Snaer will draw the free-shooting Kenny Boynton.

Five Potential Nicknames: None. Michael Snaer has the perfect last name for a defensive genius, and I’m not going to be the one to mess with that.

The Dish: Being considered a top defender in the Big Ten is like being considered fat in the Mall of America — you really have to earn it. And Oladipo does, with the kind of raw athleticism that drives other guards crazy (and produces some pretty epic dunks, too). He gained discipline last season, a key step after an uneven freshman season, and this year he’ll duel with Craft for the honor of best defender in a defense-heavy league.

The Dish: There’s been exactly one quadruple-double in NCAA history (Lester Martin, 2007), but if there’s one player capable of managing it this season, it’s Withey. He’s a blocking machine — rejecting shots at a higher rate than even Anthony Davis — and the kind of interior force who inevitably pushes opposing offenses out of the paint. He showed in last year’s NCAA tournament that he has it in him to become a strong rebounder. He’s incurably slim, and his post moves need work, but on a Kansas team with sneaky talent, he should make a killing on defense and boost his scoring into double digits.

The Dish: The Big East doesn’t name an all-defensive team, but if they did, Dieng would likely have been a unanimous pick. The Senegal native will be one of the best rim protectors in the country again this season (he was 21st in block percentage last year), and his ability to alter shots and discourage penetration will be the interior spark in a very strong Louisville defense. Like Withey, you simply cannot get to the hoop on this guy.