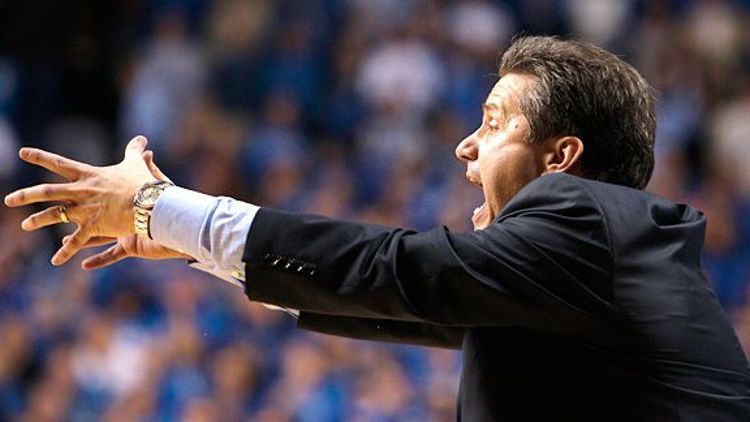 When it’s all said and done, the history books could show that this Kentucky team was coach John Calipari’s best team ever. Well, the NCAA history books will probably show that Calipari coached for only five years and the 2002 Memphis team that won the NIT was his best team ever, but whatever. The point is, this year Kentucky’s roster looks like someone is playing a video game and either put all the best players on one team or edited the player ratings and turned Kentucky’s guys all the way up. Hell, you could close your eyes and throw a dart at a team picture of Kentucky and chances are the guy the dart hit would be the best player on 95 percent of college basketball teams. (I originally wrote that last sentence as hyperbole, but the more I think about it, the more I’m convinced it’s true. Kentucky really is that talented.)

Like most Calipari-coached teams before it, the main concerns for Kentucky this year will likely be its inexperience and its lack of a knockdown outside shooter. But really, these two things shouldn’t be too much of a problem and are only mentioned as concerns by college basketball analysts because Kentucky is pretty much flawless. In truth, with the exception of Vanderbilt, none of the elite teams in college basketball really have all that much more experience than Kentucky, and while the Wildcats might not have a knockdown 3-point shooter, Darius Miller and Doron Lamb are both more than capable of making it rain. Besides, even if these are both legitimate flaws, Kentucky has as many as five future lottery picks on its team (freshmen Anthony Davis, Marquis Teague, and Michael Kidd-Gilchrist, and sophomores Lamb and Terrence Jones), so the simple fact that this is clearly the most talented team in the country should be more than enough to make up for any lack of experience or legitimate outside shooting threat.

We’ve got you covered on college hoops, from Midnight to March Madness.

• The 50 Greatest College Basketball Players of All Time

• Why Duke Will Win the National Championship

• Why North Carolina Will Win the National Championship

• Why Kentucky Will Win the National Championship

• Why Ohio State Will Win the National Championship

• Why Syracuse Will Win the National Championship

Considering he’s in the same conference as those five Kentucky guys and Florida’s Brad Beal, you’d be hard-pressed to find anyone who thinks Jenkins is the best NBA prospect in the SEC. But you’d also be hard-pressed to find anyone who thinks there’s a better college player in the conference than Jenkins. In his sophomore season last year, the 6-foot-4 guard led the SEC in scoring with 19.5 points per game and at times looked unstoppable (like when he poured in 32 points against Kentucky in February). His ability to hit anything inside of half court is what gets all the attention, but calling him a “shooter” is an injustice to the rest of his game, since the “shooter” label is usually reserved for unathletic guys who rarely step inside the 3-point line. The truth is, Jenkins is an all-around natural scorer with a quick first step and relatively good ball-handling skills who can score in a variety of ways. Like traditional shooters, Jenkins knows how to use screens to get himself open and can knock down catch-and-shoot 3s with the best of them. But what sets his game apart and makes him especially dangerous is his ability to use his athleticism and ball-handling to create his own shot. Defenses will likely key on Jenkins all season long, but with teammates like Jeffrey Taylor, Brad Tinsley, and Festus Ezeli (when he comes back from his six-game suspension) all having the ability to pour in points too, it will be impossible for them to devote all their attention to Jenkins. With a talented cast around him, I expect Jenkins to get more open looks than someone of his caliber ever should, which should result in a big year from him this season.

With Vanderbilt losing to Cleveland State on Sunday, I should probably put the Commodores here, but screw it — I still say Vanderbilt is a top-10 team once Ezeli comes back.

I’m not so sure about eighth-ranked Florida, though. On the one hand, the Gators have probably the best backcourt in the country with Erving Walker, Kenny Boynton, Mike Rosario, and Brad Beal all having the talent to average at least 15 points a game this year. (Walker and Boynton both have averaged 14-plus ppg in the past two seasons, Rosario averaged 16-plus in his two seasons at Rutgers before transferring, and Beal is considered to be the best shooting freshman in college basketball.) With any combination of those four guys on the floor, Florida can push the tempo and run teams out of the gym, like it did against Jackson State on Friday, when it won by 40.

But on the other hand, with the loss of Vernon Macklin, Chandler Parsons, and Alex Tyus, Florida is pretty undersized when compared to other elite teams, and its best frontcourt player (Patric Young) averaged only 3.4 points and 3.8 rebounds a game last year. The Gators will no doubt have success in fast-paced games in which they can spread the floor and let their four guards do their thing, but the fact that none of their four best players are taller than 6-foot-3 has to be some cause for concern, especially in their upcoming game against Ohio State and Jared Sullinger on Tuesday, and their two games against Terrence Jones and Anthony Davis of Kentucky in the regular season.

Having the best backcourt in the country will definitely be enough for Florida to win a lot of games this season and compete with Kentucky and Vanderbilt for an SEC championship, but it’s hard to imagine the Gators not hitting a few speed bumps along the way because of the question marks surrounding their frontcourt.

Alabama in the SEC is a lot like Marquette in the Big East — it was picked to finish just a little bit better than the middle of the conference standings and it has virtually no chance at actually winning the conference. But, it does have one of the conference’s best players (well, two, in Alabama’s case), and it could easily upset some of the conference favorites. A year ago, the Crimson Tide had their bubble busted on Selection Sunday and had to settle for a trip to the NIT (where they eventually lost to Wichita State in the championship), but don’t expect that to happen again this season. With forward JaMychal Green and his 15.5 points returning for his senior season along with junior forward Tony Mitchell’s 15.2 points and 7.1 rebounds per game, Alabama figures to be a major player in the SEC this year.

This is a long time coming for Alabama fans. With the exception of the 2004 run to the Elite Eight, the term “Alabama basketball” has been a bigger oxymoron over the past 20 years than “CBS comedy.” Sure, the Crimson Tide have been to their share of NCAA tournaments, including five straight appearances in the mid-2000s, but once they’ve gotten to those tournaments, they typically haven’t done much of anything. So cheer on the Crimson Tide this year and hope that the combination of Green, Mitchell, and sophomore guard Trevor Releford is enough to take them on another deep March run, only this time in the Big Dance. And if zero Final Fours and only one Elite Eight isn’t enough reason, cheer for Alabama because if there is such a thing as communities using sports to help lift spirits after a tragedy, then maybe Alabama basketball can do its part to cheer up the people of Tuscaloosa after the devastating tornado in April. Sure, Crimson Tide fans would probably rather have the football team do well, but the basketball team also making some noise in March certainly isn’t going to hurt anything.

When most people think of Vanderbilt, the first thing that comes to mind is a school crawling with so many preppies that within five minutes of stepping on campus Zack Morris would cream his J. Crew khakis in amazement. Others might think of this website’s namesake, Grantland Rice, or Jay Cutler briefly taking the Commodores’ football program to one step above complete irrelevance. Whatever the case, very few people equate Vanderbilt with success on the basketball court. But that could change after this season.

Even though Vanderbilt dropped a turd in last year’s NCAA tournament with an upset loss to 12th-seeded Richmond in the first round and followed that up with a stale fart of a performance against Cleveland State on Sunday, I still have high hopes for the Commodores this year, mostly because they are a veteran team who return their top seven scorers. The main attraction of this group is Jenkins, but as I mentioned earlier, he’s far from Vandy’s only weapon. Senior forward Jeffrey Taylor and his 14.7 points per game from a season ago also return, as does Ezeli, who averaged 13 points last year. With senior point guard Brad Tinsley’s 10.6 points and 4.6 assists per game also returning, there’s no denying that Vanderbilt has the talent to challenge Kentucky for the SEC title this season and possibly even contend for a national title in March. Of course, keep in mind that I only said they had the talent to compete for a national title. I don’t actually expect them to, though, because in recent years Vanderbilt has been an even bigger underachiever in the NCAA tournament than Pitt.

I would typically never tell you to cheer for the top recruit in the country who is playing for the second-ranked team in the country, but I’m making an exception for Davis for two reasons — Mike Jones and Joe Flacco. Allow me to explain.

As a high school junior two years ago, Davis stood 6-foot-3 and had less of a chance to get a Division I basketball scholarship as I had to … well … get a Division I basketball scholarship. But then Davis hit a monumental growth spurt, shot up to 6-foot-10, and then started, in the words of Bill Raftery, “straight up merking fools.” Before long, he grabbed the attention of every college basketball coach in the country and became the most coveted recruit in all of America after being unknown a year earlier. This year, he figures to be the low-post anchor for Kentucky and has a legitimate chance to be the no. 1 overall pick in the 2012 NBA draft. In other words — and this is what’s important here — Davis has the most compelling rags-to-riches story since Mike Jones revealed in 2005 that hos weren’t all on him until he became hot.

But more important than anything else, Davis has a unibrow. I’ll say it again: The no. 1 recruit in the country, who is currently playing for the no. 2-ranked team in the country, has a unibrow. As of right now, the only unibrow in sports that I can think of that rivals his belongs to Joe Flacco. This means that if Davis has a monster year, leads Kentucky to the Final Four, and doesn’t make thousands of guys across America want to quit fantasy football forever, there’s a chance he could single-handedly make the unibrow cool, which would undoubtedly be the greatest accomplishment of his life.