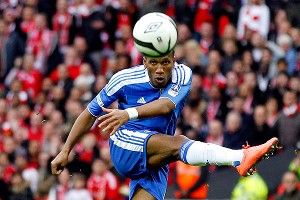 Even if Chelsea defeats Blackburn in the league on Sunday, they can finish no higher than sixth. Anyone who watched their abject performance against Liverpool earlier this week could see that this was a team treating the end of the Premier League season like the kids at Lee High School treated the last week of classes in Dazed and Confused. They lost, 4-1. They’ve only won one of their last five Premier League matches. But with an FA Cup already on the shelf this season and another trophy to play for, they don’t seem overly worried about appearances.

On May 19, Chelsea plays Bayern Munich, in Munich, in this season’s Champion League final. The West London club is quite literally banking on victory in Germany as their way back into the lucrative competition next season. If they lift the European Cup, they get to come back and defend it. If they lose, they’ll be taking trips to Zurich and Bucharest in the UEFA Europa League. (I hear Bucharest is really nice that time of … oh, never mind.)

For most clubs, this would be one hell of a gamble. Champions League football — the money and prestige that comes with it — has become an addiction for Europe’s top teams. They need the infusion of cash to keep their wheels moving, they need the television exposure to build their global brands and they need the honor, for lack of a better term, of playing in Europe’s top club competition to keep their best players.

Chelsea, actually, doesn’t have these problems. With owner Roman Abramovich’s seemingly bottomless pile of capital to draw from, missing out on Champions League football won’t impact their bottom line. Last May, Manchester United got a footballing lesson from Barcelona in the Champions League final at Wembley. For their troubles, United were awarded more than €50 million in prize and television money. Abramovich blew £40 million on Fernando Torres and £30.8 million for Andriy Shevchenko. And Deco! You know what a Roman Abramovich’s renewable energy source is? Money!

Chelsea have been accused (by me) of introducing an era of financial doping to European football, paying exorbitant transfer fees and wages, fleecing less rich clubs of their finest talent. Manchester City might be the new kids on the big spending block, but Chelsea are still impervious to the fiscal realities facing most football clubs. Teams like Arsenal and Tottenham and Newcastle desperately want to finish in the top four (or three, this season) so they can keep players like Robin van Persie, Luka Modric and Cheick Tiote happy. This isn’t a concern for Chelsea. Their players simply can’t earn more money anywhere else (save City). And even if they lose May 19, they will almost certainly be back in the Champions League, sooner or later.

This should make Chelsea seem all the more onerous, but oddly enough, I almost find their single-mindedness about the Champions League trophy — something long-coveted by Abramovich — to be … romantic. I suppose it’s a romance Chelsea have the means to pursue. Their league form may not have been particularly inspiring. They’ve clearly decided it is Champions League or bust. But you can’t call it tanking if you can afford it.