Cats Down Bulldogs: Are Kentucky’s Road Woes Over? 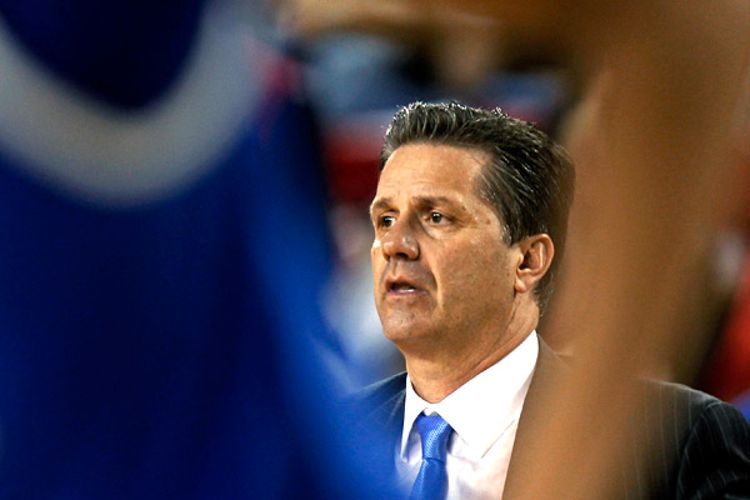 1. Kentucky is second-best in the country at defending shots from inside the arc, holding opponents to a 38.5 percent shooting rate.

Long story short, Georgia scored 44 points as the no. 1 Wildcats extended their record to 20-1. The lead was never under 10 in the second half, and Kentucky took another step toward erasing its reputation as road kill.

Let’s examine that reputation in-depth and see if it truly deserves to be abolished.

The knock on Kentucky coach John Calipari — well, one of the knocks on John Calipari — is that by recruiting superlative freshmen who tend to leave school early for the NBA, he deprives his clubs of the maturity needed to win an NCAA title.

But that word, “maturity,” strikes me as deceptive. Relatively speaking, maturity is a personality trait that doesn’t correlate to age. I’m 29, and I get angry at video games. Somewhere in the world, there’s a 12-year-old who has to take care of his younger siblings by himself. If that kid is more mature than me, then surely an average 18-year-old can be just as mature, if not more so, than a 21-year-old.

The better word is “experience,” and in that regard, age matters. Learning the rhythm of the college game is one thing, but even more importantly, acclimating to a hostile road environment is a process that takes at least a year. Coming out of high school, there’s no way to anticipate the moment when you confront a rowdy student body away from home. Freshmen are bound to struggle more than their elders, and that has hurt Kentucky in the past. Let’s look at Calipari’s first two years in Lexington:

2010-11: Kentucky, a team that went on to make the Final Four, finished 3-7 in true road games, including 2-6 in the relatively weak SEC. At home, the Cats went 15-0. Three of the top six players were freshmen.

2009-10: This is the DeMarcus Cousins-John Wall-Eric Bledsoe freshman team. Despite having the most talented group in the country, and dwarfing any other SEC team in pure ability, they still dropped two conference road games and nearly lost three more, to Auburn, Vanderbilt, and Mississippi State. At home (8-0 in conference, 18-0 overall), their average SEC end-of-game margin was +14.1. On the road, it was +6.0. You could argue that the disparity wasn’t all that irregular for a top-tier team, but when you consider the sheer talent of that Kentucky team, the fact that they were a couple shots away from 3-5 in a weak conference is remarkable.

This season, despite an unlucky road loss at Indiana, the Cats have looked stronger away from Rupp Arena. It’s still a small sample size, but at 3-0 in conference, their average margin of victory is in double digits. Has anything changed?

The proportion of freshmen is similar. Michael Kidd-Gilchrist, Anthony Davis, and Marquis Teague all play starter’s minutes, and of the other three main contributors, two are sophomores. The freshmen are talented, of course, but the freshmen at Kentucky have been talented for the past two seasons. You could argue that at least two of the freshmen, Davis and Kidd-Gilchrist, are exceptionally “mature” for their age, but as we said, maturity doesn’t atone for experience.

It’s also tempting to believe that defense makes the difference. The Cats are ninth in overall defensive efficiency, second in defending the 2-point field goal, and first in block percentage (thanks in large part to Davis, a block machine). But in 2009-10, Kentucky was even better, finishing sixth in overall efficiency. Other factors, like team offense and strength of conference, are also relatively consistent.

The only conclusion to draw is that Calipari’s crew is destined for two or three conference losses in the remaining games. We may have seen a hint of what’s to come in a three-point escape against Tennessee two Saturdays ago. Here’s the remaining road schedule:

Four of those opponents (excluding South Carolina) represent the stiffest competition Kentucky will face all year, while the three teams it has already played on the road represent the worst. If you want to make some money from your friends at relatively low risk, make them give you 10-to-1 odds that Kentucky will lose three of those five road games. Experience is an earned commodity, and history backs you up.

What about a national championship? Conventional wisdom says that teams who win a title have a fortunate combination of talent and experience, meaning that Kentucky is bound to fall short yet again. To assess the accuracy of that idea, let’s look at the last few title winners.

2011: UConn. Led by an upperclassman, Kemba Walker, with role players across the years, including two freshmen (Jeremy Lamb and Shabazz Napier).

2009: UNC. Two seniors and three juniors in the starting five.

2007: Florida. Joakim Noah’s group. They were all juniors, except for Lee Humphrey, a senior.

2004: UConn. Emeka Okafor, Ben Gordon, and Taliek Brown led the team as upperclassmen. Josh Boone was a big contributor as a freshman.

2003: Syracuse. The only major senior contributor was Kueth Duany. Carmelo Anthony and Gerry McNamara were freshmen, and Hakim Warrick was a sophomore.

So. With the exception of Syracuse in 2003, no freshman-heavy team has won a national title in the last decade and change, and no team dominated by underclassmen has won besides Syracuse and Florida. You could go back further and find that it holds true for most of the ’90s, and my guess is that it would also be relatively consistent if you looked at Final Four teams.

Experience, for what it’s worth, does seem to matter. When you pick your bracket this year, it would be wise to leave Kentucky off that lonely line in the middle.