Carmelo Anthony’s Legacy Is on the Line 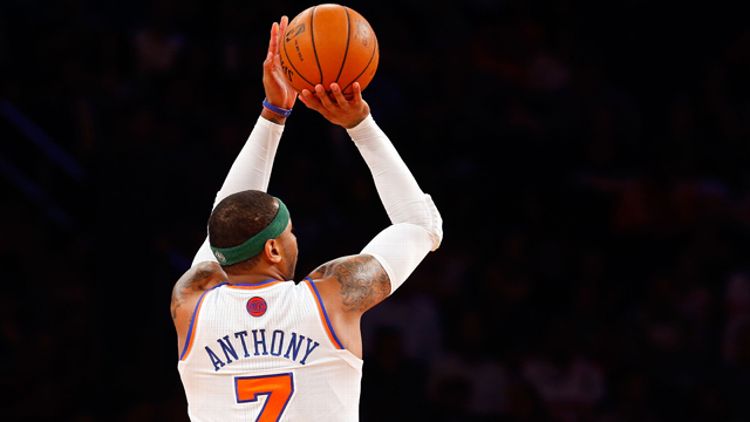 At the Knicks’ anticlimactic last game of the season Wednesday night, a ⅓-filled Madison Square Garden was treated to a meaningless victory over the Hawks, which featured a 1-for-11 shooting night from recent signee Quentin Richardson. The night’s most substantial cheer came when it was announced that Carmelo Anthony had been named the Eastern Conference’s Player of the Week. He was nowhere to be found, though: New York’s star forward sat out for the second consecutive game, preserving a slim-but-insurmountable lead over Kevin Durant in the race for the scoring title.

Anthony is the player whose reputation most hinges on a strong performance in this postseason. He’s the leading scorer in the league, the brightest star in the biggest market, and a Brooklyn-born savior that the franchise cleaved apart to obtain. During the Knicks’ 15-1 stretch over the last month — excluding the meaningless loss on Monday to the Bobcats in which Anthony sat out — he’s been a one-man scoring monsoon with a 50-point cloudburst, two 40-point floods, and only four games in which he scored below 28.

He’s also the owner of one of the worst individual playoff records in the history of the NBA. In nine trips to the postseason, he’s escaped the first round only once.

If the Knicks perform respectably in the postseason — making the Eastern Conference Finals will be the threshold for that — Anthony will inevitably be applauded for having “learned” something — trusting his teammates, buying into coach Mike Woodson’s orthodoxy, discovering what it really means to be a leader, for example. But should New York flame out against Boston or Indiana, Anthony will be castigated as a gunner whose bloated numbers have again proved hollow on the most important stage.

For those who can’t wait for such insipid psychoanalysis, a sharper critique of Anthony’s game is already under way within the stat-head community. While Knicks fans are optimistically scraping barnacles off the “Melo for MVP!” bandwagon that plunged into the Hudson River a month or two ago, the numbers should make you less enthusiastic. If you feed Anthony’s season of endless 30-point efforts into the grinder, what emerges is unimpressive sausage.

In fact, a recent article in Forbes named Anthony the NBA’s most overpaid player, using a “wins” metric as the primary argument. “As the new breed of statistical analysts like to point out,” writes Tom Van Riper, “a primary scorer using extra shots to get his points means fewer shots for others (and hence fewer chances for additional points for the team).” In other words, Anthony scores a lot because he shoots a lot. He’s nowhere in the stratosphere of LeBron James or Durant, the author claimed, before adding a final zinger: “He’s not even Tyson Chandler.”

It’s true that all of Anthony’s visible brilliance — the silken jumpers, bullying drives, and graceful post spins — is geared toward only one result: scoring. He’s been very good at it this season, too, mostly because a healthy diet of 3-pointers has cut into his junky midrange bingeing. By true shooting percentage, Anthony is lodged in the second tier of volume scorers, alongside guys like Kobe Bryant, Stephen Curry, and Dwyane Wade (Durant, James, and James Harden rise above that fray in a tiny, three-man caste of highly efficient big-time scorers).

But unlike any of those players, Anthony brings only scoring to the table. He’s an unremarkable rebounder at small forward (but weak at the 4-slot, where he’s spent most of this season), has a sloppy 1:1 assist to turnover ratio, and rarely contributes steals or blocks. Early in the season, his newfound defensive intensity was lavished with orgasmic shrieks of “OMG, he’s buying in!” but even his staunchest advocates have abandoned that angle. Only one Knick who plays more than 15 minutes a game has a worse defensive rating than Anthony — and that’s Steve Novak, a dude with the tenacity of a vanilla milk shake wrapped in newsprint.

So Anthony, despite all those New York Post back-covers, is a role player with a glamorous job. Harold from Accounts Receivable doesn’t want to discuss Anthony’s career-low 2.6 assists a game. No, he wants to rave about those 36 points that Melo dumped on the Thunder’s domes a few weeks back.

Still, during Anthony’s torrid stretch, he’s been the kind of bucket-making machine that doesn’t need to do anything else. The Knicks are cresting at the right time, largely because he’s been a human fireball who turns defenders into small, smoking piles of ashes. In eight April games, he’s shot 54 percent from the field and 47 percent from deep, while averaging 37 points a night. He’s even chipping in 10 boards a game this month. Those are MVP-type numbers, albeit spanning just a modest slice of the season.

So can Anthony silver-surf his recent waviness into the playoffs? Probably not. According to vorped.com, he’s shooting almost 46 percent of his shots from midrange over the last month, up from a season average of 39 percent. And while he’s been nailing more than half of those shots, that’s likely an unsustainable rate. Anthony’s surge hasn’t been based on a philosophical adjustment of his game — he’s being rewarded for bad habits. (There’s a sliver of good news for Knicks fans here, though: J.R. Smith’s improvement has coincided with a 5 percent drop in the number of midrange jumpers he’s taken.)

Setting aside both stat-mongering and soul-inspection, the Knicks’ playoff fortunes depend almost entirely on Anthony remaining white-hot. They’ve been a mediocre defensive team all season, yet snatched the no. 2 seed in the Eastern Conference thanks to a trifecta-centric offense that’s tied for fourth-best in the NBA. If Melo is just Melo, that’s not enough to win a title. But if he can continue playing like Dirk Nowitzki circa postseason 2011, all the pieces are in place for a Mavericks-esque run. That’s one elite scorer — temporarily playing as if he were deposited on the planet by an alien spacecraft — surrounded by guys doing all the other stuff. Chandler and Jason Kidd are already familiar with the routine. But does Raymond Felton know he’s Jose Barea?