Cam Newton and the Diversity of Carolina’s Zone-Read Package 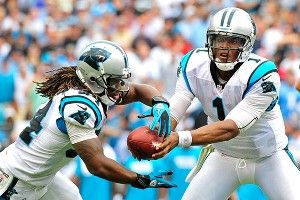 In Week 1, the Carolina Panthers’ listless offense turned over the ball twice, gave up three sacks, and registered a grand total of 10 — yes, 10 — rushing yards. Last week against the Saints, Carolina exploded for 35 points and 219 yards on the ground while Cam Newton averaged an amazing 12.7 yards per pass attempt. The Panthers looked like the offense it was for much of last season, and they did it by getting back to what is, for them, basics — the read-option running game.

Newton is a one-of-kind offensive weapon, and his abilities to both be a threat to run the ball and make accurate run-game reads make everyone on the Panthers offense better, including his wide receivers. Steve Smith had Carolina’s biggest play of the day — a 66-yard catch in which no one on New Orleans’s defense was within 20 yards of him. As Newton explained after the game, Smith was the direct beneficiary of Carolina’s dynamic rushing attack: “Of all of the people on this field to be wide open, you would think Smitty would be the last person,” Newton said. “But that is what type of pressure the zone read gives us.”

That’s the beauty of the Panthers’ offense when it’s rolling. Newton led the Panthers in rushing, but Jonathan Stewart and DeAngelo Williams each added more than 50 on the ground, and Smith, Brandon LaFell, and even Mike Tolbert were dangerous receiving options. “You do read option, read option, read option and then get them to play seven or eight in the box and you’ve got so many variations of plays and passes you can run off that,” Newton said.

The most exciting part about the diversity of the Panthers’ attack, though, isn’t the mix of traditional and spread offenses, or the number of players who touch the ball. It’s the diversity within their read-option package.

The most well-known read-option run play is the “zone read” — a traditional zone-blocked running play coupled with the quarterback making a read of a back-side defender. The purpose of the zone read is really nothing more than to keep this defender from attacking the running back; otherwise it’s just an old-fashioned run play.

Ron Rivera’s Panthers had good success with these basic zone-read plays against the Saints, but they’ve also started to incorporate more advanced read-option schemes, ones that can better keep defenses off-balance and incorporate a wider diversity of blocking schemes and best utilize Carolina’s weapons. These are the plays New Orleans had no answer for on Sunday.

One of them is a play Newton made famous at Auburn — the “inverted veer” or “dash read” play. Unlike a typical zone read where the quarterback reads a back-side defender, the inverted veer reads a player on the front side — the quarterback and running back head in the same direction. Coupled with “power” run blocking with a pulling guard, the defense is outnumbered to the play side, and blocking lines up nicely.

Against the Saints, Panthers offensive coordinator Rod Chudzinski took Cam’s old inverted veer one step further by running an outside run coupled with a read of an interior defender — a “sweep read.” Carolina ran this play several times against the Saints, but the best example came in the third quarter and resulted in DeAngelo Williams bursting around the left end for a 27-yard gain. 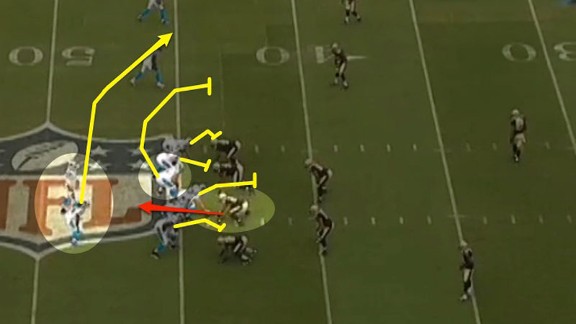 On the play, Williams runs laterally to the left while Newton puts the ball in his stomach and makes a read. The key to this play is whom Newton is reading. Unlike the typical zone read or the inverted veer, here Newton is reading an interior defensive tackle instead of an edge defender like a defensive end.

This may seem like a little change, but it’s enough to open an entirely different world of offensive options. Most NFL teams are spread-option dilettantes that never get beyond reading the defensive end (if that), and defensive coordinators scheme accordingly. With Newton, the Panthers are quickly becoming experts though, and the ability to read multiple defenders can make even a carefully calibrated defensive game plan totally, woefully wrong. Once the offense develops a system for reading different defenders, they can choose whom they want to pick on. 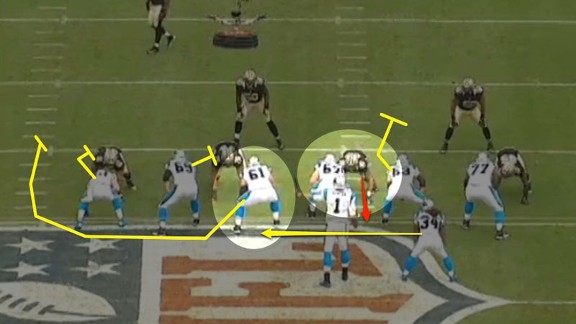 Notice what reading the Saints’ defensive tackle — here, the shade nose guard or “one-technique” — does for the Panthers. By leaving him unblocked, the play-side guard, Amini Silatolu, is able to pull and lead-block for Williams while everyone else on the line blocks back to seal off defenders. 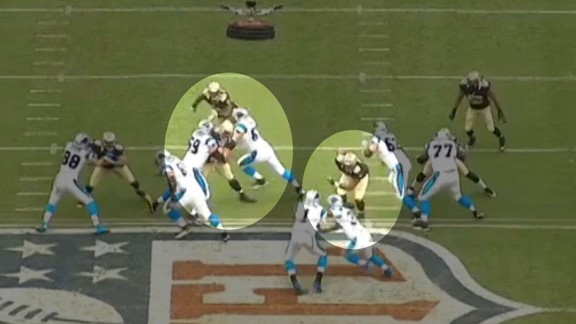 Just after the snap, you can see the play design working perfectly. Silatolu begins his pull as the Saints linebackers hesitate, not knowing if Newton will hand off or keep it. The unblocked defensive tackle does exactly what he’s been taught — aggressively attack. Unfortunately for him, what he’s been taught takes him completely out of position, and Newton simply hands off to Williams as the running back sprints to the left. Had the Saints defender tried to take away the sweep, Newton would’ve had an easy gain straight upfield. The beauty of the play is that, although it’s a read-option, based on the defensive tackle’s predicted assignment, Newton is not likely to get the ball. Changing the read defender allows the Panthers to use read-option principles without Newton taking unnecessary hits.

The final advantage gained by leaving a defender unblocked is that it allows others to be double-teamed, and here, center Ryan Kalil solidifies the blocking upfront by attacking the other defensive tackle. Note, too, the extra defenders to the right who are waiting on Newton and unable to help as Williams runs the other way. 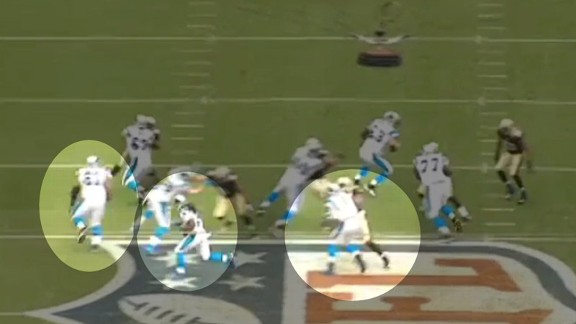 As the unblocked defender stands useless next to Newton, and Williams and his escort run unimpeded around the left end, it quickly becomes apparent that this play is going to work. 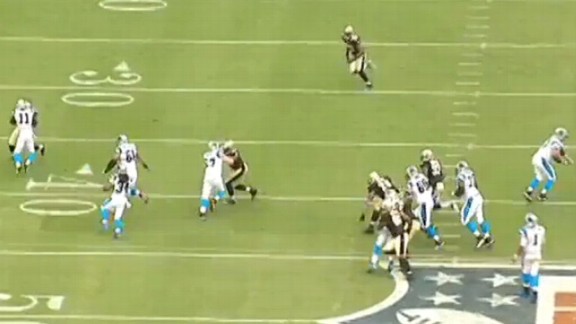 Williams was eventually tackled, but not until downfield blocking from his receivers helped him scamper for 27 yards. It’s difficult to run for big gains in the fast, athletic NFL, but Carolina’s scheme — and Newton, even when he doesn’t have the ball
— makes it a lot easier. Carolina’s opponent this week, the New York Giants, is filled with players like Jason Pierre-Paul, who are almost impossible to block one-on-one. It’s players like him that have the Panthers following an old coaching adage — if you can’t block a guy, read him instead.