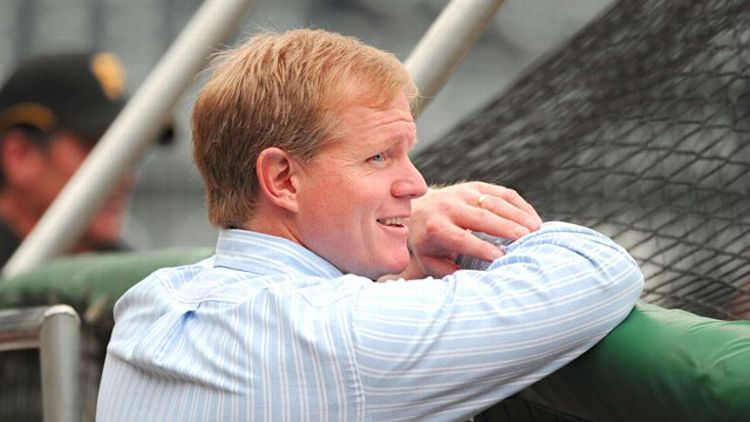 We mock general managers who, with a team on the edge of contention and the non-waiver trade deadline looming on the horizon, fail to cash in their impending free agents and pricey veterans for whatever they can get. The trade deadline is the ultimate shit-or-get-off-the-pot moment for a major league general manager, who’s paid to know the odds better than the talk radio caller who says if the Cardinals can make up 10 games in a month, so can every team. But it’s tough to surrender, particularly if, like Ruben Amaro Jr. of the Phillies or Brian Sabean of the Giants, your organization and its fans are used to winning and not quite prepared to declare the end of a period of prosperity. It’s even tougher for Dayton Moore of the Royals or Alex Anthopoulos of the Blue Jays, whose organizations and their fans have known nothing but disappointment in the past decade or more, and whose aggressiveness this past offseason hasn’t been rewarded with success.

But if your team’s got, say, a 5 percent chance of making the playoffs this season, and you know you’re not quite out of it yet, it’s very difficult to fold, even when you like your chances better in coming years and giving up significant assets to hang around this year would hamper those future chances.

That’s why Neal Huntington’s trade-deadline sleight of hand over the past two seasons is so clever.

In 2011, the Pirates reached their high-water mark on July 25, six games over .500 and tied for the lead in the NL Central. It was a strange run that always seemed unlikely to continue, but with Pittsburgh having been devoid of winning seasons since 1992, Huntington was under pressure to double down. So on July 30, Huntington acquired first baseman Derrek Lee for Aaron Baker, whose résumé and career accomplishments aren’t worth reciting here. The next day, Huntington picked up Ryan Ludwick from San Diego for cash, and presumably enough of it to cover Ludwick’s airfare from San Diego to Pittsburgh.

In 2012, once again finding his team in a first-place tie with clearly superior opponents in late July, Huntington sent three minor leaguers to Houston for Wandy Rodriguez.

These are not moves befitting a team with designs on a World Series title. They aren’t the franchise-changing swaps that, in recent years, have included Mark Teixeira, Cliff Lee (twice), CC Sabathia, Manny Ramirez, and so on. But in 2011, Huntington got two veteran position players for a team that would finish the year with a collective OPS of .676. He could spin Lee publicly as an impact bat, a man two years removed from hitting .306 with 35 home runs and finishing in the top 10 in MVP voting. And for what it’s worth, Lee did hit .337/.398/.584 in 113 plate appearances after the trade. Ludwick had hit 37 home runs in 2008 and been a fixture on some pretty good Cardinals teams. And Lee and Ludwick cost him as close to nothing as you can get without paying literally nothing.

Rodriguez came with a bit more of a price, as one of the three minor leaguers Pittsburgh gave up — outfielder Robbie Grossman — is an actual prospect and not just organizational filler. But Rodriguez, who has a player option for next year, is not a rental. With Houston potentially kicking in more than $10 million in salary, he represents (when healthy) a pretty good midrotation starter on a relatively cheap deal. If Huntington was worried about contending in 2013 and 2014 when he made the trade, Rodriguez is frankly much more valuable in service of that goal than Grossman would have been.

That Huntington didn’t give up much in value is of paramount importance, because Pittsburgh is, with Starling Marte, Gerrit Cole, and Pedro Alvarez, starting to reap the benefits of one of the game’s more exciting farm systems. With Jameson Taillon and Gregory Polanco not too far behind, more help is on the way. Trading away those assets for Michael Bourn, Ubaldo Jimenez, Hunter Pence, or one of the other big names to move might have gotten the Pirates an extra win or two down the stretch, but nowhere near the production they’d miss when those young players finally all came together, as they’re doing now.

By making lower-risk, less-splashy moves, Huntington kept his team in a position to contend both at present and in the future. When Huntington took over the Pirates in 2007, the organization was like a failing bar that had been burned down so the owners could collect the insurance money. With first place in his sights in 2011 and 2012, Huntington still managed to resist the urge to overreach, showing admirable restraint for a man in his position. The result? The Pirates are now 19 games over .500, only 1½ games out of first place and a virtual lock to make at least the play-in game. They have a young, cheap core and enough farm system surplus that if Huntington wanted to make a run at Jake Peavy or Howie Kendrick, he could do so and still have prospects to spare.

And he managed to do it while still pulling off the illusion of having been a buyer. If the depletion of the free-agent market and the addition of the second wild-card spot have narrowed the pool of sellers at the trade deadline, many teams would do well to be “buyers” like this.