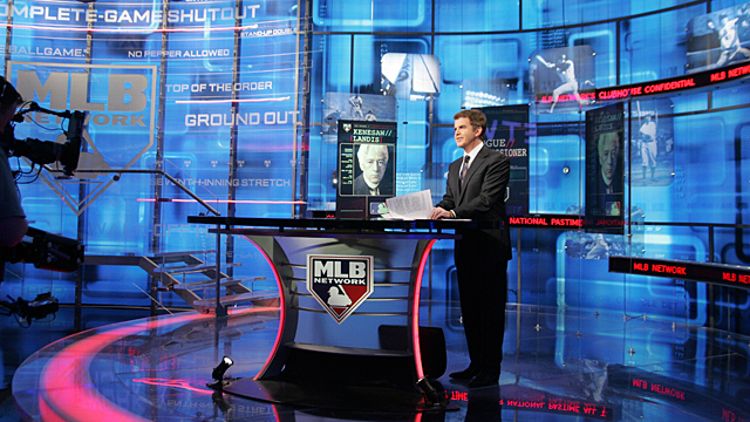 If Brian Kenny has a tell, it’s his eyebrows. Flip over to MLB Network — where Kenny is a studio host, talking head, and defender of sabermetricians — and you’ll see his eyebrows shoot up until they form twin quotation marks on his forehead. This means Kenny is about to blow his top. Like Fox News’s Shep Smith or ex-CNNer Jack Cafferty, Kenny is a guy you can count on to get angry when the world stops making sense. Watching him stew is just about the most wonderful thing on sports TV.

Last month, the producers of MLB Now provoked Kenny by playing a tape of Hawk Harrelson, the White Sox broadcaster, bagging on advanced stats. “Stay calm,” Kenny muttered to himself. Then, cue the eyebrows. “Where do I even start?” Kenny said. “Where do I even start? Hawk Harrelson, I really enjoy his work as a broadcaster. Why would he feel the need to attack the advances in knowledge in baseball over the last 25 years?”

Kenny pointed out that three teams — the Rays, A’s, and Red Sox — had all won by using advanced stats. Harold Reynolds, one of Kenny’s MLB Network foils, tried to butt in. “Let me speak,” Kenny said sternly. “I’ve got to deal with Hawk. Then I’ll deal with you.” He jabbed his finger: “Hawk, three teams in your league. It does work. You missed the revolution.”

Harrelson came on MLB Now two weeks later to confront Kenny. Hawk had a bluff assurance about him, like those media types who thought Nate Silver was full of it. All these metrics, Harrelson explained, were useless. Baseball was “a game of TWTW — The Will to Win.” You could see the equation forming in Harrelson’s head:

Kenny had heard this kind of pushback before. He tried an ingenious move. Kenny put up the numbers from Hawk’s 1968 season with Boston, when he flirted with the Triple Crown. Then, by adjusting for era and park factors, Kenny made Harrelson’s numbers better. Kenny was suggesting that by ignoring sabermetrics, Harrelson, for the first time, was underrating himself. All Harrelson could do was sputter that he was actually better the next season, in 1969.

Brian Kenny was born in 1963. In his youth, he was an amateur boxer who trained alongside Mike Tyson in Cus D’Amato’s Catskill gym. After college, Kenny took the test to become a Nassau County cop. If sportscasting hadn’t worked out, you could almost imagine Detective Kenny standing on a rain-swept beach on Long Island, cracking wise with his partner. Kenny spent a decade at WTZA-TV, a station that’s slogan was “From the Tappan Zee to Albany.” He made it to ESPN in 1997.

Kenny hosted SportsCenter, a nightly radio show, and Friday Night Fights. But his best work was as ESPN’s bulldozing, dyspeptic interviewer: Roy Firestone with acid reflux. And when Kenny faced off with boxer Floyd “Money” Mayweather, he found his ideal sparring partner.

In one of their early meetings, in 2006, Kenny pressed Mayweather on why he was promoting his bout with Zab Judah as a title fight when Judah had lost the belt. (Mayweather had the peculiar habit of refusing to consider a man a real champion until they were sharing a pay-per-view card.) Mayweather countered, “Brian Kenny, you do not know about boxing.” But I think Money had admiration in his voice when he suggested, “You can be my Howard Cosell, and I can be your Muhammad Ali, if you want to. You want to be Howard Cosell?”

This was merely the prelim, for the May 2009 Kenny-Mayweather interview proved their most memorable bout. Kenny introduced Mayweather as the former best pound-for-pound fighter on the planet. Mayweather bristled at the word former.

Mayweather: “How am I not the best pound-for-pound fighter in the world? You tell me.”

Kenny: “Because you retired?”

Anybody can yell at an athlete about an “issue” that fits neatly on a chyron. Kenny is a journalist. His blow-ups have a point. Here, he wanted to pierce the bubble that would have Mayweather bluster about his willingness to take on any fighter (“I’m not duckin’ and dodgin’ nobody”) and then subject prospective opponents — in this case, Manny Pacquiao — to a gauntlet of promoters, monetary demands, and steroid testing. (Mayweather was fighting Juan Manuel Márquez, who’d lost to Pacquiao.)

Why not fight Pacquiao, Kenny asked again and again?

“No, you didn’t,” Kenny said. “I must have missed it. What are you talking about?”

Since Kenny joined MLB Network, in 2011, his anger has flashed in the service of advanced stats. Since the publication of Moneyball, sabermetrics has colonized large tracts of the print media. Even an idiot can write OPS into his copy instead of batting average. But TV guys — particularly color analysts — have held out. There are a few reasons for this. Former athletes aren’t interested in advanced stats; they don’t want their careers reevaluated with new metrics; they don’t like the idea of the strongbox of baseball wisdom passing from their hands into Dave Cameron’s.

Kenny is a post-Moneyball announcer. He thinks Rock Raines should be a Hall of Famer and that Mike Trout was the rightful 2012 American League MVP. “Bill James,” he has said, “was the first person I saw who opened my eyes to logical thinking.” Kenny welcomed statheads like Rob Neyer and Joe Sheehan onto his show, Clubhouse Confidential, and gave the opening address at the 2013 SABR Analytics Conference.

MLB Network deputized Kenny to pin down ex-jocks on stats the way he’d once pinned down Mayweather on Pacquiao. Last November, the network put Kenny and Keith Olbermann against Billy Ripken. Kenny and Olbermann supported Trout for AL MVP. Ripken admitted Trout was the best player in the league but thought the MVP should go to Miguel Cabrera because of, among other factors, his clubhouse “presence.” “His presence in the locker room allows somebody …” Ripken must have seen Kenny raise his eyebrows, because he stopped short. “Oh, yeah,” Ripken said. “Presence.”

“Presence!” Kenny moaned. It’s telling that Olbermann was the calm one.

Last month, Orioles manager Buck Showalter went on MLB Now. By now, Kenny’s reputation as a noodge preceded him. There would be blood. Kenny noted that in terms of runs scored and runs allowed, the 2012 Orioles had vastly overperformed.

“You’re probably going to say we can’t do it again, right?” Showalter asked.

“It would be a tough bet,” Kenny said.

“So which way you bettin’?”

“Um-kay,” Showalter said, adding that he’d tack the prediction to the clubhouse wall.

The value of these exchanges isn’t just the friction. As with Kenny’s interviews with Mayweather, there’s value in subjecting a blusterer to a thorough interrogation. No one denies that Showalter is a smart guy. But to listen to him bash sabermetrics is to transform him into Eric Wedge. “If we gave up 12 runs one game,” Showalter asked Kenny, “and won the next game, 1-0, how does that figure in?” He went on to dismiss “pie charts.”

“You got to critique the critiquers …” Showalter continued. “We’ve got some people putting stuff in there that don’t know the difference between a slider and a cutter.” (And they say sabermetricians are the snotty ones.)

Harrelson had his own homespun wisdom when he met Kenny and Reynolds last week. Hawk spoke of a manager who had to call his GM to ask if he could tell his player to bunt. Stats ignored that “the first rule in baseball is catch the ball.” Moreover, Hawk explained, sabermetrics simply hadn’t matured. “And until it gets ready, the TWTW’s going to supersede anything.”

Kenny tried to point out that the argument wasn’t just about TWTW versus UZR. It was about refusing to look at evidence and learn something new about baseball. “Wouldn’t you want to know what the actual percentages were?” he asked.

“No!” Harrelson and Reynolds said at the same time.

Their answer was so churlish, so deliberately blinkered, that for once Brian Kenny looked relatively serene.