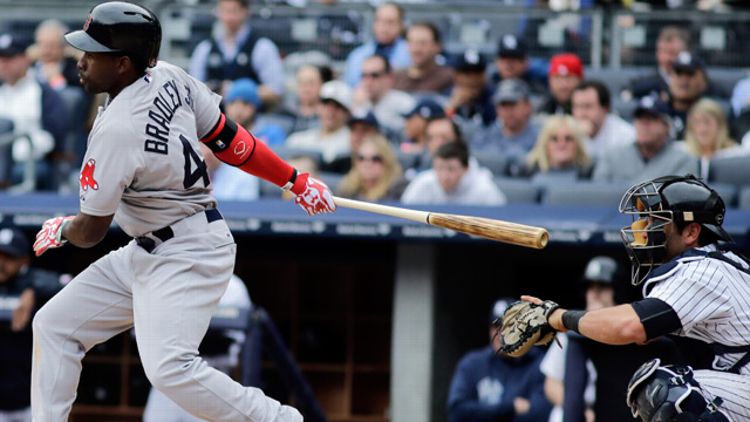 Eleven more days. If the Red Sox wanted top outfield prospect Jackie Bradley Jr. to become a free agent after the 2019 season rather than 2018, all they had to do was keep him in the minors for 11 more days.

They didn’t wait. The lefty-swinging Bradley was in the lineup on Opening Day, against one of the toughest left-handed pitchers in the game, CC Sabathia. And while one game’s results mean virtually nothing, they did show what the Red Sox hope to get from the move: a team with more speed and athleticism than Boston’s had in years.

From 2010 through 2012, the Red Sox finished 24th in stolen bases and 28th in Baserunning Runs. Though those teams did field a speedy Jacoby Ellsbury type or two, these were also the teams of David Ortiz, Kevin Youkilis, and Adrian Gonzalez, patient, powerful hitters acquired to drive opposing pitchers insane and put a bunch of crooked numbers on the board. As long as those core hitters were swatting 25-plus homers and posting near-.400 OBPs, management could live with station-to-station baseball.

That didn’t happen last year. Racked by injuries and down years from several key players, the 2012 Sox ranked just 15th in homers. Far more surprising was their walk total. The team that for years carried ultra-patient hitters like Ortiz, Manny Ramirez, hell, the Greek God of Walks himself, suddenly stopped walking. Only the always walk-averse Royals totaled fewer bases on balls than the Red Sox, whose walk rate was a microscopic 6.9 percent.

Finding a superslugger on the open market who’d immediately inject 35 homers and 100 walks wasn’t going to happen — free agency, after all, is dying. But Shane Victorino was available. Over the past six seasons, Victorino ranked ninth among all players in steals (190) and fifth in Baserunning Runs (38.1). Meanwhile, new starting shortstop Jose Iglesias stole 32 bases in 261 minor league games, and more generally graded out as a plus base runner. Victorino and especially Iglesias figure to upgrade Boston’s baserunning ability, as well as the team’s perennially strong Red Sox defense.

On the other hand, Victorino is a mediocre hitter against right-handed pitching who, at age 32, is probably past his prime. Iglesias hit .264/.313/.314 in the minors; if the Sox can get Rey Ordonez–level offense from him, they’d probably take it.

In Bradley, the Sox get a player with speed (24 steals in 138 minor league games), athleticism, and defensive prowess, who also draws walks (91 BB and a .423 on-base percentage in 615 minor league plate appearances). Two and a half weeks shy of his 23rd birthday, he’s an intriguing source of upside for a team mostly comprised of veterans who’ve already reached whatever level of potential they were going to reach.

Those skills, and that upside, were on display Monday. In his first major league plate appearance, Bradley fell behind against Sabathia 0-2, only to work all the way back for a key walk, one that helped ignite a game-deciding, four-run rally. He’d go on to walk twice more on the day, a less impressive feat, given Yankees pitchers struggled with command all day and noted hacker Jarrod Saltalamacchia snared a hat trick of walks himself, but still a pretty notable accomplishment for a player’s major league debut. Neither Bradley nor any other Red Sock stole a base, but they did show off their speed when needed, with Bradley beating a throw to second off a chopper by Iglesias that scored the first run of that four-run second inning.

But the highlight of Bradley’s day came in the bottom of the third. With two outs and a man on second, Robinson Cano smashed a drive to deep left. Bradley, who came up through the minors as a center fielder and had little experience playing the slices that come with being a corner outfielder, raced back to the track, and in a near dead run, made a leaning, lunging catch to save a run, ending the inning, and squelching what might’ve become a game-changing Yankees rally.

Both the Red Sox and Bradley figure to have more of their share of struggles as the year wears on, Boston trying to rebound from its worst season in 47 years, and Bradley looking to avoid the many pitfalls that face rookies not named Trout or Harper. But for one day, Sox fans caught a glimpse of the future, when Bradley, Xander Bogaerts, and other top prospects take the reins from Ortiz and the other holdovers from Boston’s title teams. Given how miserably last season ended in Boston, these new memories can’t come soon enough.