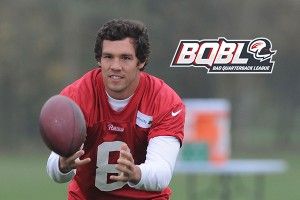 This week in BQBL was just … well … weird. We had TAINTs, we had benchings, we had a postgame Mike Vick act like he was in an eighth-grade relationship gone bad — breaking up with Andy Reid before Andy Reid could break up with him. Yet we didn’t have a single quarterback score more than 50 BQBL points. Also, despite some gloriously terrible things, two of our top three scorers gave their respective teams a good chance to win the game. The other one? Well, let’s just say that whatever impressionable British youths the NFL was hoping to convert with this “football” game in London are likely buying Tom Brady jerseys, not Sam Bradford jerseys.

Oh yeah … also, totally unrelated, but I need to share this with the world. Bryant McKinnie of the Ravens owes Trick Daddy’s father $375,000 for “services accumulated at South Florida strip clubs.” Sure, this has nothing to do with the BQBL, but … BWHAHAHAHHAHHAHA!!!!

With 5:13 left in the fourth quarter, it was Kellen Clemens time. Jeff Fisher decided that the British had seen enough Sam Bradford and trotted out ol’ Kelly Clemmy to give it a shot. It was tremendous. Ladies and gentlemen, Kellen Clemens’s magnificent seven-play drive:

3:45 left in fourth: Kelly Clemmy rolls out to his right and gains five yards for a first down. Moving. The. Ball.

2:59 left in fourth: Kelly Clemmy fumbles the snap and gets demolished by four Patriots while recovering it.

2:22 left in fourth: Kelly Clemmy throws a perfect ball down the sideline between two defenders for 39 yards. For real, that was a nice throw.

2:00 left in fourth: Kelly Clemmy hands to Pead for eight yards up the middle. Again — Moving. The. Ball.

1:38 left in fourth: Kelly Clemmy drops back, pump fakes, and … wait, before I move on with what happens next, I would like to talk about this pump fake. When you see Peyton Manning or Drew Brees work a pump fake, it’s usually one of those “Oh hey, safety, you thought I was going to throw that out pattern, didn’t you? Guess what? Over the top for six” pump fakes. Kelly Clemmy’s was more of a “[starts to throw] Wait, that receiver dude is going to turn around, right? [Waits.] Oh, he turned around. Guess I’ll throw it” type of pump fake that even the Patriots’ secondary could pick off.

I think we will see more of Kelly Clemmy, as I don’t believe much in Sam Bradford’s future as a starting quarterback. Don’t get me wrong — none of that is based on film study, knowledge of the position, or how his skill set fits into the modern NFL offense. It is 100 percent based on his face. Sam Bradford does not have a starting-quarterback face. It isn’t a matter of being handsome, either (see Manning, Peyton). It is just an indescribable, intangible thing, and Sam Bradford ain’t got it. My apologies to the Bradford family. It’s not your fault. I am sure he is a great kid. He just doesn’t have a starting-quarterback face.

Dallas Cowboys (Tony Romo, 44 points): Romo has a long, well-documented history of big-game bed-shittery, but this was different. I am going the other way with this one — Romo played well. For real, in real life, not in that confusing BQBL “Is bad bad or is bad good?” type of way. Sure, the first four possessions didn’t start the way he wanted them to (pick, pick, fumble/punt, TAINT), but there aren’t a lot of guys that can start a game like that and finish with 437 yards passing. By now, you have all seen how this game ultimately ended. Dez Bryant caught a touchdown pass with six seconds left on the clock that put the ‘Boys up by one. Little did we know, Dez Bryant has an innate fear of damaging his butt cheek with an unbroken fall. Said fear led his hand to the ground before said butt cheek. Said hand was out of bounds. Touchdown and season-hinging victory reversed. Romo’s label as a big-game bed-shitter perpetuated. Balance to the BQBL force restored.

Carolina Panthers (Cam Newton, 38 points): I picked this week for sophomore-slumpy Cam Newton to land in the BQBL top three, but I never thought he would look this good doing it. A lot of people have a lot of negative things to say about Cam Newton this season, and who am I to criticize? Saying bad things about quarterbacks is how I make a living. But I am going to give Cam credit where credit is due. He played a hell of a game on Sunday. Yes, you read that last sentence correctly. First off, let’s consider his opponent — the Bears defense. The Bears defense is seventh overall, first against the rush and first in TAINTiness. The Bears defense is three TAINTs away from being the TAINTiest defense in NFL history, and it is Week 8. All that changed Cam’s Sunday performance from a doubters-hushing win to a louder-doubters loss was one poor throw.

With 6:52 left in the fourth quarter, the Panthers had the ball and a 19-14 lead in Soldier Field. All Cam needed was a clock-chewing, crowd-killing, critic-silencing drive. The drive started on his own 20-yard line, and on his first snap, he threw a touchdown pass … to Bears cornerback Tim Jennings. With that one throw, Cam watched his five-point lead turn into a one-point deficit. With that one throw, he brought the Chicago crowd to life. With that one throw, he put the pressure of turning the game around right back on his shoulders. And that is exactly what he did. With the next possession, just a few minutes of real time later, he got back under center and marched the Panthers down the field for a field goal that gave them the lead with 2:20 left to play. Did the Panthers win? No. Did Cam Newton play well enough to win against one of the best defenses in the league? Yes. Am I only writing nice things about Cam Newton because I feel residual guilt for immediately jumping off his bandwagon and onto RG3’s in Week 1? Probably.

Chicago Bears (Jay Cutler, 31 points): Jay Cutler, what the hell are you doing here? Oh yeah, three turnovers, only 186 yards passing, no long passes … but none of that matters. HAVE YOU SEEN THE JAY CUTLER COMMERCIAL? He’s funny, likable, his hair looks a kazillion times better than it does on Sunday. Is Jay Cutler, like, a normal, likable bro-terback? He can’t be, right? That’s crazy talk. I want the raw reels from this commercial shoot. He must have gone Christian Bale at some point just to stay on brand. He must have.

Cleveland Browns (Brandon Weeden, 27 points): Where have you been, Brandon Weeden? I expected so much more from you this season. Sure, you keep putting up solid BQBL numbers, but I had bigger plans for you. To be honest, that’s not even true. I thought that you would be long gone by now (same for Colt McCoy) and the BQBL leaderboard would be dominated by the stylings of Opa-Locka, Florida, and Duke University’s own Thaddeus Lewis. If we make it through Week 17 without a Thaddeus Lewis sighting, I am going to consider your success a failure, Brandon Weeden.

New York Giants: OK, we have now reached the point in the column where I am writing about guys that had good games. Time to put a stop to this and get to next week’s predictions.

Clairvoyant Jacoby’s picks for next week’s leader board:
1. Titans: Matt Hasselbeck and Rusty Smith against the Bears’ TAINTy secondary? Yes please.
2. Vikings: Ponder’s Progressions is poised for a return as the Vikings face the Seahawks in Seattle.
3. Bills: For no other reason than that I haven’t written the word “Pickspatrick” in a while. He’s due.

As always, e-mail us at triangle@grantland.com with any BQBL-related comments, questions, and insults.