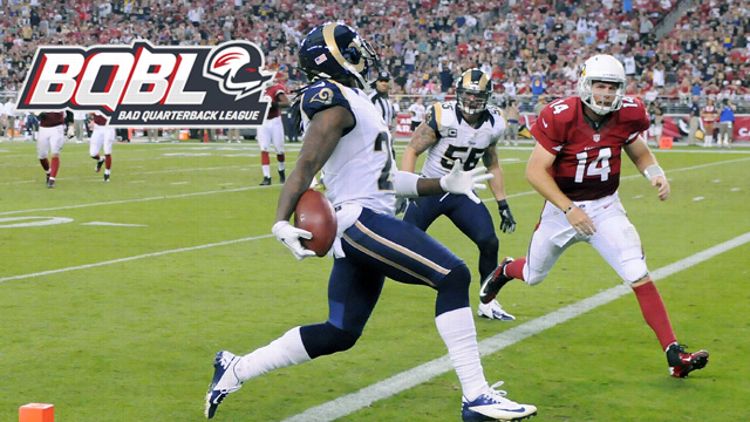 How did Chad Henne only score five BQBL points? How did Mark Sanchez only score four? Wait, Lauren Tannehill’s husband was in the red with -7 points? When I first saw the numbers for this week I thought that our scorer must have gone on a four-day “The only way to stop the sounds of my family is by drowning them with alcohol” binge, but when I saw who was on top of the leader board, it all made sense. Since Thanksgiving weekend has no mascot like Santa Claus or the Easter Bunny, I am nominating Ryan Lindley. His fear-driven failure on Sunday was a calming transition to life as usual after a weekend that was anything but in both your life and in the NFL. Let me explain.

Cardinals (Ryan Lindley), 80 points: Last week, Ken Whisenhunt introduced us to rookie quarterback Ryan Lindley, and we watched him make it through his first NFL game without throwing an interception. He didn’t look great, but he didn’t look Skeltony either. After getting a week’s worth of reps with the first team, his true test came Sunday against the Rams. Let’s have a look at the pass attempts during his first drive as a starting quarterback:

1st pass: Lindley hits Housler out of backfield for six yards (Lindley, 1-for-1). Not bad.

3rd pass: Incomplete, as Fitzgerald runs a stop pattern while Lindley throws a go pattern. Fitzgerald looks back at his rookie QB and points to himself with a gesture that says “Nice pass, my fault.” No one on the sideline, in the stands, or watching at home is convinced he really means this (2-for-3).

4th pass: After play action, Lindley puts a deep out on Andre Roberts for 11 yards and a first down (3-for-4). Lindley is looking solid.

7th pass: Lindley again hits Fitzgerald on a slant, this time for 13 yards (6-for-7). Lindley is learning quickly that getting the ball to Fitzgerald and watching him do Fitzgeraldy things is a winning combination.

8th pass: Fitzgerald clears the slot with a decoy route and leaves Roberts wide-open for a 21-yard gain to the 1-yard line. Beanie Wells punches it in on the next play (7-for-8).

Lindley started hot. Granted, most of the plays on this drive were scripted, practiced, short passes meant to build his confidence, but completing all but one pass and driving the length of the field for a touchdown is a great start for any quarterback, let alone one making his first start. He should have passed the rest of the game — not thrown passes the rest of the game, but just passed on the opportunity to play. It did not go well. After that first series, it was like the Rams secondary had a sideline huddle and said, “Guys, he can’t throw deep, and he’s too terrified to go through his progressions. Just jump every route. We will either get a couple TAINTs or Ryan Lindley will torch us with a ton of double moves. If Ryan Lindley torches us with a bunch of double moves, we will all perform ritualistic suicide on the 50-yard line after the game. You with me?” Sure, it seemed like a dramatic proposal at the time, but it worked out:

1st pick: After watching Lindley stare down his receivers and only throw short passes for the first drive, Janoris Jenkins straight-up leaves his man before the ball is even thrown and steps in front of a ball intended for LaRod Stephens-Howling before taking it to the end zone for a TAINT.

2nd pick: Fitzgerald runs deep. Lindley throws way less deep, and before Fitzgerald even gets his head around, a Ram has the ball. Fitzgerald does not make one of those “that was my bad” gestures after the play.

3rd pick: The announcer called this throw “kind of off-balance.” I call it “throwing like you were blindfolded, spun around, and trying to hit a piñata.” It did not reach its target; it reached Janoris Jenkins, who again TAINTed it to the end zone.

4th pick: Fitzgerald had it in his hands, bobbled it, had it in his hands again, bobbled it again, got hit, and then the ball did that thing where it floats in the air waiting to get picked off by the nearest defender. It was. On the bright side, Lindley laid a nice hit to finish the play.

Packers (Aaron Rodgers and Graham Harrell), 45 points: Aaron Rodgers was just, like, normal on Sunday night. He didn’t have a Romo-ish breakdown. He didn’t even have two picks. He just kind of wasn’t himself. He put up a 17.3 QBR, which was his lowest in a game with 20 action plays since 2008, according to ESPN Stats and Information. He only threw one touchdown, his lowest total in a game since Sept 24. And he didn’t look like himself — more on that later. First, let’s have a closer look at his pick. Actually, let’s just list the Top Five Most Interesting Things About His Pick instead:

3. Corey Webster, the interceptor, completely left his man open to jump the route. How come cornerbacks are never burned doing this?

1. His cadence is “33 … ready … go.” READY GO? That is what NFL teams use? Ready fucking go? Seems so pedestrian.
After a nearly a full game of being Aaron Rodgers the Civilian instead of Aaron Rodgers the MVP Touchdown Machine, he was mercifully replaced by Graham Harrell. Graham Harrell looks like Matt Barkley after a jail stint. I hope to see more of him in the future.

Saints (Brees), 45 points: This entire BQBL performance happened in about 40 minutes of real time. Here they are:

0:43 left in second: Kaepernick is picked off throwing deep-but-not-quite-deep-enough to Kyle Williams. Kyle Williams is always listed as “K. Williams” online, which leads to 20 seconds of me imagining Katt Williams as an NFL receiver. I hope Kyle Williams has a long and successful career, because I love those 20 seconds.

0:38 left in second: Drew Brees throws a perfect deep pass to Devery Henderson, who makes a great catch but can’t get two feet in bounds.

0:31 left in second (the next play): Drew Brees pump-fakes to his left expecting the coverage to shift and Jimmy Graham to come open for an easy completion in the middle. Before and after the pump-fake, Jimmy Graham is triple-covered, yet this does not deter Drew Brees. Ahmad Brooks TAINTs it to the house.

11:42 left in third (Brees’s next pass attempt): Brees throws deep for Marques Colston. Colston elevates, catches the ball, and looks to be returning to earth in possession of the football. Dashon Goldson decides to do something about that last part. As Colston is returning to earth, Goldson dives though his feet, upends him, and sends the football into the arms of Donte Whitner, who TAINTs it. It was not a great 40 minutes for Drew Brees. More important, did you know that “Drew” isn’t short for “Andrew?” Homeboy’s name is just Drew. I respect that.

Steelers (Charlie Batch), 43 points: Charlie Batch was predictably atrocious this week in place of Ben Roethlisberger. Three picks, no TDs, and only 199 yards passing. While we’re on this name thing, did you know that Batch’s middle name is D’Donte? No, that is not a typo.
Chiefs (Brady Quinn), 37 points: Not–Tom Brady Quinn threw for 126 yards, no touchdowns, a pick, and finished the game only one score behind Peyton Manning. That makes no sense.

Browns (Brandon Weeden), 31 points: When was the last time you looked at the Browns and said, “Well, at least they have a franchise quarterback?” Never o’clock? Full disclosure, I said this after a big Colt McCoy game two years ago, but that was based mainly on the fact that his name is Colt McCoy.

Raiders (Palmer), 22 points: Remember last year when Carson Palmer was plucked from the golf course and put behind center in the NFL? I think it was a bad idea for all involved. I asked this last year and I will ask it again this year: Are we REALLY sure that Carson Palmer is right-handed?

1. If Batch is still starting for the Steelers he will do amazingly terrible things against the Ravens defense.
2. Not–Tom Brady Quinn is going to be part of next week’s BQBL leader board even if he is playing the Panthers.
3. Palmer vs. Weeden has potential to be legendary. Unless Palmer realizes that he is actually left-handed before Sunday, which is always in play.

The Loser's Advantage: Saban vs. Muschamp vs. the Playoff