Bowl Seasonal Affective Disorder: Six Signs That an Embarrassing Upset Could Happen to YOU 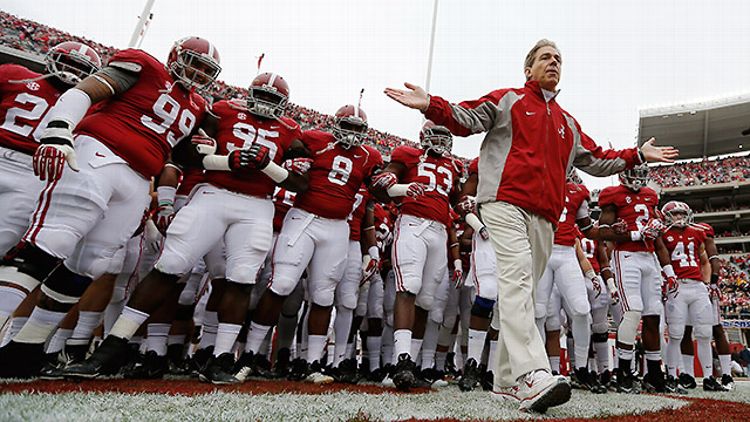 Are you looking forward to bowl season? Well, what if I told you that your team could be facing death at any moment? (By “death” I mean “an embarrassing loss,” but down here in SEC country, that’s just as bad.) I’m not a doctor or a college football player, but my dad’s a doctor and I’ve spent 20 years as an armchair quarterback, so I can speak with some authority.

Don’t think it can happen to your school? Well, in 1998, Kansas State didn’t think so, either. The usually inept Wildcats were a bona fide juggernaut that year, vaporizing their first 11 opponents by an average of 38 points per game and climbing to no. 2 in the country under coach Bill Snyder. All they had to do was hang on against no. 10 Texas A&M in the Big 12 championship game, and a national-title shot against Tennessee in the Fiesta Bowl was virtually assured.

But when the Aggies won in double overtime, the dominoes started falling. Because the loss dropped the Wildcats to no. 3 in the BCS standings, the Fiesta was out of the question; because K-State wasn’t a name-brand program with an established track record of attracting ticket sales or TV viewers, the other BCS bowls all passed, as did the Cotton and the Holiday. K-State fell all the way to the Alamo Bowl, where an unranked Purdue team stunned the listless Wildcats, 37-34.

You may think your team has done all the right things this season — cutting out carbs, getting enough sleep, putting a defender on that dude hanging out in the end zone so he can’t return a missed field goal 109 yards for the winning touchdown — but that doesn’t mean it’s safe from K-State Syndrome. Every year, a few teams wind up thinking they got less than they deserved come bowl berth time, and frequently, those feelings of disappointment are enough to negate big advantages in talent, coaching, and everything else.

It’s called Bowl Seasonal Affective Disorder. If your team is presenting any of the following six warning signs, contact your athletic director immediately.

1. A recent setback has put your dreams on hold

Having championship dreams yanked away at the end is a surefire way to let an otherwise winnable bowl matchup go pear-shaped, and you don’t have to take Kansas State’s word for it. Hell, just ask Nick Saban. Back in 2008, his 12-0 Alabama squad could’ve started his run of national titles a year ahead of schedule, but a fourth-quarter comeback by Florida in the SEC championship game knocked the Crimson Tide out of crystal-football contention. For any other team, the Sugar Bowl would’ve been a terrific consolation prize, but not for Alabama — which went on to lose by two touchdowns to a Utah team that, while superb, probably had only a handful of players who would’ve started for the Tide.

Another cautionary tale: the 2001 BYU Cougars, who were hoping for a big-money bowl after a 12-0 start but wound up in the Liberty after losing a wild shootout at Hawaii in their regular-season finale. Against their first 13 opponents, the Cougars had averaged 47 points; in a stagnant Liberty Bowl loss to Louisville, they managed just 10.

Who’s at risk this season? Alabama’s back in the Sugar Bowl this year, and if the Tide are still grouching about Auburn’s miraculous Iron Bowl upset, they could certainly lose to Oklahoma. But an even more likely candidate is Ohio State, which would be prepping for the national championship if it hadn’t coughed up that lead in the Big Ten title game. You won’t be able to see Tajh Boyd and Sammy Watkins clearly if you’re playing through tears, fellas.

2. You don’t deal well with travel or large crowds

The other factor heralding K-State’s doom back in ’98, of course, was its lack of a proven brand name. Six years later, California found itself in a similar situation, having shrugged off a decade of irrelevance to achieve a 10-1 record and a no. 4 ranking. Between that and the Rose Bowl’s steadfast adherence to the tradition of a Big Ten–Pac-10 matchup, the Golden Bears thought they were shoo-ins for Pasadena. But the Rose handed its at-large invite to Texas instead, and the Bears fell to the Holiday Bowl, where they lost by two touchdowns to 7-4 Texas Tech.

Then there were the 2010 Missouri Tigers, who won 10 games, including an upset of no. 3 Oklahoma with GameDay in town — but fell to the Insight Bowl when the big games handed their invites to name-brand programs such as Nebraska and Texas A&M instead. Exiled to Tempe, Mizzou lost to a 7-5 Iowa team that’d limped out of the regular season on a three-game losing streak.

Who’s at risk this season? My affection for Birmingham is genuine after having lived there for seven years, but let’s be real: It’s nobody’s first choice for winter vacation, and Legion Field could get blown to pieces by a stiff gust of wind at any point. So you’ll have to forgive Vanderbilt if it’s not especially jazzed about playing in the BBVA Compass Bowl — particularly when the Georgia Bulldogs, who have the same 8-4 record as the Commodores and lost to Vandy back in October, are sunning themselves in Jacksonville.

3. Feelings of depression or inadequacy have caused you to “check out” on life

When your season has utterly collapsed, a middling bowl invite ain’t gonna lift your spirits. And never before has a team collectively declared “Ehh, screw this” as plaintively as the 2012 USC Trojans. After earning the AP’s preseason no. 1 ranking, the Trojans flamed out spectacularly in the second half of the season, losing four of their final five. When they wound up in the Sun Bowl, neither the players nor their coaches even attempted to feign excitement; players tweeted about how bummed they were to be spending New Year’s in El Paso, and the team showed up late for a welcome dinner with opponent Georgia Tech. This apathy bled over into the actual game: The Jackets, losers of seven straight bowl games, were so inept on defense that they’d booted coordinator Al Groh halfway through the season — yet they held the mighty Trojans to a single score and danced off with a two-touchdown victory.

Who’s at risk this season? Even on his best day, a Michigan Man wouldn’t be caught dead in something called the Buffalo Wild Wings Bowl. After the Wolverines ended the regular season on a 1-4 skid — with the lone victory a triple-OT squeaker against a lousy Northwestern squad — it’s even harder to picture.

4. You’ve recently lost someone important to you

It’s not guaranteed — what in life is? — but few things better set up a team for bowl-game disaster than a coach resigning under pressure or getting fired. Last year we were treated to the ugly spectacle of 6-6 Purdue, fresh off Danny Hope’s long-awaited firing, getting blown to smithereens by Oklahoma State in the Heart of Dallas Bowl, 58-14.

But it’s just as ominous when a coach jumps ship for a better job and elects not to stick around for his old team’s bowl game. For example, the undefeated, fourth-ranked Cincinnati Bearcats took a four-TD jackhammering from Florida in the Sugar Bowl following the 2009 season, and while they might have lost that game even with Brian Kelly on the sideline — it was Tim Tebow’s last game in a Florida uniform, after all — it certainly didn’t help that Kelly was already measuring the drapes in his new Notre Dame office. And in 2002, Louisville’s players found out that John L. Smith was on the verge of taking the Michigan State job while they were playing Marshall in the GMAC Bowl. The Cardinals needed a meaningless touchdown with 13 seconds left just to lose 38-15.

Who’s at risk this season? Boise State, Washington, and Arkansas State will all follow interim coaches onto the field for their bowl games this year, but the team most bummed about doing that same thing is almost certainly the USC Trojans. Interim coach Ed Orgeron won the hearts of his players by leading them to six wins after Lane Kiffin’s ouster, but Orgeron didn’t even merit an interview for the chance to make his title permanent; to the disappointment of his players, he resigned in anger and air-boated off into the sunset when USC announced Steve Sarkisian as the new head coach.

Unless it’s a big rebuilding year, teams like to think they’ll do better than the year before, so they can’t help but be disappointed if they end up in the same bowl game in consecutive years. The 2003 Tennessee Volunteers had no business getting stiff competition from unranked, 7-4 Clemson, but when 10 wins and a no. 6 ranking didn’t earn the Vols anything more than the same Peach Bowl invite they’d gotten the year before, they made their uninterest clear on the field and let the Tigers beat them by two touchdowns.

Rematches of regular-season games, on the other hand, are blessedly rare during bowl season; bowls hate them just as much as teams and fan bases do. But sometimes the bowl-selection process makes them unavoidable, as was the case for Nebraska and Washington in 2010. The Huskers had destroyed the Huskies by five scores that September — in Seattle, no less — but when a come-from-ahead loss in the Big 12 championship busted Nebraska down to the Holiday Bowl, the Huskers found themselves standing next to a familiar bunch of dudes at baggage claim at the San Diego airport. Apparently Washington had learned a thing or two in the previous three and a half months, because the Huskies embarrassed Nebraska 19-7 in the rematch.

Who’s at risk this season? Heading into the final week of the regular season, Cincinnati still had an outside shot at the AAC championship and a Fiesta Bowl invite. Instead, the Bearcats are headed to somewhat less exotic Charlotte for a return engagement in the Belk Bowl. (At least these sassy red helmets might give the Bearcats something to look forward to.) And while there aren’t any regular-season rematches this bowl season, Georgia and Nebraska will play each other in the Gator Bowl exactly one year after squaring off in last season’s Capital One Bowl — and Huskers fans in particular seem distinctly unenthused about it.

6. You’re no longer interested in or stimulated by your partner

When the opponent fails to get a team’s blood pumping, it can be difficult for that team to, you know, get it up. With a shiny new SEC title in their back pocket, the 2005 Georgia Bulldogs were hoping for a big-name opponent in the Sugar Bowl, particularly since the bowl had been moved out of the Hurricane Katrina–ravaged Superdome to the Georgia Dome just 70 miles from UGA’s campus. But Ohio State and Penn State got snatched up and the Sugar was left with West Virginia, not yet a household name under Rich Rodriguez despite winning an outright Big East title. The Dawgs didn’t take the Mountaineers seriously and dug themselves a 28-0 hole less than 16 minutes into the game; Georgia eventually mounted a rally but fell short, and WVU firmly established itself on the map with a 38-35 upset.

Who’s at risk this season? Texas A&M came into this season hoping to end up in the Georgia Dome — but for the SEC title game, not the Chick-fil-A Bowl. Some unsolicited advice, Aggies: If y’all can’t get aroused by the prospect of playing Duke, you better pop a Viagra quick. This isn’t doormat-for-the-last-two-decades Duke; this is 10-win, ACC Coastal Division champion Duke, and if the Blue Devils can take down Virginia Tech and Miami, they can make life difficult for Texas A&M — particularly if the Aggies’ generous defense can’t tighten up a bit by New Year’s Eve.

Doug Gillett (@CaptainAnnoying) is a writer based in Atlanta.