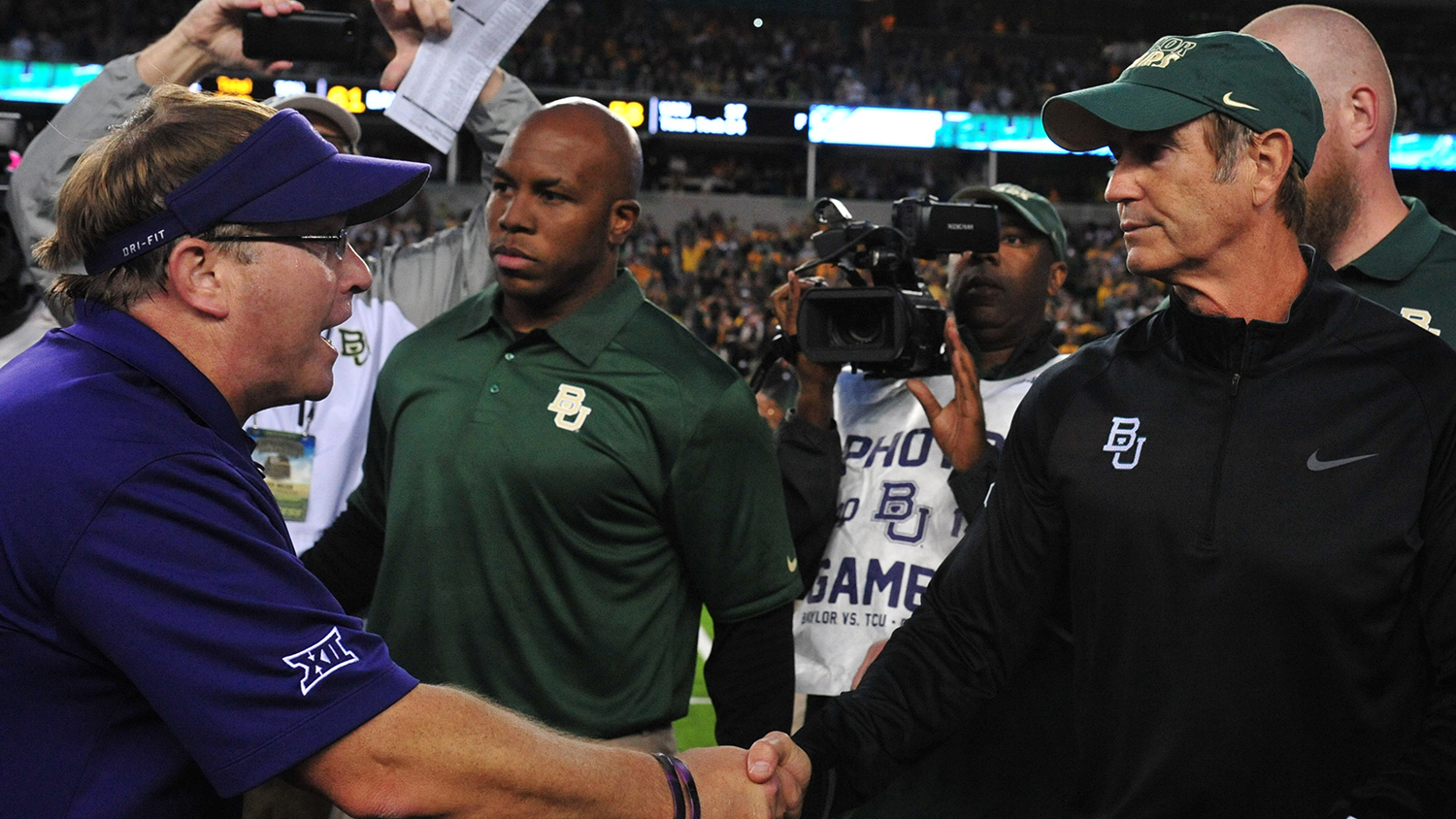 In the waning days of spring football practice at Texas Christian University, Gary Patterson sat chatting with a gaggle of reporters in a conference room that looks out over his home turf of Moncrief Field. Backlit as he was by a brightly overcast sky, framed by the pale pillars of Amon G. Carter Stadium, it was hard to tell if he might be a little green at the gills after imbibing so much offense over the past couple of weeks. Patterson’s Horned Frogs, newly outfitted with Air-Raiding wings, metamorphosed into a team of shocking offensive potency last year, a substantial shift for a defensive lifer to swallow.

If you’ve ever heard Gary Patterson speak for more than a minute, you’ve probably heard him expound on his ideal football universe, one in which his team wins every game by a single point. Under new co-coordinators Sonny Cumbie and Doug Meacham, TCU wielded the second-most prolific scoring attack in the country in 2014, averaging more than 46 points per game.1 And entering the second year of operation in the offensive overhaul, the Frogs have taken to the skies with an early ferocity. “Now every scrimmage, we get about 10 new double passes, reverse passes, throwback passes,” said Patterson. “It’s like a damn circus.”

But if ever there’s a time for a good sideshow, it’s during spring ball. Down I-35 in Waco, home of the only team to score more points per game last year than the Horned Frogs, the Baylor Bears are making offseason headlines with a marvelous freak: LaQuan McGowan, a 400-pound tight end with hands the size of gallon milk jugs, who made a splash appearance in the Cotton Bowl and whose head coach is already calling him a “cult hero.”2

There is actual football to be worked on, to be sure; new wrinkles to add in and iron out, new personnel to adjust to. TCU lost 236 tackles’ worth of linebacker with the departures of Paul Dawson and Marcus Mallet; Baylor must replace starting quarterback Bryce Petty and defensive battle captain Bryce Hager, and each program has a new coordinator on one side of the ball, following the retirement of Horned Frogs DC Dick Bumpas and Tulsa’s hiring of Bears OC Phil Montgomery as head coach.

But this offseason, the most crucial function of spring ball in both Waco and Fort Worth may have been mental. Much pored-over, occasionally hilarious, and frequently useless as a prognosticating tool, spring-game season is an oversize to-do signifying not a lot, but we collectively compensate for being so far removed from the last national title game and the onset of the next season by attaching importance to pretty much whatever we want. TCU and Baylor will both enter the 2015 campaign as conference front-runners, and both entered the offseason in sore need of a psychic reset. The events of late 2014 are going to take some getting over in this league. 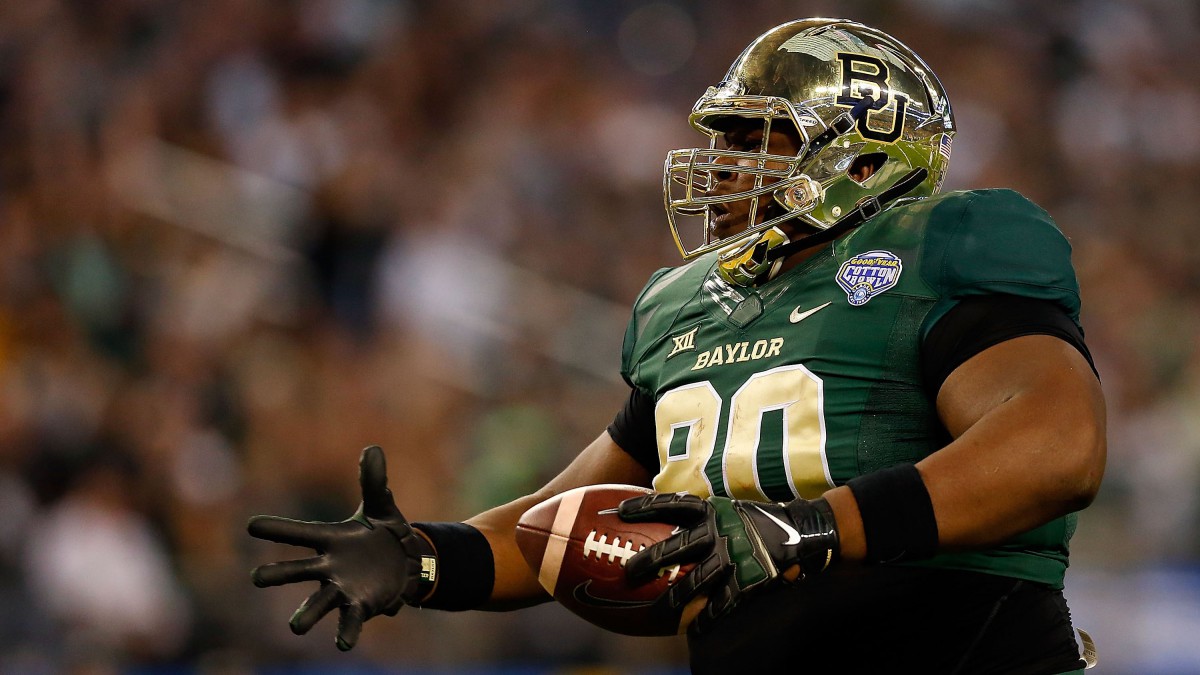 Imagine being on that Horned Frogs team, this past season, and watching the no. 4 Ohio State Buckeyes, the final team selected for the first-ever football playoff at the expense of two teams from your own league, take the title game in the JerryDome, a scant half hour from your own home field. Imagine watching while trying to avoid dwelling on the fact that Ohio State beat Alabama in the semifinals to get there, and that Alabama’s one loss during the regular season came at Ole Miss, a team you yourselves just annihilated 42-3 in the Peach Bowl.

Now imagine you’re Baylor, and you’ve just lost a heart-throttling Cotton Bowl, and you too think TCU could beat a couple of playoff teams, and you beat TCU in the regular season. From a nonpartisan, third-party perspective, whatever you think might have actually happened had either Big 12 team been selected for that final playoff spot, just try to say it wouldn’t fester in your mind. How could you not wonder? How could you not let yourself get devoured by what-ifs? Coaches deal with this kind of mass psychological sloughing every year, must coax teams past spiritual sand traps every offseason, and 90 miles and a couple hours apart in April, two scorned skippers of the Big 12 offered up nearly identical answers with a singular mind-set: It’s all about controlling what you can control.

In spring practice, controlling what you can control comes easiest. There’s lots of tangible influence to exert. There are months between low-consequence drills and real action. There are easily apparent problems to address, and a finite number of solutions to sort through. Rote conditioning tasks can take on a meditative quality after a while, with the right mind-set, and there’s nothing like literally putting one foot in front of the other to create some distance between one season and the next. While the players do that, their coaches endeavor to find a balance between using last year’s postseason as motivation and allowing their teams to dwell on it too long.

“I think you do both,” said Art Briles. “I mean, I have, from a personal standpoint, and I know our players feel the same way. I think there’s a high degree of frustration, of lost opportunity.” Briles allowed that the Cotton Bowl finish has him climbing the walls in his head some nights. “I still am … But you gotta use it for motivation, because if you allow it to beat you up, it’ll beat you up.”

A mind targeted on the present can also buffer against apprehension of a future that could keep shutting the Big 12 out of the playoffs.3 Baylor and TCU are new money, upstarts in the league of revered Texas and Oklahoma programs,4 and both coaches seem to accept as natural law that as long as college football’s postseason is determined by fallible humans — and when will it not be? — they need to be perceived as capital-B Brands to get past the gatekeepers.

Amplifying these barriers are the perception problems the Big 12 grapples with as a conference. League commissioner Bob Bowlsby emerged from spring meetings with the impression that his conference operates at a disadvantage due to its lack of a conference championship game.5 There’s been no major movement toward instituting one just yet, but the league has formalized tiebreaker rules6 to allow it to at least name a conference champion, which you’d think would be an already-cemented part of the process of, like, being a football conference in the first place, but last year, not so much!

And when you look at what all of this striving is done in service of? This brand-new solution to the college football postseason comes complete with its own unsolvable dilemma. There was no mutually satisfactory path to a four-team field in 2014, which made some late machinations of the selection committee appear downright whimsical to certain parties. “The one consistency,” said Patterson, “is it’s never going to be fair. No matter what we’ve called it in my 33 years in coaching, no matter what thing we have, whether it’s the BCS or the Coaches Poll or whatever we’ve had through the years, somebody has felt like they’ve gotten screwed.” 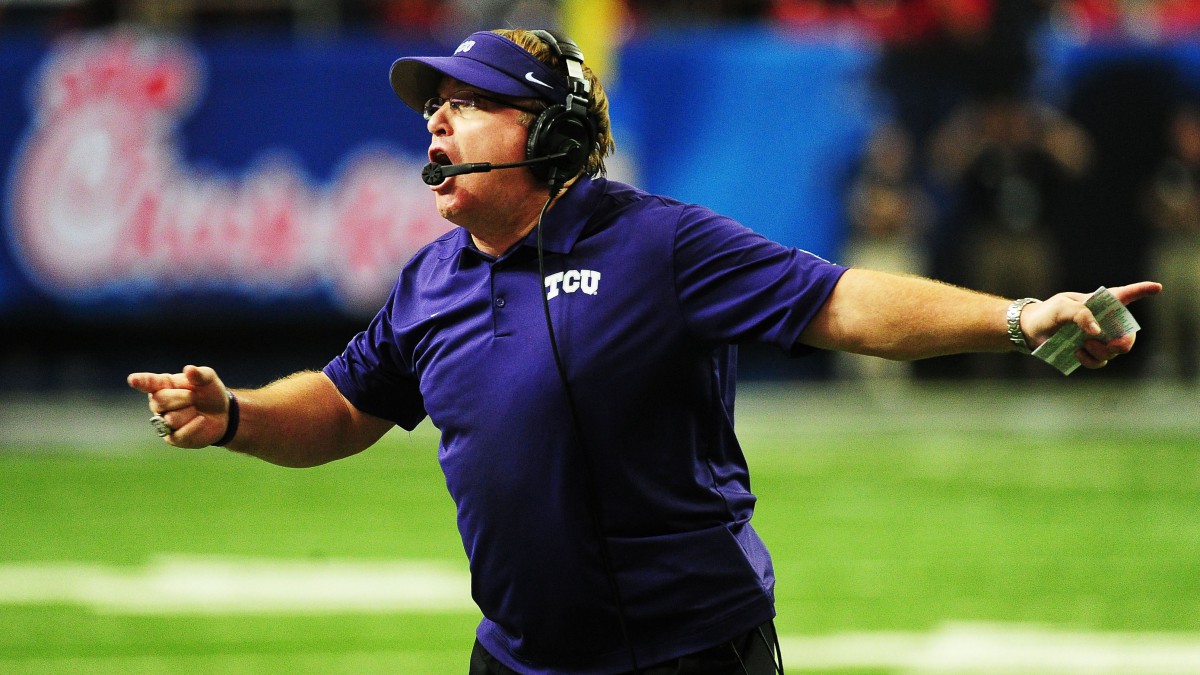 Control what you can control. Patterson and Briles are reminding themselves of that, perhaps, as much as anyone, as they hone their teams’ concentration on the here and now. If they didn’t, they’d maybe be out of their minds in a hurry. It’s kind of astonishing they already aren’t, every coach, all the time. Springtime is a fine time for inventory, and if you’ll take a moment, take a couple steps back, and catalogue every element in play here, it doesn’t take long to realize that the landscape constructed for this children’s game is a Seussian labyrinth. The host of usual obstacles and myriad moving parts that can go wrong between the last week of August and the first week of December are endless high hurdles in and of themselves; the number of teams that actually manage to go undefeated in any given year stands self-apparent as the greatest argument for how difficult that is to accomplish.

That’s just during the season. The problems of a big-time head football coach are problems you’d quickly swap yours for, maybe, but they’d still be problems once they were yours — the inequalities, the irrationalities, the insecurities, the stark unknowns. Reconciling plenty of money with little stability. Confronting the conundrum of the student-athlete, with neither money nor stability. Entitled boosters, unscrupulous agents, sniping media, the Hungry Hungry Hippo recruiting treadmill. Imagine living with and being pressured to thrive in that kind of farcical environment, to be so above reproach that you can counteract all of that plus an untold multitude of butterfly effects on and off the field, in and out of your jurisdiction, every single year. Training 18-to-22-year-old synapses not to misfire, or to misfire as infrequently as possible and if possible not all at the same time, and sometimes even that’s not enough. Squint your eyes and you’ll see Sisyphus on the top row of the stadium bleachers, pointing and laughing with a giant foam finger on each hand. Coaches are paid preposterously to cope with this preposterousness, but still: To men who’ve dedicated their lives to a game of inches measured on an x-y axis, it can’t not rankle.

There was this frenzied rush, both before and after the playoffs themselves, to shore up or tear down endless hypotheses of This Team couldn’t do what That Team did because of This Cherry-Picked Set of Factors. That’s not a new phenomenon, and it probably won’t ever dissipate. But setting aside the psychology of sport-based tribalism for another discussion, how many of us are deep down just railing against the absurdity of it all? That there will be years, a lot of them, in which we’ll never be able to determine who is best, not for sure, and that untold millions of dollars will be spent each year regardless in putting on a show saying, No, we know — lookit, shiny? There was a contrarian joy to be found, watching Ohio State win it all in January after being the last team in in December, but even then it was hard to accept that the season would conclude with no further questions taken.

All of this by way of saying: It’s a lot to process for a human brain, college football. Here at the top of the Big 12, the biggest challenges facing Baylor and TCU this spring may lie between the ears, and for them — for all of us, maybe? — spring football’s highest value may be spiritual, and this time of year most valuable. When absurdities of the season are the furthest out of sight, mathematical injustices the most readily kept at bay. The safest time to tiptoe up to the abyss, peer in, see the fewest pairs of eyes blinking back, yell “ROLL TIDE!” into the black depths for good measure, and then slink back to overthinking a preseason top 25. By August, we’ll all have regrown our thick coating of manic glee, and this will all seem normal again. Until then, anything is still possible and nothing hurts, unless you’re the guy trying to tackle LaQuan McGowan.