Bedlam in Breslin: Michigan State Steals One at Home 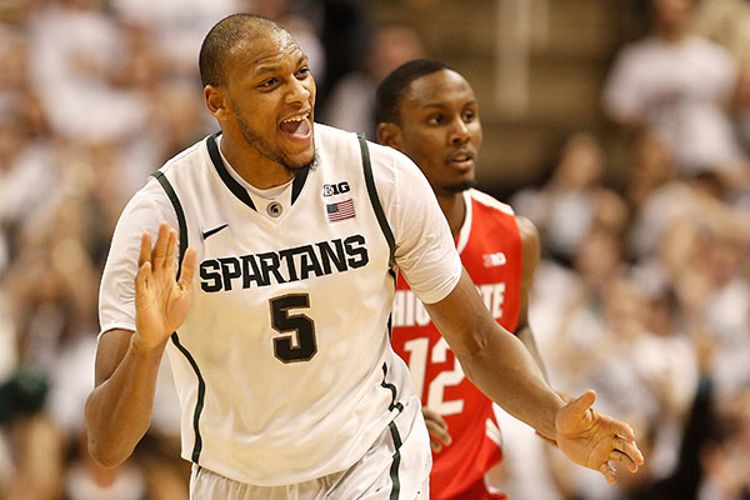 In the face of insanity, it’s important to start with logic. SO. The facts, as they will be presented in various media today, are that the Michigan State Spartans blew a late lead in regulation, barely survived to reach overtime, and then caught fire in the extra session in an eventual 72-68 home win against the Ohio State Buckeyes. As usual, though, the simple facts don’t do justice to the wild Big Ten action that went down at the Breslin Center, so let’s jump in and get our hands dirty. Real dirty, if at all possible.

Starting at the End: This Is How Close It Was

The Spartans held a 55-38 lead with 7:05 left in the game, and if you’re a top-five team IN THE LAND,* that should be more than enough when you’re playing at home. Period, full stop, end of all sentences. Instead, the nitty-gritty Buckeyes put the clamps on, allowing the home team just three more points while raging back to within one on the ultimate Aaron Craftian play (we’ll get there in a second). Adreian Payne hit a shot at the line, which gave Ohio State the ball trailing by two. What happened next was almost one of the great Big Ten road thefts of all time:

Replays showed that it was clean-ish defense by Keith Appling, and a good clear by Payne, but, man, I’m shocked that Tom Izzo didn’t faint. Or at least shout to his assistants to bring out the fainting couch, just as a precaution.

*Sorry, but I realized the other day that the phrase “in the land” is only used in sports, and I really think we need to get our mileage out of it before it disappears from the vernacular forever.

Speaking of the men with the clipboards, it dawned on me sometime last year that nobody in American culture is more expressive and melodramatic in the facial area than college basketball coaches. They exhort, complain, disparage, and even beguile their way through games, and it’s the closest thing we have in this country to Kabuki theater. The art is in the look, and last night we were treated to a very special Izzo/Thad Matta dance of ages:

I hope you didn’t watch that whole thing. If you did, leave a rude comment. Here’s a shorter one that cracked me up just for Izzo’s side-eye shade mixed with palpable relief that there was more game to play:

The LoveCraft/HateCraft Parade Rolls On

I don’t know about you all, but I developed a passionate hatred for Craft almost from the first moment I saw his rosy face in his freshman year. His true grit and pluck and gumption offended me, and I was also annoyed that the NCAA gave him a free pass to tackle opponents and win all kinds of defensive awards. Now, in what I believe is his 13th season at Ohio State, I’ve come not only to appreciate him (that happened last year), but to love him. That’s right; I’m a LoveCrafter.

Yes, it’s still annoying when announcers have a mini-gasm any time he hustles, but it has become harder and harder to deny his opportunistic brilliance. Watch, first, this dive to save a possession very late in the game:

Watch again, and notice where he came from. The guy was all the way out on the perimeter! There are very few people in college basketball who would have made that play; annoying as it may be, he’s got that ethereal combination of effort, prescience, and luck that leads to these types of game-changing plays.

(Please note in advance that this next sentence is pure trolling.) And where have we seen that before? Hmm … OH YEAH. Craft is positively Jeterian!

Seriously, has there ever been a more Aaron Craftian play than this?

Plays like this either delight you or make you viscerally angry. I’m in the former category; watching him at the end of games is always an adventure, and I can legitimately say I’ll miss him when he’s gone. Is it crazy to say that Craft is the iconic NCAA basketball figure of of the decade?

Getting Serious: Why Both Teams Should Be Worried

It’s pretty simple; the offenses are inconsistent at best, below-average at worst. Earlier this season, we saw then–no. 1–ranked Michigan State lose to North Carolina at home, and though it has a fluke-y feeling, even in retrospect, the fact is that the Spartans only put up 65 points in a relatively fast-paced game. Things were slower against Ohio State, but when the Buckeyes ratcheted up the tension at the end of the game, Michigan State managed just three points in eight minutes and nearly put up the collapse of the season.

When the Spartans stay within themselves, they’re competent. The problem as it stands now is that Appling and Gary Harris try to “take games over” when the pressure’s on, and while both are strong players with experience, neither one is good enough to manufacture points all by himself. In the final eight minutes, they combined for zero points and six turnovers and moved away from feeding Payne in the post, where he was often able to get deep position and where Ohio State could barely contain him.

For the Buckeyes, the situation may be even worse. It’s a given that a team led by Craft and playing almost exclusively upperclassmen is going to be efficient, and it’s no surprise that it gives up steals at the lowest rate in the country. The problem is that all the efficiency and careful plotting can only be so effective without a few natural scorers. A look at the stats shows a lot of balance, and right now it looks like it might be too much balance. Granted, last night’s game was in a ridiculous environment (I found out just how imposing the Breslin Center was at the Michigan game last season), but even in that context the Buckeyes were poor. Scoring just 38 points in the first 32 minutes won’t cut it, and the 20 that followed in regulation were mostly a result of good defense and Michigan State’s timid play. LaQuinton Ross and Lenzelle Smith Jr. are meant to be the team’s scorers, but their low output yesterday (five and seven points, respectively) is a bad sign for the hard slate of Big Ten road games to come.

Why Ohio State Should Be Thrilled

BUT FORGET ALL THAT. With nothing but experience and talent on the non-scoring end, this Buckeyes team could go down as a historically great defensive team. It’s tops nationally in efficiency, and it’s a radical drop-off to no. 2 — in adjusted efficiency (points allowed per 100 possessions), Ohio State is four points better than second-place Arizona. To get four points lower than that, you have to go all the way down to no. 16. The Buckeyes are in a class by themselves.

How huge is that? The short answer is “really, really huge.” If you gave Division I coaches the choice between having a really great defense and a mediocre offense, or a really great offense and a mediocre defense, I guarantee that all 351 would choose the great defense. Even with the tighter foul calls, college basketball is still a game in which defense trumps offense. Just look at Duke, the team with the best raw offensive efficiency in the country. Without defense, even Jabari Parker won’t save you.

But defense can. Last night, we saw Ohio State clamp down on a pretty good offensive team, on the road, and the results were spectacular. It’s the kind of performance that’s going to make the Buckeyes very tough to beat in a close game, and that quality will obviously translate well to tournament play.

So, Who Really “Won” the Game?

My favorite Ken Pomeroy study is this one, in which he found that in conference games between teams that play each other twice in the same season, the home team has to win by about 13 to 15 points (yeah, it shocked me too) in order to expect to win on the road. We always knew home-court advantage was a huge factor in college basketball, but until I saw those numbers, I never knew exactly how huge. If you look at it that way, a regulation tie is a great result for Ohio State. And again, the way it made a strong offense disappear at the end portends great things in a Big Ten season in which the grinding schedule rewards consistent defense.

As for Michigan State, this is a case when the phrase “a win is a win” doesn’t neatly apply. I’m not saying Izzo’s club will slip out of the top 10 this year — it won’t — and I’m not saying it’s not very good. But the no. 1 ranking that came at the start of the year was pretty clearly the wrong number. Between the UNC game and yesterday’s escape, the profile that’s emerging for the Spartans goes deeper than “strong defense, good offense,” and you can see the problems reflected in Izzo’s unusual frustration with his players. This is a team stocked with talented veterans, and they should be well ahead of the developmental curve. So, then: What’s with the identity crisis?