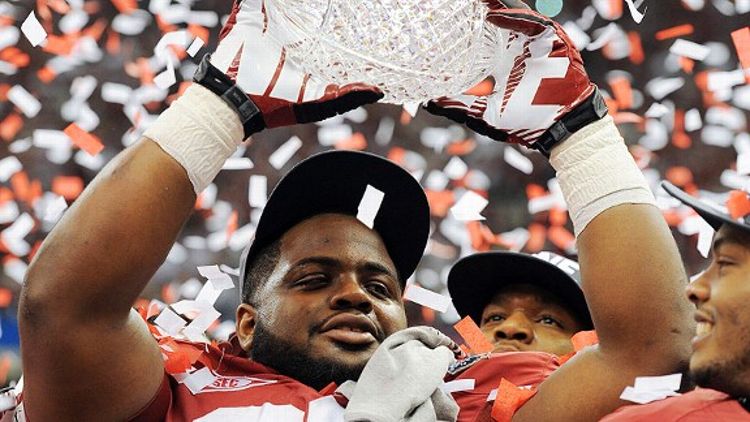 “I will say this: I bet you there’ll be a lot of people wish they’d given us a shot to see a different kind of game. We’d have thrown it 50 times. You like to think Brandon Weeden and Justin Blackmon could have put together some touchdowns. Get the ball thrown down the field and open some things up. Try to make it exciting, and see what happens.” — Oklahoma State coach Mike Gundy

It got so bad that I spent about 15 minutes trying to plot what would happen if the bespectacled marine biologist were a team in the SEC West. Assume he’d lose in, say, six overtimes at Baton Rouge. That would make him the favorite against Auburn and the Mississippis, right? Even playing every position on both sides of the ball simultaneously and not being in shape or having a helmet or pads, he couldn’t produce a worse game plan than Les Miles and Greg Studrawa did Monday night in Alabama’s 21-0 win over LSU. Honestly, I think he’d have a shot at the conference title game if he could squeak out the win over Arkansas.

So yeah, it got bad. Somewhere, on one of those winding forest roads that are always showing up in Michelin commercials, a deer frozen in the headlights of an onrushing Subaru Outback devoted the final second of its short life on earth to the thought: You know what, I’m still running the speed option better than Jordan Jefferson is right now.

And so, as an Oklahoma State fan, I say to you: What in the hell, people? I bring you many earnest what in the hells. That was it? That was the immovable wall of Technicolor fearsome that Oklahoma State and Stanford had no chance of competing against? That was your big reveal? We are now in the position of crowning a national champion that couldn’t convert the extra point after its solitary touchdown of the game. You’re seriously telling me that our poor little old Big 12/Pac-12 selves didn’t deserve a glance at this business?

Alabama’s defense was amazing. Every great college football defense makes me think it’s the best I’ve ever seen, but that one really might be the best I’ve ever seen. LSU’s fanatic determination to keep running plays that had been proven to not work did not, admittedly, make it difficult for the Tide. (Seriously, the image of Jefferson sweeping right on the 537th busted option of the night with his eyes the size of Christmas wreaths and Alabama’s entire linebacker corps bearing down on him will be with me for at least another 27 seconds.) And yes, Justin Blackmon and Brandon Weeden have spent all year drinking hot marrow from the bones of the kind of token coverage Bama threw at the LSU wideouts. Still, credit where it’s due. That was a scary, scary group of student-athletes. LSU didn’t see the sunny side of the midfield line until the fourth quarter. The Tigers ran for 39 yards and passed for 53 on the night. They were 2-of-12 on third down. It’s totally possible that Alabama would overrun the Oklahoma State line, break Andrew Luck down into his component parts, and show the Boise State Broncos a blue so vivid they’d weep when they saw their own uniforms. My point is this: Wouldn’t it be great to find out?

The “we need a playoff” argument in college football has been rehearsed so many times, so patiently, and by so many people that you don’t need me to take you through it again. Here’s the short version: Last night happened. If there’s a reasonable counterargument, the old men of the bowls — you know, the powdered doughnuts in pastel jackets who give off the strong vibe of riding to work on golf carts every morning — have yet to offer it, in my hearing. I enjoy the silliness and chaos of the BCS season as much as anyone, but then, last I checked, March Madness is not lacking for silliness and chaos. The “vaunted history of the bowl tradition” argument seems useful mainly as a test to determine whether someone is a marble statue or not. (Do you care about the vaunted history of the bowl tradition so much that you want to press on with the BCS? Get back to the Louvre, sculpture.)

Now that the season is over, the powers that be will convene, shake hands like upright burghers, and determine what minor tweaks and adjustments will gain them the maximum positive press at the minimum cost to their self-interest. (“I think there will be some change,” Bill Hancock, the executive director of the BCS, recently said. “Now will it be seismic? No one knows.” Me, I have a guess.) Five hundred columns, not unlike this one, will be written about how the BCS’ corporate inertia is wrecking the game for the rest of us. I promise, it will be tedious.

Here’s the thing. For a sports league to work, it has to fulfill two purposes. It has to be fair, and it has to be fun. Most of the time, when we talk about this stuff — especially, for whatever reason, in football — we emphasize fairness over everything. As in: Who cares if the first LSU-Bama game was a grim swamp-trek through mass collective boredom? They’re the two most deserving teams! But isn’t fun why we watch sports in the first place? One of the reasons I thought Oklahoma State should have played in the title game was that it just would have been 5,000 times more awesome as a matchup. Offense vs. defense! Big 12 insurrectionists vs. SEC riot police! Major questions of the season actually answered! We’re never supposed to decide this stuff based on irresponsible considerations like awesomeness. But this is a spectator entertainment, not the Potsdam Conference. Why shouldn’t “In your heart of hearts, which game would you rather watch?” be a relevant question?

Anyway, as things stand, that’s a moot point, because — and here’s the heart of the problem with the BCS — the current system is neither fun nor fair. It coughs up games like Monday night’s, which managed to be painful to watch and also not settle anything. Had the voting gone differently, and Oklahoma State been picked to play LSU, it would have been horribly unfair to Alabama, which clearly deserved to play for the national championship. (I’m basing that on the fact that it just won the national championship.) As things happened, it was horribly unfair to Oklahoma State and Stanford. Right now, the day after the title game, there’s still a legitimate chance that Oregon is the best team in the country. Does anyone even remember Oregon exists?

Again, it’s not new to point out that the system is 16 kinds of wrecked. But it’s worth spending an angry minute mourning the completely delightful slate of games we might now be watching if it weren’t. (You wouldn’t drop everything to watch OSU-Alabama next weekend? Really?) I think my team would have as good a shot at winning the title as any. Instead, Blackmon spent Monday night retweeting people who speculated about what he’d do to the Alabama secondary. The retweets were more exciting than the game.

Mike Gundy said it hurt him to watch. “I just think we could score,” he said. A lot of teams probably felt that way Tuesday morning, amid the ruins of the season and the swarm of alternate realities that the BCS always seems to produce. But a doughnut needs a golf cart, so we’ll never know.