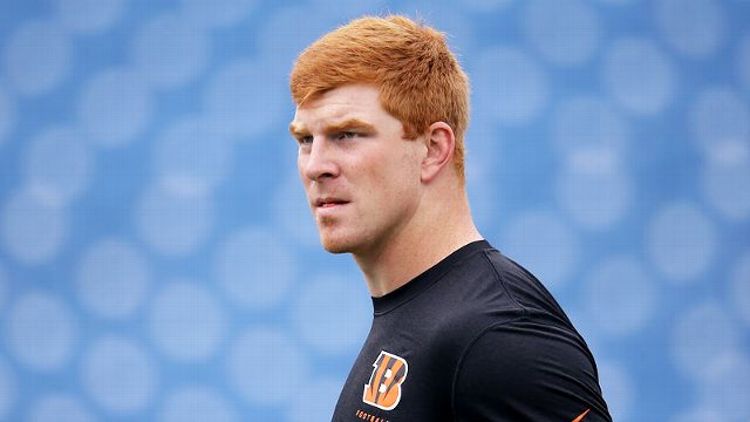 • He fumbles after a Cameron Wake sack early in the second quarter. Wake recovers. (+5)

• The Bengals have the ball on their own 35-yard line with 30 seconds in the first half, and the one thing he can’t do is throw an interception. RESULT? An interception turns into a Miami field goal to the end the half. (+5)

• Between then and the end of the game, Gio Bernard runs like 800 yards back and forth across the field for a 35-yard touchdown.

• And over the course of the second half, the Bengals fight their way back into it just long enough to push things to overtime. Where … the one thing Andy Dalton can’t do … (+20)

He gets points off for 338 passing yards (-6), had another pick thrown in there somewhere (+5), and earned bonuses for four total turnovers (+16) and no touchdowns (+10), so altogether the total comes to a nice round 80. But the game-ending safety should really count for 100 points here. The only silver lining is that it happened on Thursday night. Every Thursday-night game should end in a game-ending safety, just to hammer home the point that everyone should be doing something better with their lives.

Ordinarily Bad QBs are fun, but did you see that Gio Bernard run? Holy shit.

The Bengals have lost Geno Atkins and Leon Hall, but the defense is still pretty great, and AJ Green is not a human being, and Gio Bernard is full of holy-shit plays like that every week, and … remember Hard Knocks?

This Bengals team is awesome, and they’re probably the most credible threat we have to compete with the Patriots and Broncos in January. And the Red Rifle can ruin ALL OF IT.

On any given Sunday, Dalton can make just enough mistakes to turn a contender into a team that should be 6-10. Why do people focus so much energy on quarterbacks? Because a good quarterback can make everyone look better, but a bad quarterback will make everyone else irrelevant. And a quarterback who’s usually OK but sometimes horrible and you never know when it’s gonna go bad? That might just be the most terrifying person of all.

The Red Rifle should scare the shit out of Bengals fans.

1. Matt Ryan. The season of Rembert’s Discontent continues! Do you realize how close Matt Ryan was to the Super Bowl last year and never answering questions about elite-ness again? Ryan was playing with a sprained shoulder and drove the Falcons 70 yards on an eight-minute drive with a chance to win the game, and he got all the way to the 10-yard line — again, playing with a sprained shoulder — and Atlanta just couldn’t get the go-ahead score. End of Super Bowl dreams.

Now the Falcons are old and falling apart, so they’ll have trouble getting back to the title game anytime soon, and Matty Ice is probably going to be stuck with those elite-ness questions for the rest of his career.

Maybe the questions about Matt Ryan are fair, but it’s brutal anyway you cut it. Anyway, the Falcons are officially a bad team now, and Matty Ice was horrible Sunday.

3. Alex Smith. The Chiefs are so horrible. Not because of Sunday — the Bills are actually a sneaky-decent team, especially at home — but just in general. Alex Smith was held to 124 yards passing Sunday, didn’t complete a pass over 25 yards, and just generally continued to be Alex Smith. And the Chiefs are still the Chiefs, no matter how hard their fans try to pretend they belong in the same conversation with the Broncos.

They’re like a college football team that floats to the top of the rankings by default and every week stays in the top five, while everyone else sees them up there and says, “NOPE, not taking you seriously until we absolutely have to.”

4. Angry BQBL Commenters. You guys are the best. Never change.