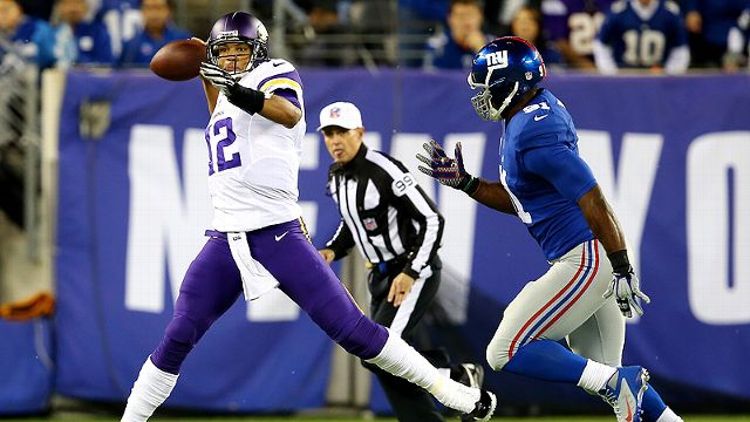 “It was brutal to watch him try to run a professional offense,” Steve Young added.

When the Vikings moved down the field toward the end of the night, Jon Gruden didn’t even sound upset. He was just broken. “These completions and this yardage will inflate the statistics, but we know what happened tonight.”

Like he had just watched four hours of war crimes. Too awful to describe in detail.

We know what happened.

Josh Freeman happened. Somehow the Vikings thought it was a good idea to start a quarterback who’d spent all of 12 days learning their playbook, and that was amazing enough. But then they went out and threw it 53 times, giving us a night of bad quarterbacking that may not be equaled all season. Nobody will touch Matt Schaub’s 108, but Gruden’s right — the numbers don’t really do justice to what went down Monday.

Balls were overthrown so badly that the Giants couldn’t even intercept them. The passes that were on target were thrown way too hard. Minnesota players looked like they wanted to die. Van Pelt was doing sarcastic SportsCenter promos. It was the first game in history where Gruden couldn’t find something positive to say. Ray Lewis looked like he was going to break down in tears talking about Adrian Peterson’s life in Minnesota the past few years. Ray Lewis always looks like he’s about to break down in tears, but still. It was a special night.

Freeman even brought out the rarely seen BOB LEY BURN.

And we thought we had seen the final episode of "Breaking Bad.'

It leaves us with a handful of takeaways:

• Josh Freeman is back in the BQBL, and back with a vengeance, but this is definitely the Vikings’ fault. That’s obvious, right? It’s not a good idea to play a quarterback right off the street and then have him throw the ball 50 times? I feel like this should be obvious.

• But it was incredible to watch. Just a spectacle of awful that kept getting more surreal. Toward the end of the fourth quarter, it looked like Freeman was shaving points. I’ve never seen a quarterback openly shave points, but there’s no way it looks any worse than what Freeman did last night.

• Someone needs to sign Tim Tebow immediately and throw him out on the field six days later. That’s the only way this can be topped.

• We have never seen skill players mutiny as one unit, but MAYBE WE WILL. Like a reverse-Rudy scene. Adrian Peterson and Greg Jennings and Kyle Rudolph all turn in their jerseys until Minnesota gets a real quarterback. If that happens, it’s 500 BQBL points.

• Don’t feel bad for Josh Freeman. Last night was Minnesota’s fault, but still. He’s getting $6 million from the Bucs this year AND $3 million from the Vikings. As Van Pelt said, “Josh Freeman, brought in, 3 million bucks. What, he gets the rest of the year to just figure this out?” Not a bad deal!

• Feel bad for Christian Ponder. Imagine watching that debacle and knowing your team chose that guy over you. He’s making a ton of money just like Freeman, but how does anyone recover after getting bypassed for the Josh Freeman we saw last night?

The best sequence of the night came toward the end, after a Freeman pass sailed eight yards over Cordarrelle Patterson’s and the refs gave him a pity pass interference call.

Mike Tirico: “The Giants … trying to say it was uncatchable …”

Gruden: [Grumbles.] “Uncatchable is an understatement.”

Somebody needs to make T-shirts for Vikings fans who survived. What a night.

We’re skipping the rest of BQBL because it’s been a busy day filled with truth crusades, but special shout-out to Ryan Tannehill for finally embracing the dark side.

See, that’s the Tannehill we’ve been expecting all along. Much better. The world makes sense again with Josh Freeman and Ryan Tannehill back on top. For everyone else, Danny Savitzky has the stats as always. Long live Danny Savitzky.