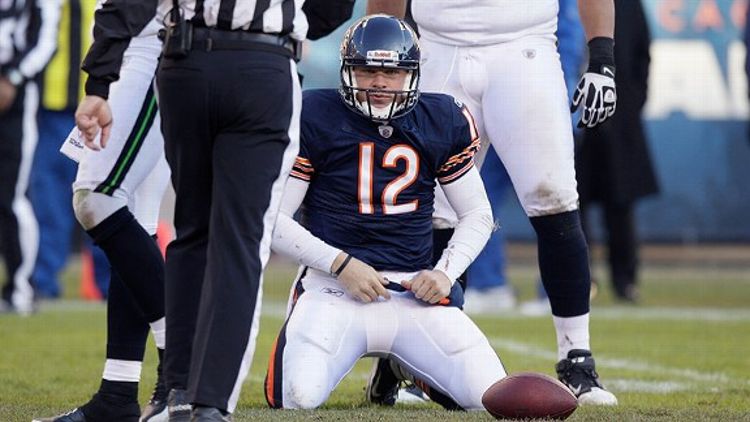 Don’t buy into the hype. Week 15 wasn’t shocking. It wasn’t crazy. It wasn’t weird. It was normal. It is completely modus operandi in the NFL for good teams to lose (Green Bay Packers), bad teams to win (Indianapolis Colts), and the greatest quarterback in the history of the NFL (Joe Webb) to not even get a chance to engineer a miraculous comeback. Do you know what was strange Sunday? The fact that Caleb Hanie started at quarterback in the National Football League. It wasn’t just bad quarterbacking from Hanie, it was performance art, it was interpretive dancing, it was desperation, it was emotion, it was terrible. Hanie’s start against the Seattle Seahawks was like an SNL sketch with the same punch line over and over. The punch line was “interception.”

Chicago Bears (Caleb Hanie, Josh McCown), 128 points: Hey you, yes you, sitting right there in your cubicle. Do you think you are a better quarterback than Caleb Hanie? What was that? No? For the most part, you’re right, you’re not a better quarterback than Caleb Hanie. But for one glorious and atrocious moment of Week 15, you probably could have been. One of Hanie’s interceptions was so heinous, so Hanie-ish that it can only be described by a word that isn’t a word: Haneish. I’ll let you decide which one it was. It won’t be easy, because they were all pretty darn Haneish:

Interception no. 1
When was it?: 10:02 left in the second quarter
What happened?: With the game tied at seven, there was still hope, still enough confidence in the fragile psyche under Hanie’s helmet. He was still genuinely attempting to complete forward passes. To the end zone, no less! This particular one was thrown right into double coverage, tipped into the air, and then intercepted by Earl Thomas. At the time it felt like a bad break; in retrospect, it was one of his best passes of the day.
Was it Haneish?: Trending in a Haneish direction but not quite there … yet.

Interception no. 2
When was it?: 12:20 left in third quarter
What happened?: After running play action to the left and turning to his right, Hanie finds linebacker K.J. Wright angry, large, and inches away from pulverizing him. What he does next is difficult to describe. He takes the most prized possession in the sport, the football, and flings it right into the arms of Seattle defensive end Red Bryant, who then high-steps it into the end zone. There wasn’t even a Chicago Bear receiver within 10 yards of Bryant. After watching the replay two dozen times, I honestly think Hanie just said to himself, “There is a large, frightening man running at me who wants this football. The only way I can stop him from running at me is to throw this football. I will do that then.” Sound logic.
Was it Haneish?: Yes. Very.

Interception no. 3
When was it?: 5:11 left in the fourth quarter
What happened?: I am convinced that somewhere deep in Hanie’s subconscious, he intentionally threw this pick. There was only about five minutes left in the game. He knew he was going to be benched, and when he heard a pass play called into his helmet, he just said, “Screw it, I am throwing this pass to Brandon Browner and watching him run it back for a pick-six. Quarterbacking just isn’t my thing. Good luck, Josh McCown.”
Was it Haneish?: Yes, but there was a subtext of surrender to it — a more depressing brand of Haneish than the other interceptions.

Interception no. 4
When was it? 4:21 left in the fourth quarter
What happened? Josh McCown came in for Hanie. He threw one completion for 12 yards, felt good about himself, and then threw a pick to Richard Sherman. So, to recap: The Bears’ quarterbacks completed 11 passes to their receivers for 123 yards and one touchdown. The Bears’ quarterbacks threw four passes to the Seahawks defenders for 93 yards and two touchdowns.
Was it Haneish? Nope. Only Hanie can be Haneish.

Up next for the Bears: The Packers, on December 25. Merry Christmas, Chicago!

New York Jets (Mark Sanchez, Mark Brunell), 68 points: Mark Sanchez just kept giving the ball to the Philadelphia Eagles. Over and over and over. Let’s have a look at how the first few Jets possessions ended:

At this point, the Jets’ had executed 17 plays from the line of scrimmage and turned the ball over on three of them. I am no NFL offensive guru, but methinks if you turn the ball over 17.6 percent of the times you snap it, something needs to change. Coach Rex Ryan must have felt the same way. Late in the game, he mercifully replaced Sanchez with Mark Brunell, who was just as ineffective but WAY less handsome.

Tennessee Titans (Matt Hasselbeck, Jake Locker), 59 points: December 27, 2004, was not only the day that the Earth survived “the greatest stellar attack ever,” it was also the last day Colts QB Dan Orlovsky was the starting quarterback of a winning football team. Titans QB Matt Hasselbeck did everything he could to bring Orlovsky back to those days. Hasselbeck’s first interception was a solid pick-six, which he followed up with an “I’m just going to loft this thing in our end zone and hope someone in the same uniform as me comes down with it” pick. That would be his last play behind center for the Titans for the day. Jake Locker came in with 6:13 left in the fourth quarter and did what he could. He wasn’t great, but in the two possessions he was in the game, he somehow he managed to outgain Orlovsky in the air by 26 yards. Yep, the winning quarterback in this game threw for 82 more yards than you did on Sunday.

Indianapolis Colts (Dan Orlovsky), 35 points: 82 yards. Eighty-two yards is the distance Dan Orlovsky and his receivers covered via forward pass and how far this dude Roald Bradstock can throw a soccer ball. Roald also has a much better outfit.

Pittsburgh Steelers (Ben Roethlisberger), 32 points: Big Ben really wasn’t himself last night; he had three picks, two fumbles, and one high ankle sprain. I think his ankle was really bothering him, but when he approached Steelers coach Mike Tomlin and tried take himself out of the game, he looked over at Charlie Batch, reconsidered, and said, “I don’t care if I have to throw passes from the back of the cart, that man is not quarterbacking the Pittsburgh Steelers.”

Minnesota Vikings (Christian Ponder, Joe Webb), 27 points: What? The Vikings started Christian Ponder after what Joe Webb did last week? WHAT? The guy runs for 108 yards, brings you back from the brink of defeat, looks like Randall Cunningham reincarnated, and you decide to throw to him more times than you allow him to throw to receivers? This makes less sense than Caleb Hanie starting for the Bears. Actually, no, no it doesn’t. My bad.

New York Giants (Eli Manning), 27 points: Three picks, Eli? Three? Hey Giants, are you the team that beat the Patriots or the team with the same record as the Seahawks? I refuse to accept that the answer is “both.”

Don’t forget, playoffs start next week. You have drafts to do, decisions to make, and stupid arguments to get in. Better hurry.