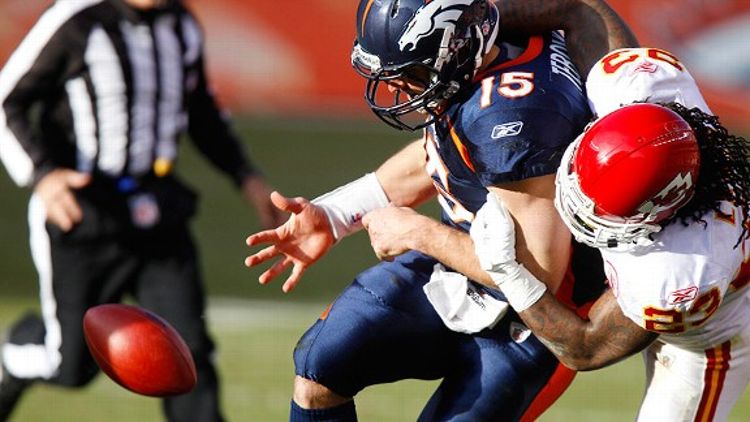 Congratulations if you won your Bad Quarterback League. Guess what? Everyone else didn’t, so stop gloating and start sending e-mails requesting your league fees. Good luck with that.

The rest of us are moving on with our lives, on to things like watching DeMarcus Cousins implode, mourning the death of Darth Vader, and looking forward to one last skewering of Timothy Richard Tebow and the gang on the final BQBL Scorecard before doing our first bit of actual work in 2012. Now about that …

Denver Broncos (Tim Tebow), 80 points: Now that we have some prospective and a full season of samples to look at, I can say with confidence that tracking the performance of National Football League quarterbacks through this fantasy league is stupid. However, it is also hilarious and strangely telling about a quarterback’s true value. There is a reason Aaron Rodgers’ total for the entire season doesn’t come close to one Caleb Hanie game, there is a reason the nickname “Ryan Pickspatrick” became part of the BQBL vocabulary, and there is a reason Tim Tebow was racking up dozens of BQBL points each week. That’s because Timothy Richard Tebow is an atrocious, dreadful, embarrassment of a quarterback, and Denver’s defense won games despite his performance. Either that or he has God on speed dial and is just messing with us. Both are very much in play, but after Week 17, Vegas has “atrocious, dreadful embarrassment of a quarterback” at 2-1.

In Week 17, Tebow was super-Tebowy. Like, 60 total passing yards, a pick, a fumble, and four or five classic “Oh, that one guy is going to tackle me so I will keep spinning around and treading backwards until someone else tackles me” moves. He was so Tebowish that despite his terrible Tebowian efforts, he still was in position to win the game. Teebs had the fourth-and-2 on his own 47 with just enough time left on the clock to Hail Mary his way into the end zone and win the ball game. Before the snap there was a little part of you that said, “If he throws this ball for a touchdown and wins this game, there better be government agents standing by to detain this man and send him to NASA to make sure he isn’t an angel or an alien or aliengel.” Then he threw a pick. I swear, once Chiefs cornerback Brandon Carr came down with the ball, I saw a couple of guys on the sideline with earpieces put Tasers back in their suit jackets.

This week, there weren’t even those usual glimpses of brilliance that inspire hope, faith, and come-from-behind wins. This week, he just sucked. The problem is that the narrative of Tebow makes you doubt your own doubt. There is still a little part of every football fan that says “What if?” What if he puts together a gutsy four-quarter performance and beats the Steelers? What if the home crowd and an enthusiamgasmic quarterback inspires the Broncos defense to take over the game? To that little part of every football fan I say, what if he is an aliengel? We need some DNA samples.

Buffalo Bills (Ryan Pickspatrick), 50 points: “Microcosm” is great word to use if you want to trick people into thinking you are smart and stuff. I use it all the time. Here’s an example — this Bills game was nothing if not a microcosm of the Bills’ season. Let’s have a look at how the first quarter panned out for Pickspatrick and his mates:

Third Possession: Another touchdown (For real. Not kidding.)

Patriots Ensuing Possession: A couple of completed passes (end of the first quarter)

What makes this game a microcosm of the season is because at this point, after one quarter, it looks like the Bills are on their way to victory, can play with the best teams in the AFC, and have one of the best quarterbacks in the league. It also looked great for the Bills a quarter of the way through the season: They were 3-1, beat New England, and Fitzpatrick had only three picks and was averaging 260 yards game. Again, here is where the whole microcosm part comes in. For the Bills, Buffalo fans, and Ryan Pickspatrick, the last three quarters of this game, and this season, were a totally embarrassing, collapse-ish shitshow.

The Bills didn’t score another point Sunday, and Patriots quarterback Tom Brady hung 49 on them in the blink of an eye. Buffalo finished the regular season with a 6-10 record after losing eight of its last nine games. In the last three quarters of this game, Ryan Pickspatrick managed to throw four interceptions, and in the last three quarters of the season he threw 20. Those 20 picks in 12 weeks of football brought Pickspatrick from everyone’s “I told he would be great this year” guy to everyone’s “Look at his beard. I am really worried about his mental health” guy. Seriously though, look at his beard.

Minnesota Vikings (Christian Ponder, Joe Webb), 47 points: Full disclosure: I am a Joe Webb apologist. Webb is just better than Christian Ponder. He is so much more exciting, has so much more big-play potential, and is easily the best quarterback in the NFL — who wasn’t drafted as a quarterback. So when I saw that Ponder went down with an injury, I couldn’t wait to see Webb work his magic. He did not work his magic. Webb’s performance is the perfect opportunity to break out the final appearance of an old BQBL standby, Glass Half-Full Guy and Glass Half-Empty Guy:

Glass Half-Full Guy: Look at this guy’s stats: 17-for-32 for 200 yards. That’s not bad, considering he didn’t practice with the first team all week. Also, consider the alternative: It is his rookie year and all, but haven’t we seen enough Christian Ponder to start to consider the possible ceiling on his career? The best Ponder can hope for is to Jake Delhomme his way from team to team and end up on a team with a killer defense that hides his shortcomings. Joe Webb could be Randall Cunningham, he could be Tom Brady, he could be Tim Tebow, he could be Tim Bradingham, who knows? He has proven he can run, he has proven he can pass, and he has proven he can jump over seven dummy things. Let’s see Christian Ponder jump over seven dummy things.

Glass Half-Empty Guy: There is a reason Joe Webb wasn’t drafted as a quarterback. There is a reason that even after a miraculous comeback and his perfect health, Joe Webb did not start the following week. And there is a reason the Vikings lost this week: Joe Webb. He ran for two yards and had two picks. How about less jumping over tackle dummies and more scoring points?

Glass Half-Full Guy: Ummm … Ahhh … What if he jumped over eight tackle dummies?

Jacksonville Jaguars (Blaine Gabbert), 35 points: Glad you could make it, Blaine. It wouldn’t feel right if you didn’t join us this week. Not going to lie, Blaine, I didn’t watch this one. When I saw that you won, I was excited to check your stats to see if you finished your season on a high note. Let’s see here, 92 yards passing, only 19 total attempts, and a lost fumble? You can really inept your way to a win, huh? Kneeling down and praying is played, turning the ball over and throwing for less than 100 yards in a win is the new “Tebowing.”

Indianapolis Colts (Dan Orlovsky), 29 points: Imagine your spouse spent your entire marriage deciding who to marry next. That is Dan Orlovsky’s relationship with the Colts.