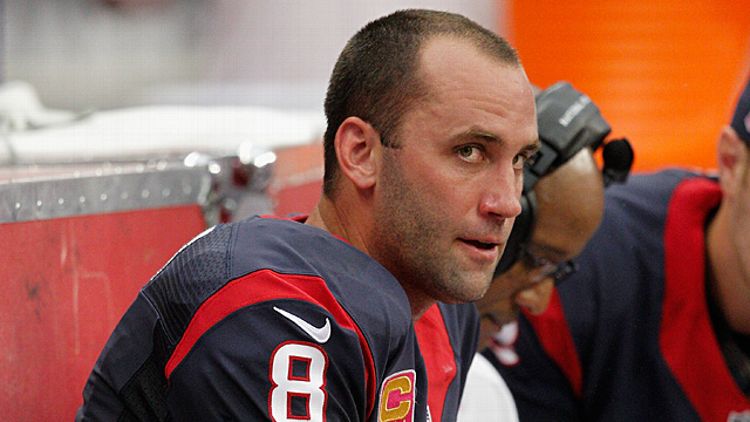 It’s pretty clear now that you cannot win a Super Bowl with Matt Schaub as your quarterback. Schaub just lacks that extra gear that sets him apart from the likes of Brady and Manning. The flip side, of course, is that he lacked the extra gear to inspire any real animus. Or so we thought. ntil proven otherwise, he would softly let you down, not break your heart. Schaub certainly wouldn’t cause the ostensibly sensible and grateful Texans fans to burn his uniform in the Reliant Stadium parking lot. Or confront the man at his home. Or cheer when he left a hopeless game against the Rams with a bum ankle. Oh, by the way, Eagles fans are off the hook now — at least they cheer when the other team’s guys get hurt.

If there really is salvation for Schaub, it’s not going to come in Houston. Not right now, at least, not when Case Keenum is living the broken dreams of Colt Brennan, Timmy Chang, Trevor Vittatoe, Graham Harrell, and every other gunslinging system quarterback by getting the big promotion from the practice squad for the hometown team. Plus, how would you feel if Willie D was going at your ass on Twitter with his best material since “We Can’t Be Stopped”?

In 2013, the NFL appears to be stocked with quarterbacks on the verge of going Steve Blass, Rick Ankiel, or Barry Zito. The problem is that there’s no D-League, no Carolina League, no … whatever you call the NHL’s minors to work out the kinks — go incognito and come back with newfound vigor born of picking on someone not your own size. But perhaps it’s not a furlough they need so much as a homecoming. What if, instead of a trip to the minors, these damaged quarterbacks went back to school? Here’s how our frazzled field generals can give back to their alma maters while getting a little something for their employers at the same time.

Both parties can hardly believe their good fortune here — they’re not on the level of “Iowa running backs,” “Georgia wide receivers,” or “Pittsburgh head coaches,” but since Schaub left Grounds, UVA’s quarterbacks have failed in almost every conceivable way. There was the five-star phenom who couldn’t last a season (Philip Sims), the gutty local guy who was tired of being jerked around (Mike Rocco), the talented ne’er-do-well (Peter Lalich), the academic casualty (Jameel Sewell), and the list will surely go on. And if Virginia’s season continues on course, a trade to Houston would save Mike London the hassle of setting up a LinkedIn account. Prior to his career in head coaching, dude was a no-bullshit Richmond cop who damn near caught an Ironside (Blair Underwood version) on the job, but was spared when a loaded gun pointed at his forehead didn’t go off. Not that I’d doubt Ed Reed would have any trouble handling his biz in a home invasion without a Slomin Shield, but with London patrolling the streets of Houston as a rogue-cop-gone-goon-for-hire, you can bet no one is gonna hassle Randy Bullock next time he botches a kick.

Mizzou would’ve clearly said “thanks but no thanks” last week, but now they control their own destiny (!) in the SEC East (!!), with James Franklin out for the foreseeable future. And surely, while Dorial Green-Beckham is off-limits, the Jaguars probably aren’t looking for on-field talent anyway, especially at wide receiver, as the Jags’ 2013 highlight reel can only be testimonials from satisfied fantasy owners who watched Justin Blackmon and Cecil Shorts tally dozens of garbage-time points. What Jacksonville really needs are some ambitious and wholly uncynical sportswriters who are more than happy to be corporate shills and homers for the dullest team in football, so I see a really easy exchange program with Mizzou’s vaunted journalism school.

There are certain expectations you have for every NFL draft: The Steelers will take advantage of a dubious and precipitous decline in a college star’s draft status and unearth a gem deep in the first round; the Patriots will make brilliant trades for the future and blow their actual draft choices in the present; and the Giants will take the best player available, to the point where it could be taken as a troll move to the rest of the NFL. It’s possible the difficult 2013 seasons suffered by each has been karmic payback, and the Giants are getting retribution for the ultimate dick move: Ryan Nassib was considered by many to be the most NFL-ready quarterback in the draft, regardless of the round in which he came off the board. And the Giants more or less picked the guy just to hold him for ransom. There was no way he’d ever see the field for meaningful PT for the entirety of his rookie contract, short of a catastrophic Eli Manning injury.

And that much has been proven since the Giants are 1-6 and have every single reason in the world to bench Eli Manning, or at least put him in cryogenic storage so he doesn’t suffer a catastrophic injury on a golf course or something. And yet Nassib can’t even get that Kirk Cousins status. Syracuse isn’t that far away from another Pinstripe Bowl with a few late-season W’s, so in exchange for Nassib, the Giants get to play the rest of their scheduled home games in a quarter-full Carrier Dome, because “out of sight, out of mind” is the best policy for the Giants and their fans for the rest of the year.

Oklahoma State could surely use Weeden’s “veteran presence,” just not on the field. Maybe as an elder statesman/role model so the OSU Cowboys don’t end up becoming the other Cowboys. Brandon Weeden as The Substitute or something. Considering the patronage of T. Boone Pickens and the fact that the Browns really don’t give a shit about who actually takes the field these days, this is a straight deal for “cash considerations.”

Consider this: It’s a third of the way through the 2014 season and the Vikings are off to another slow start in a stacked division. A certain halfback-deficient team comes along and offers them a Trent Richardson–like deal for Adrian Peterson, which in turn would give them a very good shot at the no. 1 pick of the 2015 draft, a.k.a. Jameis Winston. There’s no way they turn that down, right? So yeah, you’re not getting any meaningful talent from the Seminoles for Christian Ponder in a straight-up deal. Besides, Ponder doesn’t actually need to play under this plan. The last Florida State quarterback to do right in Minnesota was Brad Johnson, who backed up Charlie Ward, the ancestral Famous Jameis with a killer crossover, during his time in Tallahassee. In exchange, Zygi Wilf receives a signed note from Bobby Bowden saying that the Vikings will totally move to Tallahassee if he doesn’t get his fill of taxpayer money the next time he tries to extort Minneapolis for half a billion. In other words, maybe a third of the way through the 2014 season.

This is actually Roger Goodell stepping in on behalf of the NFL, because let’s face it: Hard Knocks is getting a little played out, and the title seems pretty goddamn insensitive in the face of the League of Denial. So, in conjunction with the USC Film School and the blessing of Trojan diehard Will Ferrell, we finally get a cast that could turn Old School II: Trojan Men into a documentary.