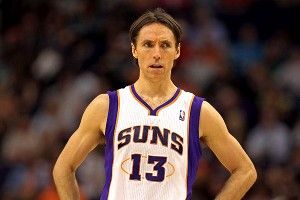 Steve Nash swings by to discuss Phoenix’s improbable playoff run, being in so many trade rumors, the current point guard boon, how the lockout-shortened schedule has affected him, Mike D’Antoni’s legacy (and whether it worked), his favorite Suns team, Dirk’s first title, the time he played pickup hoops in a Scottsdale health club and got his butt kicked, and why Lionel Messi is the greatest athlete on God’s green earth.