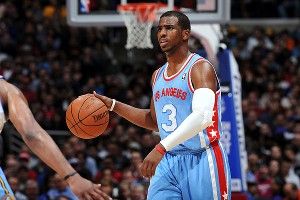 Chris Paul joins Bill Simmons to discuss life in Los Angeles, his first preseason game with the Clippers, and the Lakers-Clippers rivalry. Plus, Dave Cowens reviews his legendary career.

You can find Part 1 on the ESPN.com Podcenter or on iTunes.

In Part 2, Bill and Joe House talk with Robert Horry about his seven rings, getting traded, and how talking builds champions. Also, Hall of Famer Chris Mullin joins Simmons to talk about how the rookie wage scale changed the legacy of today’s young players.

Listen to Part 2 on the ESPN.com Podcenter or on iTunes.

In Part 3, former Suns GM and current TNT NBA analyst Steve Kerr discusses the possibility of becoming a head coach, the pain of losing in the Final Four, and the characteristics of a good shooting gym. Find Part 3 on the ESPN.com Podcenter or on iTunes.

Earlier this week, Simmons and House sat down with Kevin Love and Dirk Nowitzki, who were also in Orlando for All-Star weekend. Listen to Part 1 and Part 2 of Thursday’s podcast on the ESPN.com Podcenter to find out whether Love’s been dunked on by Blake Griffin, how big the NBA Finals MVP trophy is, and learn all about Vinsanity, which is not really a thing.