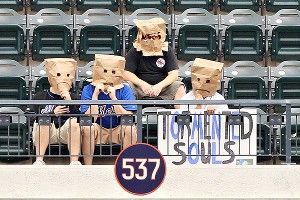 On the occasion of the first Mets no-hitter in history, we decided to run back this piece from Cousin Sal, which was originally published in April.

This past Saturday afternoon the White Sox’s Philip Humber became the 21st major league pitcher to hurl a perfect game when he blanked the Mariners 4-0. While Humber’s feat was a disappointment to Seattle fans, it wasn’t nearly as tormenting as it was to those who have the unfortunate burden of rooting for the New York Mets. You see it’s bad enough that in their 50-year history the Mets have never had a pitcher throw a no-hitter. This one was extra disheartening because in 2004 the Mets drafted Humber with the third pick overall.

To join a group of only 20 other pitchers who have tossed perfect games dating back to the 1880s is quite impressive. I believe, however, that the other day Humber joined a more exclusive gathering. This weekend Humber became the seventh former Met to pitch a no-hitter for another team. He’s in great-to-so-so company, joining Nolan Ryan, Tom Seaver, Mike Scott, Doc Gooden, David Cone, and Hideo Nomo. And that’s if you don’t count A.J. Burnett (drafted by the Mets but never played for them) or Octavio Dotel and Alejandro Pena (who combined with others for no-hitters), which I’m not going to do mainly because that would put the club’s membership at double digits and seven is already a devastating number.

Here are some other New York Mets no-hit wonders that are infuriating enough to make any fan want to join former outfielder Kevin Mitchell on a pet killing spree:

• No surprise to the average baseball fan that after leaving the Mets in 1971 Hall of Famer Nolan Ryan went on to pitch no-hitters with the Angels, Astros, and Rangers. Ryan was sent packing from New York for Jim Fregosi, who hit a whopping five HRs and 32 RBIs in his only season with the Mets. I think I speak for every Mets fan when I say that we’d rather have taken the pummeling Robin Ventura received at the hands of Ryan than be subjected to the constant reminder that he has the record for no-hitters.

• Mets pitchers have collected 35 one-hitters in their half-century existence. The most famous of these was recorded by Tom Seaver in 1969 after pinch-hitting specialist and .223 career batter Jimmy Qualls broke up Tom Terrific’s bid with a one-out single in the ninth. The only saving grace: That year the Mets staged a furious September comeback to overtake Qualls’s Cubs and capture their first World Series title. Also — we landed on the moon or some shit.

• Seaver went on to pitch five one-hitters with the Mets. David Cone had three. Gary Gentry, John Maine, Jon Matlack, Steve Trachsel, and Tom Glavine each had two. Yes, Tom Glavine — undoubtedly still being paid by the Braves — somehow figured out a way to string the Flushing faithful along on two separate occasions.

• Arguably the most obnoxious side stories centers on Dwight Gooden and David Cone, former Mets greats who went on to pitch no-hitters for the cross-town rival Yankees. Unforgivable! Although in Cone’s defense he was never once accused of jerking off in the Yankees‘ bullpen. That honor was bestowed on us and us only.

• The whole thing could’ve been a non-issue just weeks after the team’s inception. In late June 1962 Mets rookie Al Jackson gave up the only hit of the game to career .244 hitter and perennial third base coach Joey Amalfitano of the Colt .45s. As far as malt liquor goes I hear it’s a dynamite taste. Please enjoy this ad for Colt 45. They spent dozens of dollars on it — it’s the least you can do.

• Another heartbreaker came a couple years back when Phillies pitcher Cole Hamels broke up knuckleballer R.A. Dickey’s no-hit bid with a single in the sixth. It proved to be the sole hit of the day. Yes — Cole Hamels — the pitcher. I hereby propose that pitchers at the plate be treated like 6-year-olds during the Fourth of July family Wiffle Ball game. They can take a few swings — but their at-bats do not count toward the official scoring. If the commissioner had any balls he’d apply this rule retroactively — then take it off the books immediately. Go ahead — I dare you, Bud.

• Grantland guru and one of my top 100 Canadian pals of all time Jonah Keri offered these stats courtesy of Bill James’s game score stats. I’m far too dull to fully appreciate the meaning behind the numbers, but it appears as if a couple of Tom Seaver’s one-hitters while with the Mets rank as some of the top pitching performances in baseball’s 125-plus-year history.

Thanks, Jonah … for putting me into a deeper state of depression. You just dropped on my list behind Tom Green and Nickelback.

• The Marlins, who joined the league like three weeks ago, have had four no-hitters. And probably a dozen near no-hitters in the past five years. And who knows how many more they’ll have when manager Ozzie Guillen hires Fidel Castro to give the team motivational speeches next spring.

• The Mets have been generous. There have been seven no-hitters against them over the years. Unfortunately, none occurred during spring training split squad game. I’m grasping at straws here.

• Only the Padres have been as unfortunately futile in the no-hitter category. Although they were founded seven years after the Mets, and in a way I feel worse for them because unlike my team they’ve never won a World Series. On the other hand — compared to the Mets’ big salaries over the years, the Pads’ players have been paid like Taiwanese pig farmers — so it makes sense.

You know what I’m talking about. Not mentioning the possibility of a no-hitter at all for fear that you will somehow jinx it. Not to your friends — not to your loved ones. I’ve been employing this superstition since I was in ill-fitting Shazam Underoos, and guess what … it doesn’t work.

And why should it? Imagine if people acted on such nonsense in life’s other shot-in-the-dark scenarios. What if hundreds of thousands of lottery ticket buyers refused to talk about the possibility of winning? They spend, in some cases, hours waiting in line to purchase the tickets — no mention of winning there. Then go to work where they can’t discuss the dream of hitting the jackpot by the water cooler. Then, at home with their potentially rich dependent. They throw out anyone who mentions what they would do with the winnings into the street for fear that they’d jinx the result. Then — after they lose for the 10,000th time in a row, they start the stupid-stitious process all over again. That’s nothing short of insane behavior, isn’t it? And yet it continues in baseball, where fans have as much control over the outcome of a game as they do a computer spitting out random numbers.

Of the 35 one-hitters in the Mets’ storied half-century history, I’ve probably had the displeasure of watching parts or all of at least 20 of the games. A few years back I was present for one of our closer calls.

Flash back to August 14, 2005, when I took my barely 2-month-old son, Archie, to his first Mets game at Dodger Stadium. We lucked out and got to see a past-his-prime but sometimes very effective Pedro Martinez take the hill. No different from the hundred or so baseball games I had seen live until it became very different. As the innings passed, the Dodgers weren’t hitting the ball out of the infield. And when they were, the balls were caught in mid-air. L.A. was hitless through seven. I remember thinking, but not saying aloud, Is this really happening? Is my infant son going to experience a no-hitter in the first game his blue-soon-to-be-brown-eyes ever witnessed? As it got later in the game I was giddy. Going into the day my main objective was to record Archie staring aimlessly at the JumboTron during the seventh-inning stretch. I remember, because of the different tone the game had taken, not even being able to keep the camera straight.

There were probably 10,000 to 15,000 Mets fans in attendance that day and yet we were all alone. You know why? Because some voodoo-wielding moron who rooted for the Boston Doves in 1910 decided that this is the way it had to be. (I don’t know that for a fact — I just always wanted to mention the Boston Doves in a blog before. Done. Moving on.)

Anyway, it was all for naught as Pedro lost the no-no in the eighth. To add insult to injury, the Mets ended up losing the game 2-1 on a Jayson Werth two-run homer as Archie simultaneously vomited on my Lee Mazzilli jersey. That — I’m OK with not talking about.

A few weeks ago on Easter Sunday my dad and I settled in for a morning viewing of New York Mets baseball. One-by-one Jonathon Niese, sporting a confident gaze to go along with his brand new nose (in arguably his greatest contribution to the Mets organization before being traded, Carlos Beltran convinced Jonathon Niese to get a nose job), mowed down the Braves lineup. Third inning — nothing. Fourth inning — nothing. Fifth inning — more nothing from the Atlanta bats. And nothing from our mouths. Even though the announcers alluded to the potential historic moment and on more than one occasion the SNY director panned the Braves half of the scoreboard, loaded with goose eggs, we were still supposed to pretend nothing was going on. It’s all part of the ludicrous drill. Sixth inning in the books. Now things are getting exciting. Still silent. I’m starting to imagine the N.Y. Post having a field day with this one. “No-Niese Is Good Niese” … “No-No for the New Nose.”

Then the Braves come to bat in the seventh and … it happened. Niese (pitch count now in the high 80s) gets behind and walks the dangerous Dan Uggla. Before Uggla can even get his batting glove off at first, Freddie Freeman pokes a single into right, once again putting me, my dad, and thousands of tortured Mets fans out of our misery.

What could have gone wrong? I know I didn’t mention it. Perhaps my dad snuck off — somehow got the number to the Mets bullpen and called to remind the relievers that one of the most hilarious streaks in sports was going to come to an end? Yeah — that’s gotta be what happened.

Nonsense! Yes, it was Easter Sunday that I decided this superstitious shit has to end. Not discussing a no-hitter for fear that it will jinx the result makes about as much sense as commemorating Jesus’s resurrection by hiding colored plastic eggs with stale jelly beans.

Next month the Mets will have reached 8,000 games without a no-hitter. All I’m saying is this: After almost 50 years of people not talking about it and it not happening, it’s time to try a different tack.

I urge all Mets fans — the next time you get even a whiff of a no-no, make a gigantic deal out of it. And it’s never too early. Dillon Gee gets the first batter of the game to fly out to the warning track — it’s on! Start up the no-hitter talk. Text your friends. Start calling your dog Nolan. If you have access to a sky writer, hire him out to make zeros in the heavens. It’s time to reverse the superstition. It’s our duty as Mets fans and as rational human beings. Let’s pretend that’s not an oxymoron and follow my advice.