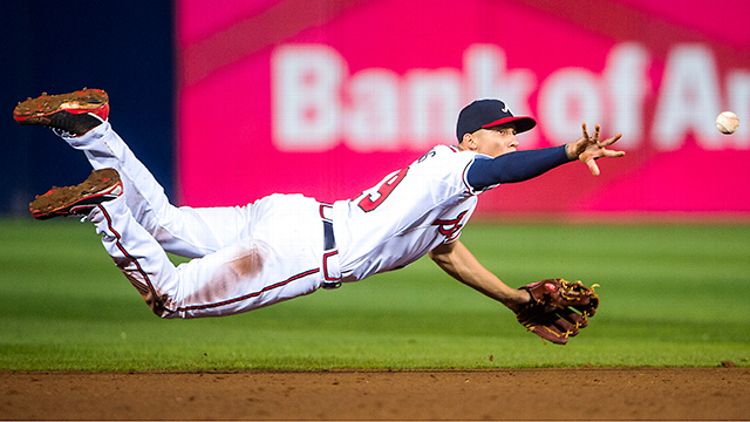 The reason we use statistics, whether in sports or in medicine or in demography, is because they help us to see the whole picture. If I tried to judge, say, the defensive abilities of major league shortstops by using my eyes alone, I’d have a rough go of it. I can’t watch every play of every game. Even if I tried, my perception could be influenced by various factors, including my vantage point, my mood, my potentially faulty memory of what came prior, and my expectations of what might come next.

So when I scroll through this impressive library of Andrelton Simmons GIFs and see something like this:

… I don’t automatically assume that the person who made this play is the best defensive shortstop on the planet. I consult the stats.

The stats, of course, don’t always tell the full story. Questioning advanced defensive metrics has become something like a religious rite for numerically inclined baseball fans and writers, both because acknowledging that numbers don’t capture everything makes one appear measured and reasonable, and because there are legitimate methodological issues at play. For instance, while UZR gives us a better idea of a player’s defensive value than, say, fielding percentage, it’s not precise by any means.

Nevertheless, the stats help construct a frame of reference beyond what our eyes alone can build. So instead of simply looking at those Simmons GIFs, let’s see what the three big baseball stat sites (FanGraphs, Baseball-Reference, and Baseball Prospectus) have to say on the subject of baseball’s best defensive shortstop (stats through September 12):

Defensive Metrics for MLB Shortstops in 2013

The takeaway? It doesn’t matter if you prefer the eye test or the stats test, because pretty much all the evidence points to Simmons being the best defensive shortstop in baseball.

For my money, he’s also the most exciting player in the game.

It’s probably unwise to go around saying things like “Andrelton Simmons is the best defensive shortstop ever,” because he’s only a little more than a year into his MLB career. Plus, we didn’t have UZR and GIFs when, say, Marty Marion was playing. But it’s hard to evaluate or even fully appreciate a player whose actions are so astounding that they’re hard to believe. Any attempt to write critically or descriptively about Simmons’s defense trends inexorably toward the first couple chapters of Philip Roth’s The Great American Novel, which featured ecstatic, alliterative, hyperbolic descriptions of ballplayers whose feats were so astonishing, they had to be fiction.

It’s become common to compare Simmons to Ozzie Smith, and from a certain perspective, that’s pretty fair. Both were great defenders with a below-average offensive game characterized by hardly ever striking out, but hardly ever walking, either. Smith was a better base stealer, but Simmons hits for more power. It’s not a perfect comparison, but it’s certainly not outlandish.

While Smith was an acrobatic defender — literally acrobatic, if you think about his traditional backflip out to his position — who was quick and built like a gymnast, Simmons is long and rangy, built more like the pitcher he was in college than a defensive wizard.

Simmons’s party piece is his arm. Many shortstops have great throwing arms, and “having” a great arm can mean different things — power, accuracy, the ability to throw on the run — in different contexts. When Simmons catches the ball, he transfers and releases quickly enough, but there’s something deliberate about the process. He’ll take the extra moment to set his feet, counting on making up that time with a strong and accurate throw. Jimmy Rollins does this, too.

Except once the ball comes out, Simmons’s throws look nothing like Rollins’s throws. Rollins has a strong arm that’s usually accurate. Watch Simmons field half a dozen grounders, however, and you’ll walk away being only about 80 percent sure that we haven’t invented teleportation. His throws are level, blindingly quick, and almost always on the money. They don’t follow a ballistic arc. Simmons brings the ball behind his ear and whips it around, pausing only for a second in his windup, because you can’t simply shoot a ballista; you have to put the bolt in and wind it up first.

Of course, Simmons has more to offer than a late-inning reliever’s throwing arm. No matter where he gets to the ball, and no matter the condition in which he receives it, it seems like he’s never more than half a second from being in that wide-set, upright stance from which he delivers the most accurate throws of any infielder in the game. For instance:

Simmons goes into the hole for a hard grounder to his right. This is where Derek Jeter eats; if there’s an iconic image of the Yankee captain in the field, it’s of him reaching down to scoop up a grounder just like this one, then leaping and twisting like he’s shooting a fadeaway with his signature jump-throw.

Simmons takes a different route. The problem with the scoop-and-jump is that the shortstop’s momentum is still going away from first base as he releases the ball, forcing him to throw off his back foot. This doesn’t bother Jeter much, because the jump-throw is to him what playing guitar with his teeth was to Jimi Hendrix. Simmons slides into the ball, which might cost him a little in range and delay his ability to get into throwing position, but he digs the back spikes of his right cleat into the lip of the outfield grass (you can see the puff of dirt this kicks up), which arrests his momentum completely.

Why doesn’t Jeter do this? Because of what comes next: Simmons goes from the splits to upright in about half a second. It’d take me 20 minutes and half a dozen paramedics to get up from that position, and Simmons does it in time to throw out Lorenzo Cain by three or four steps. That’s not normal for a baseball player; that’s a break-dancer’s move. And look at the throw. It’s level and on target, but it’s all from the shoulder and the wrist. Simmons gets to the ball, does a split, stands up, and just kind of flips the ball over to first. On a clothesline. Like it’s nothing.

Some defenders are great showmen, flinging their bodies around with incredible effort, flashing the leather in the most faithful sense of the word. Simmons just does things. He’s not merely a great defender; he’s so good that we marvel at the things that to him are so routine, so reflexive, they almost seem beneath his contempt.

So far this season, Simmons has shaken my faith to its core. He’s made me reevaluate my trust in physics. He’s expanded my imagination. Watch him for a couple of innings, and he’ll expand yours, too.