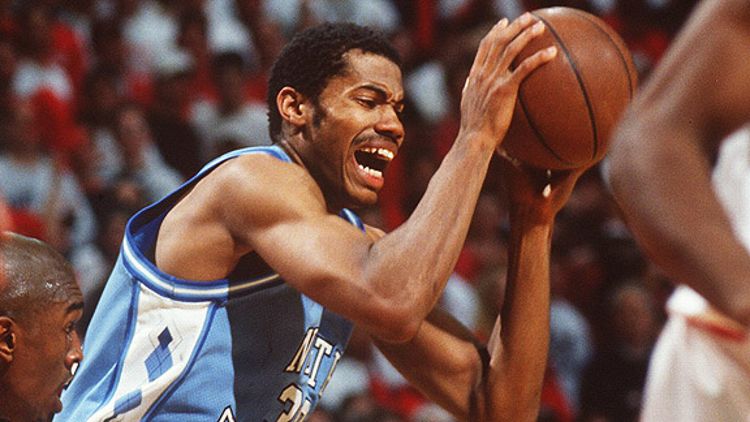 “When Rasheed walks in,” said Erroll Reese, an organizer of the Greater North Carolina Pro-Am, “everyone’s all like, ‘Sheeeeeeeeeeed.’ You’ll see.”

He was referring to Rasheed Wallace, a regular on the campus of North Carolina Central University, where we were standing … and sweating. It was a Wednesday night at the NC Pro-Am, an event that has become such a summer staple that when I mentioned it to five locals, not expecting them to know a basketball tournament from a golf scramble, they not only wished me luck getting in, but also asked which players were in town. One was Wallace, the crowd favorite, who owed his popularity not to his 15 years as a professional, but to the two years he spent at nearby UNC. This became clear as Wallace parked his silver Mercedes outside the building and took two steps toward the McLendon-McDougald Gymnasium. That’s when he was spotted by Bill Murphy, the league’s announcer, who sounds like an arcade game from the ’90s.

In a baritone chorus, the crowd responded: Sheeeeeeeeeeed!

Wallace walked in rapping. He was wearing earbuds, shower shoes, white socks, gray sweatpants sheared at the ankle, and a matching long-sleeved shirt. It was 90 degrees outside and not much cooler indoors. His team was scheduled to play at 9 p.m. — Reese called it the West Coast game — and Wallace killed a half hour by shouting at the players on the court for the 8 p.m. contest, his eyes widening and his cheeks surging upward in a way that was simultaneously playful and terrifying.

As he was lacing up his Nikes, bright red high-tops with the number 30 on the heel, Wallace called for the attention of Tar Heels legend Phil Ford, who was dressed in a white polo shirt and blue golf shorts with glasses resting on his forehead.

“Yo, I might fucking play for real tonight,” Wallace said.

Ford was reclining in a metal chair at the scorer’s table when he saw Wallace slipping into the Pro-Am’s uniform, a form-fitting tank top that scrunched around his lower back and accentuated the size of his formidable rump. He asked if it was too tight. “Fit my fat ass!” Wallace said as he patted his paunch. And then, after a swig at the water cooler, Wallace moseyed onto the court and hustled harder than anyone all night. He yelled out defenses from his spot underneath the basket. He lunged after a loose ball in the corner. He engaged the referees in a never-ending cacophony of complaints. When he actually earned a favorable call, he informed the official that this one had been a “weak-ass” foul that he didn’t deserve.

Around the time Wallace was loping back to his huddle, hollering “Get a timeout!” at the other coach, I realized why it didn’t seem all that extraordinary that he had been talking to himself and whining about three-second violations.

It was because he was playing like he was still in college.

This would explain Wallace’s célébrité at the NC Pro-Am, which was founded in the summer of 2008 and has since gone by the nickname “Rucker of the South.” That year, the organizers all but begged people to swing by the free event with enough talent to beat the Charlotte Bobcats — or, better yet, win the Atlantic Coast Conference. But in August, by the time basketball junkies had discovered the Pro-Am, the league’s commissioner, Donyell Bryant, noticed something startling: Attendance figures were plunging. How could this be? The answer was simple. College players were leaving for the last stretch of summer break.

“We thought the draw was NBA guys. We found out very quickly that the biggest bang for the buck was college players,” Reese said. “It shocked us.”

Three years later, the Pro-Am claims as alumni almost 20 NBA players, the past two no. 1 picks in the NBA draft, key members from two of the past three NCAA champions, and basically every college icon in the past five years with any connection to the state of North Carolina. In 2009, when a spindly teenager from Raleigh named John Wall dunked on Jerry Stackhouse, the league’s celebrity host, blotches of empty seats dotted the stadium’s lower level. But come 2010, about 1,000 people were turned away at the door for an ACC preview between UNC and NC State. It was such a spectacle that one of the absent Tar Heels, Leslie McDonald, immediately got an earful from Harrison Barnes about missing the run. “I regretted it,” McDonald said.

Even that night couldn’t have prepared the Pro-Am for the consistent sellouts of this season. “It’s been off the charts,” Reese said. Most nights, a line for admission snakes down a sidewalk, and sometimes the concession stand sells out of $4 Chick-fil-A sandwiches. The gym’s 3,056 seats are stuffed so quickly that Murphy often drowns out the soundtrack of Kanye West singles to scold visitors for cramming in aisles and clogging the exits.

Spectators come to watch the players with local roots. The largest crowd of the summer saw Julius Hodge, the NC State legend, engage Wall in a prolonged matchup, mano a mano, that ended when the Wizards guard drew a foul and broke a tie with 0.9 seconds left. Raleigh’s newspaper, the News & Observer, described Hodge’s defense like this: “At various times Hodge slapped the floor, pounded his chest, flapped his arms, flexed his muscles and put his hands behind his back while guarding Wall.” In one game, after he threw down three ferocious dunks, Austin Rivers pulled off a crossover-stepback sashay that doesn’t make any more sense in slow motion than it did live. Not long afterward, UNC’s P.J. Hairston was spotted icing his wrist at the Pro-Am. He had bruised it, he said, by “dunking too hard.”

Indeed, if there were ever a time for the NC Pro-Am, this is it. The spring after the first Pro-Am, which extends from June to August, UNC won the NCAA tournament. The next year was Duke’s turn to bring the national championship to the region. Two months later, Wall went no. 1 in the draft, while this year’s schedule kicked off a week after the Cavaliers selected Kyrie Irving with the draft’s top pick. UNC opens with 3-to-1 odds to win the 2012 NCAA tournament with Barnes, John Henson, and Kendall Marshall, all of whom have played in the Pro-Am, plus Hairston and James Michael McAdoo, freshmen who left Tar Heel fans salivating with their stints. As many as six Pro-Am alumni could be lottery picks next June, when Barnes or Rivers might be the Pro-Am’s third straight no. 1 pick.

“It’s like no other Pro-Am I’ve seen in a while,” Jay Williams told me the morning after he had strutted into the gym as a spectator in big sunglasses. Williams was familiar with pro-ams like this. Last August, he earned the nickname “The Bourne Supremacy” in New York City’s famed Dyckman League. But even last week, when he brought Brandon Jennings with him, he refused to take the court until he had ample time to practice. “I’m gonna get in the gym and get up shots before I come out here and jeopardize my reputation,” he said.

A guard like Williams would stand out during the 20-minute halves of running clock, since the Pro-Am combines the flash of an AND1 tour and, at times, the zeal of a Duke-UNC showdown. (An NCAA rule that prohibits more than two guys returning to the same school from playing for the same summer team means that Blue Devils and Tar Heels have actually joined forces at the Pro-Am.) He might catch the attention of the seated announcer, Murphy, a raspy Princeton graduate fond of staccato roars like, “One-handed power slam!” and “You’ve got to bring your grown-man game here at the Greater North Carolina Pro-Am.”

Earlier this summer, when Rivers slithered through an opening at the top of the key and assaulted the rim, Murphy highlighted the moment with this impromptu exclamation: “Bang! Austin Rivers has announced his presence with authority!” When I asked him recently about that night, he stopped to set down his iced tea. “The level of intensity got so high so fast,” he said. “It was really shocking.” This sounded a lot better when he said it. The same was true later that evening, when a guard named Marcus Fisher picked up a technical foul for arguing with a referee in shorts. “Marcus,” he said, pausing for the punch line, “you are not Rasheed Wallace.”

In that game not long ago, with Wallace scooting around like a sophomore benchwarmer, even the referees were baffled by his behavior. That was Wallace’s opinion, at least. “Who makes up the rules? That’s garbage,” Wallace said during a free throw, as he sauntered over to the scorer’s table. “Three seconds? That’s college. They don’t know if we’re playing college or NBA —”

“Yo, I got it,” he said. Then he turned back to the scorer’s table to continue chatting.

When the evening finally ended, before the last spectators cleared out of the gym, Wallace posed for pictures and signed UNC gear. “You killin’ ’em with that outfit, cuz,” he told a boy in a yellow polo. He was walking down the first-floor corridor, from the gym to the exit, when someone barked a question at his back.

Wallace looked over his shoulder, unfurled a wide smile, and stepped outside into the sticky night. There were many other places that might have rolled out a red carpet for him: skills camps sponsored by shoe companies, private gyms rented by agents, charity scrimmages with exorbitant entry fees, nightclubs hosting events. But even after Wallace left, he wasn’t gone for long. In fact, he returned the very next night.