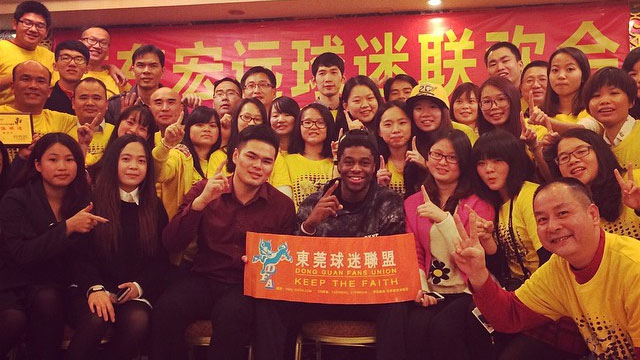 Ever since Emmanuel Mudiay made his pro debut in November, he’s been in the presence of ghosts. Whether his decision to play for the Guangdong Southern Tigers was for the immediate betterment of his family, to avoid NCAA policing of his college eligibility, or both, it’s a decision with a fraught past. His story will forever be linked to the cautionary tales of Brandon Jennings’s struggle as a 19-year-old playing professional ball in Italy, or Jeremy Tyler’s travails in Israel and Japan after skipping his senior year of high school. Mudiay would either repudiate this chain of “failures,” or he’d fall right into place as the third link.

There were ghosts waiting for him on the other side of the world, too. His starting mate, Yi Jianlian, I’m sure you’re familiar with; the sixth overall pick in the 2007 draft was a bust most known for dominating a chair in workouts. On the Tigers bench is Chen Jianghua, a former Chinese basketball prodigy who, back in the mid-aughts, was the closest China had ever gotten to producing an NBA talent at point guard. Chen had New York Times and ESPN features written about him by the time he was 16. He’s 25 now; his hype is tied to an anchor deep in the South China Sea.

Mudiay’s first season of professional basketball is over. His Guangdong Tigers, the most successful team in CBA history, lost their semifinal matchup Tuesday against Stephon Marbury’s Beijing Ducks, 3-1 in a best-of-five series. Twelve games and $1.2 million later, have we learned anything about Mudiay that we didn’t already know? Was this a failed experiment? The answer, as it always does, depends on your perspective.

But before we get into the good and bad, here’s an inexorable truth: Down 2-0 in the series, with a chance to advance to the championship round hanging in the balance, the Tigers called upon an 18-year-old to help save them, three months since his last game after suffering an ankle injury in late November. That just isn’t something professional basketball teams do. He had put on a few pounds. He looked visibly tired at certain points. All he did in his first game back was score 17 points in the first half and finish with 24 points, eight rebounds, four assists, and two steals.1 That’s the kind of talent Mudiay is. Game 4, and the season as a whole, might not have gone the way Mudiay wanted, but he did more than enough in his final two games to maintain his status as a top-five player in the upcoming NBA draft.

Mudiay, standing 6-foot-5 with a solid 200-pound frame, is easily categorizable. He falls under the tree of John Wall and Tyreke Evans, guards who take full advantage of their physical superiority on the court. He’s impressively strong, and while his powerful first step is usually enough to get him to the line, he’s shown the ability to fight for extra possessions on his misses. Nearly a third of his total rebounds this season were offensive. During one sequence in Game 3, Mudiay blew layups on consecutive possessions, but in both instances, he fought for the ball with incredibly quick second and third jumps. Both plays led to and-1 opportunities.

Mudiay is a physical marvel, but he is raw and will look especially so in the coming months in comparison to Ohio State’s D’Angelo Russell. You want to forgive him for the fundamentals he lacks, but sometimes their absence is painfully obvious. In the first quarter of Game 3, he air-balled a free throw, because the shot is all arm — he does not bend his knees at all at the line. Mudiay winced in embarrassment and repeated his follow-through motion, as if that were the problem in the first place.

Mudiay shot an atrocious 57 percent from the free throw line in China. He’s a shooter by feel, and it shows. His midrange game pops when he’s given the space to string together hesitation dribbles; he’ll surprise you with his 3-ball when he’s in rhythm (34.2 percent). As is the case for most big guards who have lived with a physical advantage for most of their basketball lives, shooting is Mudiay’s biggest concern, and he’ll need to spend the next few months back in the States proving that his shot isn’t broken.

What Mudiay lacks in fundamentals, he makes up for with an innate sense of pace and timing that shouldn’t come so naturally for a player so raw. While he’s prone to mistakes, Mudiay has shown the ability to take advantage of changes in speed, something that took guys like Wall and Russell Westbrook years to accept. Maybe the most comforting play Mudiay made in Game 3 happened early in the fourth quarter. Near center court, Mudiay called for both of his bigs to come to the top of the 3-point line into a basic “horns” formation, for a double drag screen play. Mudiay dribbled right, Yi dove down into the paint with a defender on him, and Mudiay was instantly doubled. Zhou Peng, who set Mudiay’s screen, slipped left and had a wide-open driving lane. Mudiay found him immediately for a score and a foul. As far as style goes, Mudiay has all the tricks — the behind-the-back drives, the jackknifing reverse layups, the breakaway slams — but this was a taste of good, slow cooking.

The what-if scenario of Mudiay arriving at Southern Methodist last fall won’t go away. It surely would’ve made the debate between him and Russell much easier to judge. But overall, the Emmanuel Mudiay experiment in China was a mild success — a miracle given the circumstances. If you’re adamant that college is the only place for these young athletes to develop, his small success overseas won’t sway you. He is still very much a question mark. But he’s on his way back to the States now, in dire need of a haircut. He’ll be gearing up for draft preparation, ahead of the curve.

https://instagram.com/p/yzinb5v-WK/?modal=true
Mudiay’s immediate stock may fall in the eyes of casual fans — after all, his season has ended just as the drama of college basketball is peaking. He may have played only 12 games,2 but he was with Guangdong for all 46 of its games, spending time with the training staff, scouting opponents, and bonding with teammates on road trips that can take days at a time because of China’s transportation systems. Mudiay has referred to Tigers captain Zhu Fangyu as his “Chinese brother.” He turns 19 this week, and he is a professional. He is a kid who survived a transformative learning experience. He made a million dollars and signed a shoe deal. He had 4,000 people, strangers of a once-alien culture, chanting his name to the beat of a drum at Dongguan Stadium. How’s all that for intangibles?