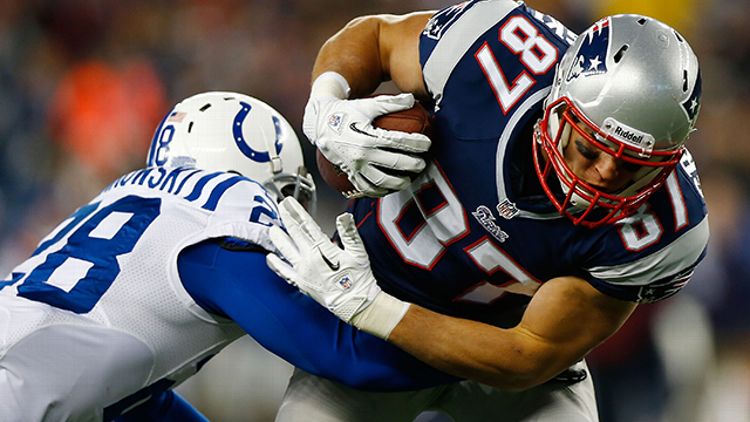 Has Gronk gronked his final gronk? Tuesday’s news that Rob Gronkowski will undergo back surgery continued a disastrous eight-month run that has seen him already go under the knife four times for the forearm injury he first suffered in Week 11 and a subsequent infection. The forearm issues (and the high ankle sprain that hobbled Gronkowski during 2011’s Super Bowl loss to the Giants) are one thing, but this back injury has the potential to be far more devastating.

This is a shoe that’s been waiting to drop — or the back that’s been waiting to drop, I guess — since Gronkowski started his professional career. After a promising sophomore season at the University of Arizona, Gronkowski missed his entire junior year with a back injury. As I documented in this article on the health of tight ends (notably Gronkowski) before last season, that injury started as a “strained back” that had Gronkowski day-to-day, before becoming a season-ending injury in late September. Gronkowski then underwent a microdiscectomy to shave a disc that was bothering his sciatic nerve. (This injury is reportedly to a different disc.) Rumors that Gronkowski suffered from spinal stenosis, the narrowing of the spinal column that ended Michael Irvin’s career, were denied before the 2010 draft. After rehabbing, Gronkowski then decided to turn pro without reestablishing himself in school, a move that screams, “I need to get paid while my back still allows me to do so.” OK, maybe not in Gronk’s voice.

The initial reports suggest that Gronkowski will miss the beginning of New England’s training camp in July, but any reports about a firm timetable for his return can be safely ignored. Back surgeries vary in rehab and recovery times more than just about any other surgery NFL players undergo regularly. Furthermore, there are few public details out yet about the specifics of this new back complaint. The Patriots are typically vague with the details of injuries, but they might not even know what’s up with Gronkowski. When asked about the injury last week, Patriots owner Robert Kraft said, “I wish I knew as much as you’d like me to know.” It’s entirely possible that the extent of these injury problems could only become clear once Gronkowski’s on the operating table.

What seems distressing is the timeline for this back injury. It wasn’t an injury suffered from a traumatic hit or produced by the immediate wear-and-tear of an NFL season. (Here’s where some enterprising sports talk guy in New England blames the injury on Gronkowski bending over to guard the edge on extra points.) This appears to have popped up as a problem during these past seven months, a stretch in which Gronkowski has played 31 snaps of football. A period where — at least theoretically — Gronkowski’s back should be feeling better, not worse.

The injuries also bring Gronkowski’s contract extension back into focus. When Gronkowski signed the deal 11 months ago, he was coming off of the greatest sophomore season by a tight end in league history, but his deal put him in a neighborhood with the likes of Marcedes Lewis. Essentially, it locked Gronkowski into a below-market (but guaranteed) four-year, $18 million deal while giving New England the option to take up a four-year, $37 million deal immediately afterward. Why would a phenom take such a below-market deal? Gronkowski either needed money fast (and as a dude who spent nearly as much time in Vegas last year as Gronk did, I can understand that) or was concerned that his body might not hold up long enough to get a market-value deal at the end of his rookie contract. Gronkowski’s logic made sense at the time, but it looks even better less than one year later. Expect other teams to start pointing to the Gronkowski situation and the team-friendly contract extension he signed when negotiating with young players with injury histories in the near future.

It’s entirely possible this could just end up being a minor surgery and that the Gronk we all know and love could be rumbling over safeties into the end zone as early as September. It’s also entirely possible that we could also have already seen the best football of Gronkowski’s career. That seems impossible for a player so young, but consider the career path of the recently retired Shawne Merriman. Like Gronkowski, Merriman had a promising rookie season before breaking out in his second campaign, a season in which he led the league with 17 sacks despite only playing 12 games. After a third impressive season, Merriman’s knee started to flare up, and he was never the same player again. He underwent season-ending surgery after trying to play once in the 2008 season and never got healthy again. Merriman had 39.5 sacks in 42 games over three seasons by the time he turned 24. Gronkowski has 39 touchdowns in 43 games over three seasons by the time he turned 24. Merriman only had 33 games and six sacks left in him after those three remarkable seasons. Let’s hope that Gronkowski comes out of his injury-riddled stretch with a healthier career ahead of him.