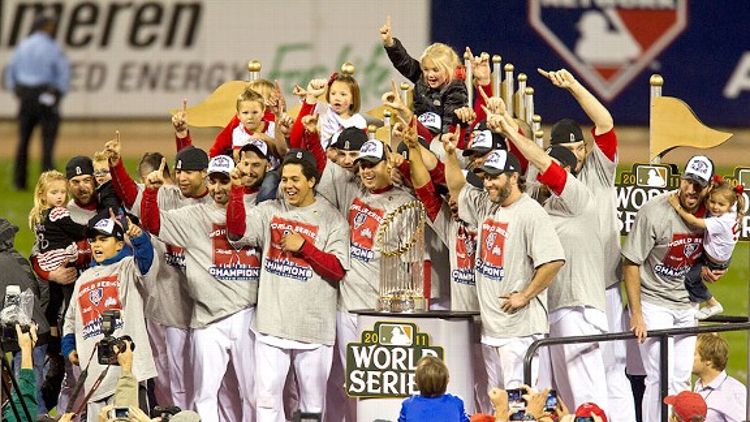 Are the St. Louis Cardinals the most unlikely champions in baseball history?

They are the champions, let’s start there. In toppling the Rangers 6-2 in Game 7, the Cardinals provided a fairly anticlimactic end to a riveting series, especially after a Game 6 best described as “How Did This Happen?”

The two biggest surprise players of the Cardinals’ postseason also paced the team’s offense in Game 7. After the Rangers grabbed an early 2-0 lead, David Freese stepped to the plate with two on and two outs in the bottom of the first. His ringing double to left-center cashed Albert Pujols and Lance Berkman, and left Freese a single short of the Hero’s Cycle, following his game-tying triple in the ninth and game-winning homer in the 11th inning of Game 6.

Allen Craig gave the Cards the lead they would never relinquish, blasting a solo homer to right in the third to make it 3-2. Then in the sixth, Nelson Cruz lofted a fly ball deep to left, sending Craig back to the track, then to the wall. Craig leapt, reached over the fence … and made a fantastic catch, the first home run-saving grab in the playoffs since Endy Chavez’s beauty in Game 7 of the 2006 NLCS. Craig had started the series with two enormous, go-ahead pinch-hit singles (one of them an eventual game-winner), then a home run in his first series at-bat as a starter in Game 3, prompting predictions that Craig could end up series MVP if the Cards prevailed. In the end, Freese (.348/.464/.696) took home the hardware and the new Corvette, beating out Craig (.263/.417/.767), Lance Berkman (.423/.516/.577), and Game 7 pitching hero Chris Carpenter.

When not continuing his run at playoff swearing records, Carpenter came up big, plowing through six innings and 91 pitches on just three days’ rest. His night seemed destined to end much quicker in the first, as the first four Texas batters all reached base, scoring two runs. Thing is, it should have been four but for more blown Rangers opportunities. As strong a postseason as Ian Kinsler enjoyed, his baserunning flights of fancy hurt his team, capped by his first-inning pickoff last night — the fourth time he was caught stealing in the playoffs, the third-highest playoff total ever. The Rangers threatened again in the second, loading the bases with two outs for Elvis Andrus. But the Texas shortstop went down quietly, tapping back to the mound and stranding three more runners.

No one knew it at the time, but that was it for the Rangers’ season. They managed just one more hit off Carpenter over the next four innings, and just one base runner over the final three innings against the Cardinals’ bullpen. There were a few flashpoint moments, including Ron Washington deploying Elvis Andrus to piss away an out, in the fifth, with the Rangers down a run, a move so ill-advised even Dale Murphy ranted about it. Then there was the disastrous bottom of the fifth, which saw the Cards tack on two more runs despite never hitting the ball out of the infield, thanks to three walks and two batters hit by pitches. Funny thing, though: No runs score if home plate umpire Jerry Layne makes the correct call and punches out Yadier Molina on a 3-2 pitch that hit the strike zone but was ruled ball four. Can’t have the final game of the season go by without one last, blatantly obvious error by an umpire, which could have been remedied with expanded use of technology.

Still, all that amounts to small beer, with the Cardinals outplaying the Rangers in every facet, and earning a well-deserved championship. Which brings us back to the original question: Was this the most unlikely championship of all time?

Let’s eliminate a couple of teams right off the bat. The 2006 Cardinals won only 83 games and the 1987 Twins won just 85 games, yet both those teams went on to win the World Series. Still, they didn’t face the kind of monumental challenges that some other clubs had in getting to the playoffs. You might argue that one of these two teams was the worst ever to win the World Series. But worst is not the same thing as most unlikely.

As fellow Grantlandtonian Rany Jazayerli noted, two of the teams with the best claims to “most unlikely champions” status were the 1914 Braves and the 1969 Mets, who gained their nicknames from the paths they had to take just to keep playing into October. The Braves started that season by going 12-28. By July 4, they were 15 games out of first. But they pulled into a tie for first place by late August, and they surged from there. Meanwhile, the ’69 Mets sat 10 games out of first on August 13. Much more than that, they’d never before even managed a winning season, having won just 40 games in their 1962 expansion year and improved mostly incrementally since then. Then came the finishing kick, with the Mets going an incredible 38-11 to close out the season, reach 100 wins, and ultimately win the big one. Forever after, those two teams were known as the Miracle Braves and the Miracle Mets.

But two teams had more ground to make up in September than either of those two miraculous clubs: the 2011 Cardinals … and the 1964 Cardinals. Fans and historians might think of ’64 as the year the Gene Mauch-led Phillies collapsed more than as any achievement of the Cardinals’ doing, and indeed, Philly’s tailspin to end that season was brutal. But the Cards still won 16 of their final 21 regular-season games that year. In so doing, they came back from an 8.5-game deficit, the biggest September comeback in baseball history to that point.

This year, two clubs either matched or topped that record: the Rays, who stormed back from a nine-game Red Sox wild-card lead that triggered a baseball Armageddon in Boston, and the Cardinals, who wiped out an 8.5-game Braves lead to snag the wild card themselves — both teams sealing the deal on the very last day of the season.

It’s what happened next that clinches the argument. This year’s Cards had to battle through three playoff rounds to win it all, compared to just one for the ’64 team (two for the ’69 Mets, one for the ’14 Braves). They started the postseason without the services of Matt Holliday, one of their best players and one of the top sluggers in the league. They went up against the heavily favored Phillies and one of the best playoff rotations we’ve ever seen, forced them to a deciding Game 5, then watched as Carpenter outdueled the man who might be the planet’s best pitcher, Roy Halladay, to win it. The Cards then took down the Brewers in six, defeating the team with the NL’s second-best record. The knockout blow was Game 6, with the Cards coming down to their final strike, then coming back, twice, before winning on a walk-off home run by a hometown kid who had just 15 big-league homers before winning back-to-back MVP awards in the LCS and World Series. To put it in perspective, the only other team to be one strike away from elimination and win it all was the 1986 Mets.

Next year could look very different for the Cardinals if Albert Pujols, the team’s best player since Stan Musial, skips town. The Rangers, armed with a deep roster, a still-strong farm system, money to spend, and C.J. Wilson looming as their only significant potential offseason loss, could very well make it back to the World Series for the third straight season.

That will be then. For now, we have a new world champion. All things considered, it’s the one we should have least expected, in the history of the game.