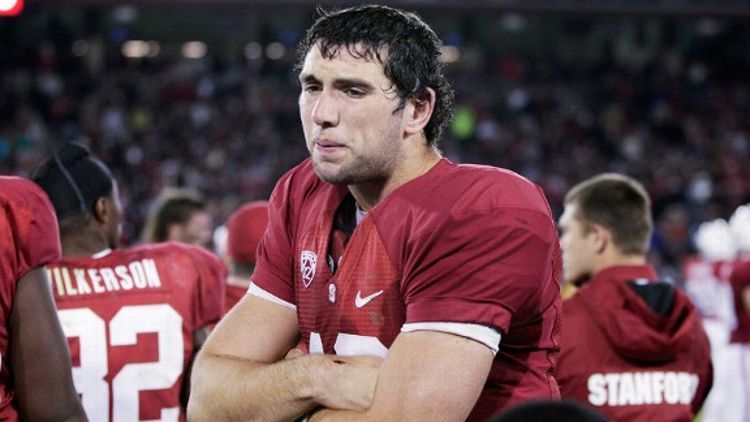 Before we get started, here are two criteria that should never determine the winner of the Heisman Trophy:

Prior to last Saturday’s loss against Oregon, Andrew Luck was at the top of many lists. And while his backers didn’t quite come out and list the above reasons, theirs were equally muddled. “Decision-making.” “Arm strength.” “Poise.” “Leadership.” Luck, we were told, could lead an offense better than any quarterback in America. Even after the loss, the predominant discourse is about the race “tightening up,” as though he had a huge lead that might be slightly smaller now.

There are two factors that should determine the winner of the Heisman Trophy.

Both of these, I admit, are problematic. Let’s start with winning. The Heisman is an individual award, and winning is a team game. The biggest victim here is Baylor’s Robert Griffin III, a wonderful quarterback who can’t help the fact that his defense is woefully unsuited to deal with the Big 12. Baylor has lost three games because the defense gave up 36, 55, and 59 points, respectively. There’s not much Griffin could do about that. He played well in those losses, and he’s been downright heroic in games when his defense gave him a chance. However, if you want to look at the Heisman as a judgment on which player leads his team to elite status, it’s not completely unfair to consider wins and losses.

Statistics should be far more important in the Heisman equation. Unfortunately, the numbers are also a flawed measure. The quality of the opponent makes a huge difference; it would be unfair to compare the passing yards of Case Keenum, who plays for Houston in Conference USA, to those of Russell Wilson, the Wisconsin quarterback who faces better defenses every week. Unlike the NFL, or NBA, or MLB, there are too few common opponents in the course of a regular season to draw easy comparisons. It’s impossible to project Keenum’s numbers if he was at the helm of Ole Miss instead of Houston. It’s impossible to know how many interceptions Luck would throw if he faced better passing defenses than the Pac-12 has to offer. Ditto for Boise State’s Kellen Moore.

In addition, the skill of a quarterback’s teammates is crucial. Yards per attempt can be a good measure of a QB’s efficiency and ability to throw downfield, but it can also vary based on the quality of the receivers, and how many yards they typically gain after a catch. Completion percentage can be hindered by dropped passes. Interceptions can be unlucky, skewing the TD-INT ratio. And that’s just scratching the surface — as the truest team game, football statistics are the most prone to misinterpretation.

But in the end, winning and statistics are all we have. They’re the only objective measures. And, despite the flaws, I believe they’re pretty accurate. Over the course of a full season, bad luck is filtered out, and you’re left with a decent indicator of individual skill. Go beyond statistics, though, and you’ll soon find yourself at the mercy of hype. Hype is bad. Hype tends to reward players who are already on our radar. Hype is why Andrew Luck is considered a Heisman favorite despite the fact that it would be difficult to argue that he’s one of the four best quarterbacks in the FBS.

Let’s take a closer look at the top five quarterbacks in a few key statistical areas, beginning with ESPN’s QB rating. I won’t include measures like passing yards or completions, which favor offenses that rarely run.

If you take the average position of each quarterback in those standings, here’s how the top five candidates fare:

And, since he’s a top-five quarterback at best, and we haven’t even talked about running backs or receivers yet, tell me how, by any stretch of the imagination, we can even consider crowning him the best player in the country?

It can’t be winning. Case Keenum is undefeated. Kellen Moore has one loss. Russell Wilson has only two losses, both on heartbreaking long bombs. Brandon Weeden, who is somehow in the discussion without deserving to be, has yet to lose.

It can’t be big moments. In Stanford’s two difficult games this season, Luck nearly lost the perfect season with a late pick-six against USC and had his worst game of the year against Oregon.

It can’t be other stats, like passing yards. Case Keenum leads the country in that category, and is set to break the 4,000-yard barrier this weekend.

It can’t be the strength of opposing defenses. The passing defenses in the Pac-12 aren’t known for being particularly stingy, and certainly can’t compare to the Big Ten.

Another argument I’ve heard is that we should be impressed because Luck calls his own plays. A little research shows that he did this for the first time against UCLA in Week 5, and only sporadically since then. Even if it was more frequent, there’s still no reason to judge him based on anything but the results. It’s an impressive novelty, but still subject to its overall success.

So, who should win the Heisman? At this point in the season, here’s where I stand:

• Case Keenum has his three toughest games of the year ahead of him, if you count a potential C-USA championship game against no. 22 Southern Miss. If he finishes the season undefeated, and keeps up his current level of performance, his numbers are gaudy enough that he should win. Failing that …

• Robert Griffin III should win if he finds a way to beat Oklahoma. Failing that …

• Wilson should win if he overcomes the two losses and leads Wisconsin to a Big 10 championship. Unless …

• LaMichael James maintains his torrid pace and overtakes David Wilson for the most rushing yards in the country (despite missing 2.5 games with injury), and continues to average almost 8 yards per carry. Then he should win.

But Andrew Luck, fantastic quarterback and classy guy that he is, doesn’t deserve to be mentioned in the Heisman discussion. Maybe we know him the best, and maybe he’ll be the best pro some day, but he’s not the best player in the country right now. The Heisman should be synonymous with excellence, not hype.