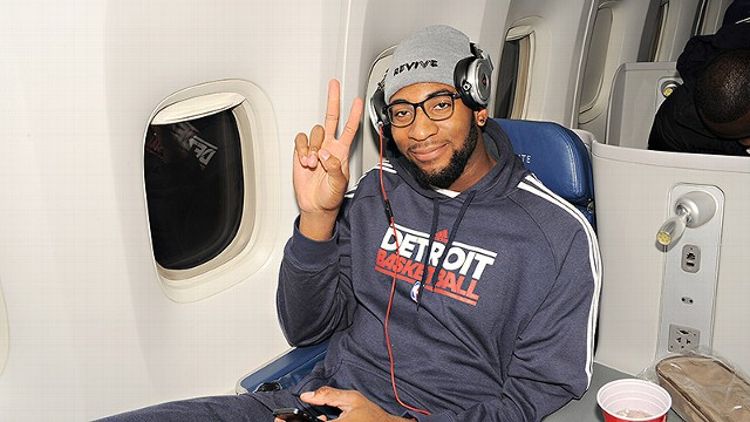 You may remember a few weeks ago when we told you that Andre Drummond won the summer. He used Woman Crush Wednesday on Instagram to seduce his celebrity crush, Nickelodeon star Jennette McCurdy, the story went mainstream, he sent her teddy bears and flowers, and he eventually landed a date in real life. It was great.

It started a with a “Real Date Night,” according to TMZ, and then there were reports that they were actually a couple. Then social media pretty much confirmed this. They went to Disneyland, played laser tag, held hands all over Beverly Hills …

And there were so many Vines.

• Drummond being way too tall.

• Their encounter with an older couple (a glimpse into their future).

Now Jennette McCurdy is writing about Internet Romance in the Wall Street Journal.

A month and a half ago I logged onto Twitter and saw my timeline clogged with people asking me to follow some account called “@DRE_DRUMMOND_.” Five tweets are easy to ignore; hundreds are not. Impressed by the amount of energy centered on this account, I of course had to click on it. I first read the bio attached: Official Twitter of Andre Drummond. Former UCONN HUSKY F, Now a Detroit Piston. Live by GOD, #T.A.G.O.D. Curious and admittedly ignorant in the sports arena, I took to Google for some research. I read the guy’s Wikipedia page … confronted by statistics and a bunch of basketball jargon, I gathered that he was gifted at basketball … and super, super tall. Not yet satisfied with my knowledge of this guy’s deal, I backtracked on his Twitter page a few months and checked out his Instagram … he appeared personable, youthful, and fun. And judging by the amount of me-related posts he had shared, it seemed he had been expressing his crush on me for quite some time. I found it sweet, gutsy, and flattering. It’s hard not to be impressed by a boy who will express his feelings for you in front of hundreds of thousands of people. I followed him back on Twitter and sent him a public message. We had a brief banter and then he sent me a private message with his phone number. Inevitably, I utilized it.

They started face-timing and talking on the phone and Drummond flew to California, and now here we are. Read the rest of McCurdy’s essay here, because it actually has some pretty solid insight into life with social media and the disconnect between real life and the stuff we share online. All part of Andre Drummond and Jennette McCurdy teaching us how to love in the 21st century.

As Dre put it recently: “A million pictures…… A million smiles :)”