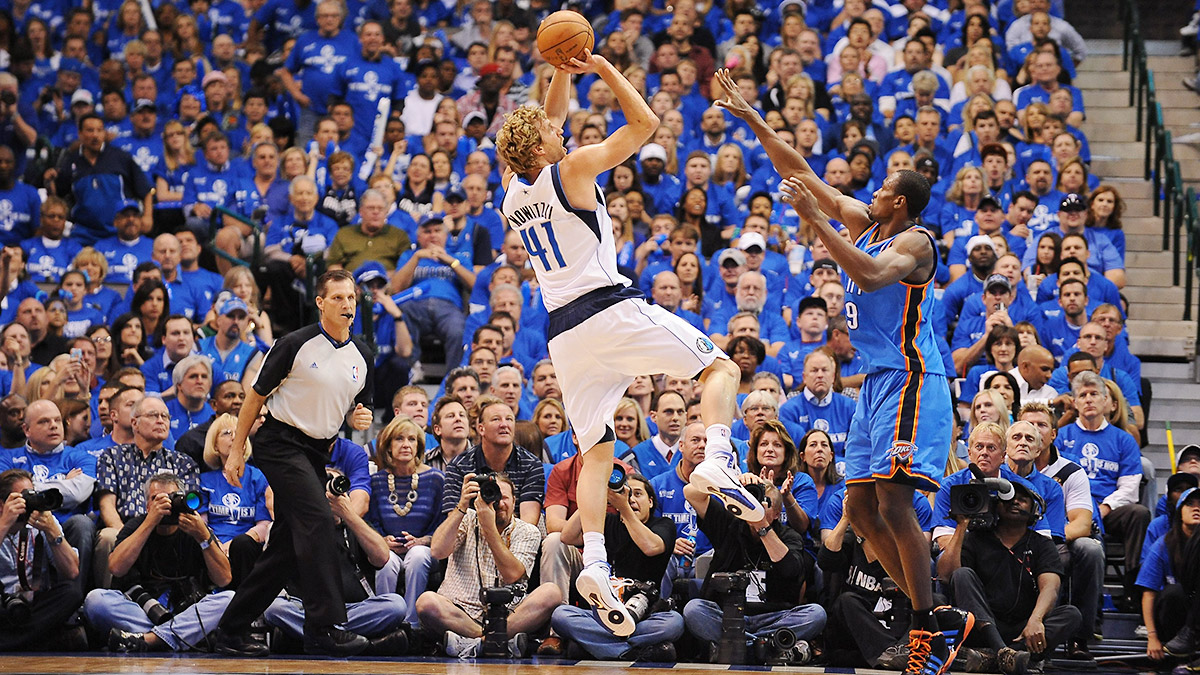 Basketball is about problem solving. That’s true of all sports to some degree, sure, but it’s especially true about basketball (and soccer), where the constant switch between offense and defense creates a steady flow of problems that need solving. What’s wonderful about a sport of flowing motions like basketball is that players have the opportunity to express themselves constantly throughout the course of a game. Today, let’s celebrate the different expressions from some of the NBA’s greatest problem solvers.

Dirk’s one-legged fadeaway is a special sort of move; it’s the kind of move that’s so inextricably linked with its owner that just the outline of it — with Dirk’s features grayed out — would still be recognizable. One, perhaps two hard dribbles, a half-spin, then a pivot away from the defender and a balletic hop off the back foot. Swish. It’s the most singular signature move in the game, and, combined with Dirk’s 7-foot frame, totally unstoppable. Whether he misses or not is in the hands of the basketball gods. Dirk and his fadeaway went through the 2011 playoffs like the hero in a martial arts movie fighting an entire dojo, culminating in a 48-point masterpiece against OKC in the Western finals. Dirk drew fouls on practically the entire Thunder team. He went on to win a title over the newly formed “not one, not two” Miami Heat. The greatest testament to the devastating effectiveness of Dirk’s signature move? Its imitation by those who have felt its wrath.

Warning: Do not attempt this move unless you have hands of a disconcertingly freakish size into which a basketball can nestle like an orange in a fruit basket. The maddening thing about Rondo’s behind-the-back fake is that you know it’s coming. Everyone knows it’s coming. He goes behind the back and you just know the ball is coming back out. But the conviction with which Rondo unleashes the move makes falling for it irresistible; it’s like Rodney Dangerfield hitting “I get no respect” like it was the first time he had ever said it.

It’s, of course, reductive to boil down the basketball contributions of one of the greatest, most versatile, most physically impressive players in history to just one move. But LeBron’s cocked-back tomahawk dunk is like a through line, spanning his entire career, going all the way back to high school. It’s also a bit out of place within the context of James’s game as a whole. Here’s a guy who can do anything there is to be done on a basketball court, not to mention is increasingly canny at leveraging his power off the court, and he dunks really only one way — arm cocked back for a hammering tomahawk. Woe be to those who try to stop it, for it is ravenous.

Tim Duncan’s patented old-man-off-glass shot is really an anti-move. It’s the kind of shot one could imagine being taken by the players who were shooting hoops right at the peach basket dawn of the game. The shot — often off of a simple turn-and-face — is casual in its effectiveness. There are no explosions of otherworldly athleticism or flashes of wicked deception. The shot is simply baffling in its austere simplicity. The only proper response to it is a shrug of the shoulders. It just fucking works. In other words, it’s just like Tim Duncan the player: timeless.

James Harden — Drive to the Middle and Get Fouled

James Harden’s crafty dribble drive to the middle, often off a pick-and-roll, sometimes in conjunction with a Eurostep, often resulting in a foul, is part undeniable talent and part side-eye-inducing rakish mischief. It’s like a tax shelter in the Cayman Islands; it’s legal, it’s effective, and it’s, essentially, money. And yet there’s something ever so slightly greasy about it. A whiff of “this is how the rich get richer” to it. Harden’s get-fouled move is an ambulance-chasing lawyer with a high basketball IQ and an impossible-to-argue-with .618 true shooting percentage.

The crossover has become one of the basic building blocks to great guard play. It’s like a well-worn blues lick; every musician has one, but how many can make you feel like you’re hearing it for the first time? Chris Paul, Kyrie Irving, and Jamal Crawford can. Paul and Kyrie use their crosses as set-piece themes within a wickedly ornate whole, setting up spins, hesitations, and look-aways in a video game flood of moves that weaken whole defenses until that final boss pass or fallaway or layup is unleashed. Crawford’s cross is more utilitarian, a behind-the-legs skip with a shoulder shimmy that usually ends with a playground 3-pointer that 99.999 percent of the players in the world would get benched for.

Steph Curry’s pull-up is one of the most unnatural, uncanny, and unfair shots in NBA history. Steph’s ability to rise off the dribble from anywhere inside the arena is the golden gun of NBA jump shots. It’s the kind of shot you would take if you were cheating at video games. Of Curry’s 17.7 field goal attempts per game last season, 10 of them were pull-ups, the most in the league. Curry converted 43.7 percent of those pull-ups; only Dirk shot a better percentage on pull-ups (47 percent), but he took only five per game. Eleven of Steph’s 24-points-per-game average came from his pull-up jumper. He scored 853 points off pull-ups, nearly 200 more points off of pull-ups than next-highest-guy Kevin Durant. Steve Kerr has talked about cranking up the ball movement next season to make things easier for Steph. Only 19.7 percent of Steph’s 2-pointers and 45.6 percent of his 3s were assisted last season; league average for teams was 51.8 percent and 83.7 percent, respectively. So, we may see just a bit less of the league’s most singular, solo weapons.

Sarunas Marciulionis may be the commonly acknowledged biological father of the Eurostep, but the two names most commonly associated with the move are Manu Ginobili and Dwyane Wade. Manu probably did more than any one player to popularize the move in the NBA. Manu is so associated with the move that, when asked who had the best step back in 2012, LeBron even gave Manu the edge, albeit slight, over his then-teammate Wade (while also throwing James Harden some deserved Eurostep shine), then explained his formulation with, “I mean, you say Manu because he is the Euro guy, he’s European.” Which, I mean, kinda, yeah, in the same way that Kevin Love is, sure.

Manu’s Eurostep is a slick con; Wade’s is a sucker punch. Besides the obvious lefty/righty difference, Wade keeps his dribble a bit longer into the move than Manu does. And whereas Manu often does a little ball fake before changing direction, Wade explodes into the cutback step like a magician yanking the tablecloth out from under the place settings.

Ray Allen’s shooting form is perfect. His shooting form, famously, remains millimeter-to-millimeter unchanged down through the years of his incredible career. Because why change perfection? When Allen revealed to Jackie MacMullan in 2008 that he has a borderline case of OCD, his devotion to re-creating, on an almost atomic level, his jumper time and time again suddenly made sense. It was also, somehow, a little encouraging, in that it explained how a human being could conceive of, build, and maintain something so unattainably flawless without having superpowers.

Blake Griffin — Dunk Off a Pick-and-Roll

The knock on Blake is that all he does is dunk. It’s the same criticism that has always been leveled at the light-fantastic cloud-walkers of the NBA, from Kemp to Shaq and now to Blake. Putting aside that the charge is untrue, this line of argument has always bothered me. As if a guy who “just” dunked all the time with the best basketball talent in the world arrayed to stop him would not be mind-bendingly entertaining. As if dunks aren’t, in fact, awesome, and one of the indisputably great things about basketball. It’s the same thing that grates me about the Icarus myth. Sure, Icarus flew too close to the sun, but the dude did fly.

In a sense, Russell Westbrook’s signature move is really a particular species of high-grade intravenous exuberance. Russ has been described as “basketball cocaine” and, while I can’t speak to the accuracy of the metaphor, it does capture something of the Westbrook experience. In a perfect world, Westbrook would probably not take some of the shots that end up resulting in still-smoking six-shooters being slammed down into their holsters. In a perfect world, he might swing the rock around a bit more, not come down on the floor and pull up from 28 feet on a 1-on-4. Whatever.

If there were a Divisive NBA Player championship belt, Carmelo Anthony would be the title holder 11 years running. Sky-high usage rate, a tenuous dedication to defense, and a pocketful of first-round fishing trips have stuck Melo with the label of “Guy You Can’t Win a Title With.” I was not a fan of Denver Melo, and I absolutely subscribed to the lone-gunner image of Anthony. Until the last two seasons. Twenty-eight points, 7 rebounds, with a 24.8 PER in 2012-13 (yes, he led the league in usage rate with 35.6). Twenty-seven points, 8 rebounds, with a 24.4 PER last season. Peak Carmelo, power forward Melo, whose combination of strength and quickness can create mismatches, won me over.