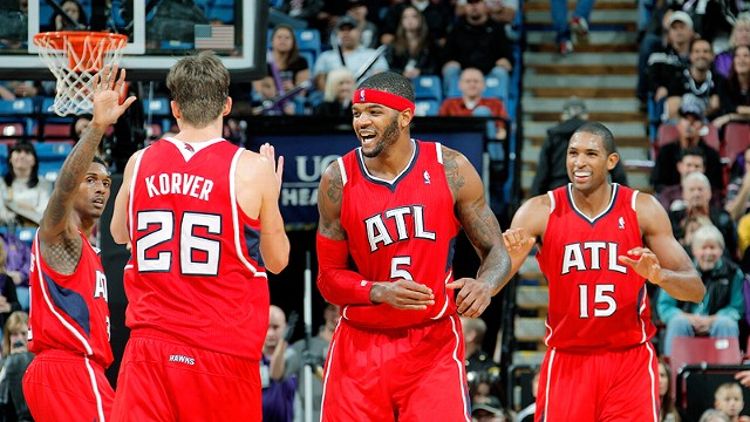 The Atlanta Hawks should be one of those NBA teams whose present doesn’t really matter. There are a depressing number of such teams when you really start to think about it, and the Hawks fit the definition perfectly — a nice collection of players, almost all of whom are on expiring contracts, playing for a franchise with 1.5 of its two Hawk eyes on future cap space. This team could win 48 games, snag the no. 4 seed and win a playoff round. But would it really matter?

What if it did? The Hawks are 10-5 and thriving on defense — originally thought to be a weakness — in an Eastern Conference that hasn’t played out as expected. The Nets and Knicks have surpassed the Pacers and Celtics in the race for no. 2 behind Miami, with the Knicks emerging as the early front-runner for that spot. But New York is old and already banged-up, with the Amar’e Stoudemire dilemma hovering over all their success. No one knows when Danny Granger, Andrew Bynum, or Derrick Rose will play again this season. Is it ridiculous to think Team Expiring Contracts could be playing in the conference finals — close enough to June that one ill-timed injury or some other lucky break can put a team in a place even they didn’t expect to reach?

“We are a confident bunch,” Hawks forward Josh Smith tells Grantland. “We have enough talent to do it. We’re unselfish, and when guys are willing to sacrifice and buy in, you can have success. If we can keep this chemistry up, we’re gonna have a shot to be in the conference finals.”

Smith has raved about his team’s chemistry, and even he seems surprised about all these soon-to-be free agents getting along. “Pretty much everyone here is in their contract year,” he says, “and you know how guys play it. People are pressing and aggressive in going for their own. But that’s not the case at all on this year’s team.”

Defense especially requires cohesion and selflessness, and that’s where the Hawks have unexpectedly succeeded, despite a glaring lack of size on the wing. Atlanta ranks fourth in points allowed per possession, and they’re doing almost everything well, save for cleaning the defensive glass — a predictable early consequence of downshifting from giant wings (Joe Johnson and Marvin Williams) to much smaller ones. They’re avoiding fouls, protecting the rim, and forcing turnovers like gangbusters; only five teams have allowed a lower shooting percentage on shots in the restricted area, and none have forced more turnovers per opponent possession.

Jeff Teague alone has nabbed a bunch of steals that look exactly like this:

There’s nothing fancy going on in that play. Atlanta’s main defenders against a Cleveland side pick-and-roll — DeShawn Stevenson and Al Horford — try to force the ball handler (Alonzo Gee) away from the pick and toward the baseline. If you turn up the volume, you can hear Horford yelling “BLUE! BLUE!,” one of the NBA’s code words for this kind of defense. Stevenson blocks Gee’s path to Tristan Thompson’s screen, while Horford slides toward the paint, enticing Gee into the pocket between the two Atlanta defenders. This is basic NBA stuff; almost every team defends side pick-and-rolls this way.

Atlanta has a couple of things going for it. In Teague, Lou Williams, and Devin Harris, they have three pesky little guards happy to crash down upon the open Thompsons of the world on this exact play and reach for steals. And they have Horford and Smith, two vocal defenders who’ve played a half-decade together. They’re fast, long, and active, and they know each other well enough to understand intuitively when to switch assignments, when to help, and (perhaps most importantly) when they’ve helped enough and can return to their original man. “We work really well together,” Smith says of his partnership with Horford. “Communication is a lost cause in a lot of places in the NBA, but when we communicate, we make things a lot easier.”

Smith and Horford prefer to slide side-to-side against opposing point guards on the pick-and-roll instead of leaping out at them. Their speed allows them to do this a few steps above the foul line — well outside the comfort zone of slower bigs who prefer to stay closer to the hoop. Closing off the pick-and-roll out there can really stall out an offense.

Their comfort with each other allows them to do that job, and others, without overhelping. Smith especially will almost appear lazy on help defense, and while he actually is a bit lazy at times, what looks like “blah” effort is actually Smith’s calculated understanding that with Horford behind him, he doesn’t have to stray too far from the screener on pick-and-roll plays. He and Horford are good at anticipating when a point guard is about to pick up his dribble, making it safe to return to the big man rolling to the hoop or popping for a jumper. And if they jump back too early, they can do so knowing the other one is ready on the back line to help combat penetration.

“Some bigs help too long,” Smith says. “Al and I use our athleticism to plug the hole, react, and get back to our man.”

The Hawks have also had moderate success playing more zone than most teams. It all sounds great. But can they keep it up? Atlanta’s early schedule has featured the Heat and Clippers, elite offenses, but eight of their first 14 games have come against the six worst offensive teams in the league so far. Lots of those bad offenses are naturally turnover-prone, and Atlanta’s rate of forcing turnovers will probably come down some. When that happens, Atlanta will have to clean up its issues on the defensive glass — they’re currently 21st in defensive rebounding rate — and maintain their low foul rate. “We have to gang-rebound,” says Hawks coach Larry Drew.

Then there’s the issue of building a productive offense that actually gets to the line now and then. Atlanta is only 16th in points per possession, and only three teams have gotten to the line less often per field goal attempt. “We are a jump-shooting team,” Drew says. “But we have to make a conscious effort to get to the basket.”

There’s good news and bad news here. The bad news: When Williams and his trickery are off the floor, Atlanta essentially never shoots free throws. With Williams in the lineup, they get to the line at an above-average rate; when he sits, the Hawks get there less often, per shot attempt, than any team in NBA history, per NBA.com and Basketball-Reference.com.

(As an aside, Smith is already fake-mad that Williams, as is his custom, has monopolized Atlanta’s end-of-quarter two-for-one opportunities. There’s a reason NBA nerds have nicknamed the practice Lou-for-One. “He just stole it,” Smith says with a laugh.)

Atlanta doesn’t have much else to fall back on. They’re already leading the league in field goal percentage in the restricted area, their 3-point shooting has been about where we’d expect (including a red-hot 42 percent from the corners) and they take a decent amount of low-value mid-range shots. If they don’t find some more free throws, it might be hard to build an above-average offense.

Horford’s pick-and-pop game is hugely valuable, but it’s never generated a lot of fouls. Smith has a nasty post-up game, but it’s just as often a vehicle for his fantastic inside-out diagonal passing as for his aggressive rim attacks. And Smith rarely catches the ball rolling to the hoop on the pick-and-roll; he took only 85 shots out of the pick-and-roll all last season, a low number for such a skilled big, and most of those were jumpers, per Synergy Sports. “That’s just how I work,” Smith says. “I like to catch the ball before I get into the paint, so I can see where the defense is and make the right play.”

Drew says he wants more hard rolling to the hoop from all his big men, Smith included. He could also use more of everything from Harris, once a foul magnet whose game has been in sharp decline on both ends. Opponents are playing an extra step or two off Harris, and he has to make them pay with jumpers or hard drives when the ball swings his way on possessions like this one:

The Harris/Smith/Horford trio has been especially awful; Atlanta has scored just 95.3 points per 100 possessions when those three play together, down from their overall mark of 101.3, making that trio the least productive among Atlanta’s 20 most-used three-man groups. Atlanta attempts well below its average number of 3s when these guys play together, and they don’t compensate with foul shots. Using Williams (for three throws) and Korver (for 3s) to fill out such lineups might work, but Drew has played that five-man group just eight minutes all season. He closed Wednesday’s win over Denver with those three, Williams and Stevenson, which has a similar effect.

And that’s the thing: Drew’s still experimenting, especially with wing and guard combinations. No single lineup has appeared in more than six of the Hawks’ 15 games, a huge outlier when compared with the rest of the league. Drew prefers to play with two of his little guys — Williams, Teague, Harris — as much as possible, he says, even as he doles out major minutes to ultra-big lineups featuring Horford, Smith, and Zaza Pachulia together. Those big groups have scored surprisingly well — about 104 points per 100 possessions, a top-10 rate. Drew enjoys brutalizing teams by playing Smith at small forward and posting him up, and so far, it’s worked.

Most lineups have worked, actually. Fourteen of the 18 lineups with at least 10 minutes of court time this season have scored at a top-10 rate or much better. Three of the four laggards — including the two most often-used of the three — feature the Harris/Smith/Horford trio of death.

The Hawks have time to figure this stuff out — to see what works and what doesn’t, and what numbers are really meaningful. Their start is encouraging, but it’s unclear just how real it is.