Among the Boobirds at David Stern’s Final NBA Draft 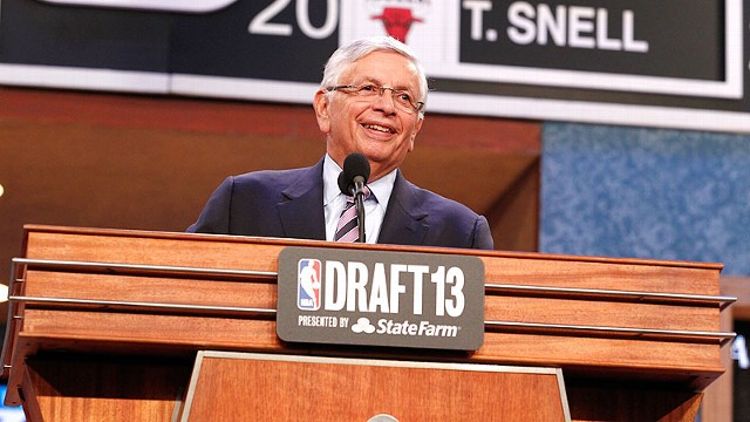 The last thing that really made sense, before my brain completely melted, was the mimes. Looking through my notes, I had scribbled “28 — Spurs, Livio Jean-Charles,” and underneath those words was scrawled “I find mimes.”

I had staggered down from the 200 level where fans had been heading for the exits like the building was on fire ever since the Knicks took the 24th pick in the corporeal form of Tim Hardaway Jr. That took the heart out of the upper level with the exception of four truly insane, possibly inebriated teenagers in Knicks throwbacks screaming “HARDAWAY! HARDAWAY!” Fatigue had wrapped its nebulous arms around the building, the crowd barely able to muster the energy to continue the traditional booing of the commissioner. Staggering off the escalator and onto the ground-floor level, I glanced through a doorway leading down to the lower bowl, and caught sight of the unmistakable black-and-white striped sweater and black beret uniform of a mime there in the crowd. Only, as I drew near, it became clear that it wasn’t a mime, but a faux-Frenchman, clutching a corner of a French tricolor in one hand and a baguette in the other. That was toward the end, though. Better to go back to the beginning.

The pitch was to embed myself in the cheap seats, among the worst, most unhinged of the David Stern boobirds on this, his final draft as NBA commissioner. Kind of like Hunter S. Thompson’s book about the Hell’s Angels, but instead featuring crazed, bellowing NBA fans.

The NBA draft is a weird beast; it’s essentially a celebration of terrible basketball teams wrapped in just enough stagecraft and pomp to make you occasionally forget that you’re sitting there watching an hours-long business transaction play out in real time. It has always baffled me that people are willing to pay good American currency for the right to sit inside an arena and watch Stern call young men in bad suits — many of whom may never cobble together a proper NBA career — up to the podium for a handshake every five minutes or so. And that’s just the first round.

Stern has presided over 30 NBA drafts. And for a little more than a decade now, one of draft night’s traditions — along with sartorial regret time bombs and a blizzard of real-life fantasy basketball punditry — is the near constant heckling of Stern by the gathered, aforementioned bafflingly insane persons who make up the draft’s live audience. It is a relentless release of sarcastic bile and boos that Stern receives with an air of imperious amusement and the sly grin of a dominatrix grinding a stainless-steel stiletto into a client’s vertebrae. Yes — boo, you silly creature; you’re paying for it, after all. The significance and the cause of the booing seems to have morphed over time. There have been times, in years past, when the booing seemed truly angry, the New York–centric crowd lurching about for any way to release the pent-up frustrations of rooting for a shitty team, run shittily, by shitty, unreachable cads. And so Stern became the focal point, the stand-in. The 2006 draft is a good example of this. Sometimes, it felt as if it was in response to his autocratic rule — lockout threats, the “Don’t Dress Like a Black Person” dress code — with the draft being the best and only opportunity to let him have it. Lately, though, it’s seemed somewhat rote, reflexive. Something that’s done because it’s always been done, like hanging a wreath during the holidays, even though, what in the hell does a wreath mean?

As the commissioner is introduced, a storm of boos forms before he even sets foot on the stage. Deep, rich booing from every corner of the arena, growing to a crescendo as he walks to the lectern. From my vantage point in the upper level, most of Stern’s announcement before the first pick was nearly impossible to hear over the din. What was quite clear, though, was that Stern — even more so than in years past — was drinking it up. “Good evening and thank you for that enthusiastic Brooklyn welcome,” Stern crooned through a smirk. He met each rise in the volume of jeers with a smile, like a flower turning toward the sun. “And thank you to our passionate fans,” he said, raising his hand as a Roman emperor might have, palm turned up, pausing to allow the boos to replenish him.

That onslaught would turn out to be the audience’s hardest punch.

With each consecutive pick, Stern got stronger, and the crowd grew weaker. By the sixth pick — Nerlens Noel to the Pelicans — Stern, feeling the boos to be insufficiently loud as to befit his stature, goaded the crowd with a beckoning come on gesture. By the 16th pick, the waning boos were dappled with a smattering of applause. By 20, the cheering had overtaken the jeers; Stern paused at the podium before speaking, taking the measure of the crowd. Then at 21, Stern unleashed a haymaker. “We’ve had to explain to our international audience,” said Stern, to a drizzle of tepid abuse, “that the boo is an American sign of respect.” Huge cheers erupted from the crowd, along with much sincere laugher. A skinny usher wearing a dreadlock tam the size of a small planet slapped me on the shoulder and screamed, “He loves it! He loves it!” Yes, I do believe he does. Stern’s swag on a trillion now. Two picks later, Stern laughed in everyone’s face. “Your enthusiasm seems to be waning,” he teased, pronouncing “waning” like a schoolyard bully who wants to know why you won’t stop hitting yourself. Then at 27, like a conductor calling his orchestra to attention, came the knockout blow. David Stern gives zero-billion fucks.

By the 28th pick, I had seen enough. Call the fight, David Stern over Boos, TKO in the first. Time to stagger back downstairs, where all that was left were the mimes who turned out to be French who were actually pretending to be French. It was Stern’s last hurrah and he outlasted us all. As he left the stage for the last time, flanked by commish-in-waiting Adam Silver and Hakeem Olajuwon, the crowd was chanting “We want Da-vid! We want Da-vid!” After 30 years, he had won us over.