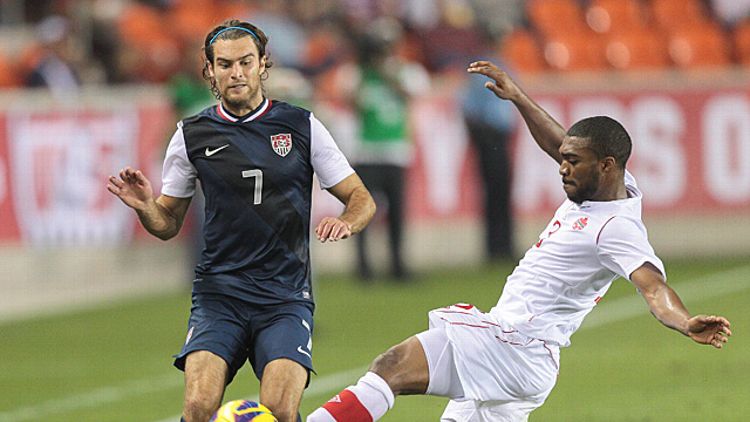 The first United States men’s national team friendly of every new year is a predictably strange affair. It comes at the end of a long training camp and features roughly two dozen tired guys, the vast majority of whom are not first-choice players for the USMNT. Many of them are not even second or third on the positional depth charts. The group traditionally consists mostly of players in between Major League Soccer seasons, as well as a few assorted refugees from teams in one of the Scandinavian leagues that take a long winter break so their fans don’t freeze while watching a mid-January match. It’s a moment to make impressions — sometimes first, sometimes final.

Head coach Jurgen Klinsmann called the typical gathering of players this year but attempted to add some gravitas to the month-long affair that culminated with Tuesday night’s abysmal 0-0 draw against Canada. His reasons for doing so were both practical and ideological. For one, the Americans are in a slow transition at a few key positions, as both the in-flux center back situation and the uncertain status of Landon Donovan are creating a number of problems.

The camp gave Omar Gonzalez and Matt Besler, the men in the middle for the Los Angeles Galaxy and Sporting Kansas City, respectively, a chance to show they belong alongside Geoff Cameron instead of Carlos Bocanegra, Clarence Goodson, Maurice Edu, Oguchi Onyewu, Jay DeMerit, or … choose your own adventure. The camp also gave midfield hopefuls — including Graham Zusi, Alejandro Bedoya, Brad Davis, Benny Feilhaber, and Josh Gatt — a long spell to demonstrate they could fulfill the role of Landon-in-Training. Furthermore, the fact that the first match of the final round of 2014 World Cup qualification was next week meant that the January camp participants had a real chance to be on next Monday’s plane to Honduras. Klinsmann said as many as a third of them would make the trip.

There were real reasons why the training camp and Tuesday’s game was “Big Picture Important.” But mostly, the first match of 2013 — the Centennial year for the United States Soccer Federation — felt more important than normal because Klinsmann wanted it to feel that way. This is part of the German’s “24/7” philosophy, which basically holds that American players need to constantly work harder at making themselves better. He’s not entirely wrong that they currently don’t, nor is this a new brainstorm of his, but he is becoming increasingly vocal about calling out his charges in public. The coach told the Wall Street Journal that Clint Dempsey, arguably the most successful American ever to play in Europe, “hasn’t made s—” at a club level. The former West German star then told anyone who would listen that Mix Diskerud, a talented, 22-year-old up-and-comer, needed to be better, stronger, smarter. The public method of delivery and the strength of the message were a bit surprising, coming from a man who usually smiles and jokes his way through press conferences. (It’s also big talk from a guy who, rather awesomely and ridiculously, uses part of his $2.5 million per year salary to fly a helicopter to work, but you’re entitled to your opinion after you win a World Cup, score in every major international tournament you play in, and get partial credit for reviving soccer in Germany.) Klinsmann, it seems, is going on the attack to inspire his crew. It is, we are led to believe, all part of his grander plan for the Future of Soccer in America.

This was the backdrop when the United States national team took the field at BBVA Stadium in Houston to play a Canadian team that hadn’t won on U.S. soil since 1957 and last beat the Americans in 1987, when 17 of the 23 members of the current Stars and Stripes camp hadn’t even been born. The Canadians scored one goal against their southern neighbors in the previous nine matches and lost 4-0 to a far-less-than-full-strength Denmark side last week. Simply put, they were the inferior squad, although one that did manage to draw the Americans, 0-0, last year, a result Klinsmann was desperate to improve on.

In the first half, his team looked like a group that barely knew each other’s names, much less one that spent nearly a month working together. Houston’s Brad Davis, playing in front of 11,000 adoring Dynamo supporters, made a few off-ball runs but didn’t see any passes come his way, and the rest of the starters spent the first 45 standing around trying not to make any mistakes. They dominated possession, but only in the most unimaginative, nonthreatening way possible. The second half was a bit better, as Josh Gatt injected some pace on the left flank (though he showed his youth by over-dribbling) and Benny Feilhaber delivered a couple of excellent free kicks. Brad Evans, playing at right back (where he should be rather than in the attacking midfield role he was thrust into during the first half), made a few nice overlapping runs. There were some chances to score. But still, the final whistle blew, the rains came down, and the U.S. had no goals.

There are two ways to look at the result. The first one, the easy one, is that it was a terrible, horrible, no-good game. Which, honestly, is fair. But also, not helpful. If the goal of an international soccer team of America’s caliber is to qualify for the World Cup, and do as well as possible in said World Cup, then a 0-0 draw in a friendly against Canada on a random wet January evening doesn’t much matter. Sure, the viewing audience would like to see a win — or, hell, anything interesting — but let’s face the facts: Klinsmann trotted out a lineup that features maybe one player who would start in a match that counted for something. Also, give Canada credit for rebounding from last week’s debacle, staying organized, and forcing an impotent U.S. to beat them. They can’t; we’ve seen this play before, both in last year’s 0-0 draw and when the Under-23 lost 2-0 in Olympic qualifying. The fact that the American coaching staff continues to be surprised and almost offended that Canada would play this way is perhaps the most concerning thing of the entire ordeal.

Soccer is not a game where you need a deep bench. You need 11 starters and some extra talent for special situations as the game dictates. At most, you can play 14 players per game. Klinsmann already has his first team. They’re playing in Europe and Mexico and will fly to meet the side in Miami this weekend. Against Canada, players like Zusi, Gatt, Kyle Beckerman, and Eddie Johnson showed enough to be able to fill the spot-sub roles, but we already knew they could. Besler and Gonzalez had little to do, but performed well enough to warrant further consideration. The latter center back’s biggest impact was probably showing that he can replace Bocanegra’s productivity on the attacking end, as Gonzalez nearly headed home a free kick or two. (It says a lot about Tuesday’s fixture that the highlight of the night was the attacking prowess of a defender.) Feilhaber, suddenly back in the national team picture after three solid weeks of camp, was the night’s big winner, while Diskerud, who didn’t even make the game-day 18, was the biggest loser. But overall, the match was a small, self-contained disaster. Nothing more, nothing less.

“We want to see our players stepping it up tomorrow night and prove a point. They deserve to finish off on a high note,” Klinsmann said a day before it started.

The team, pretty emphatically, did not. In fact, not hitting a high note was the only emphatic thing they did all night. Luckily for everyone involved, as much as Klinsmann wanted to make the game count for something, it doesn’t. What’s important is what happened behind closed doors during the three-week camp and what happens next Wednesday when the Americans look to steal a point or three in Honduras. The next January camp is more than 11 months away. It didn’t end a moment too soon.