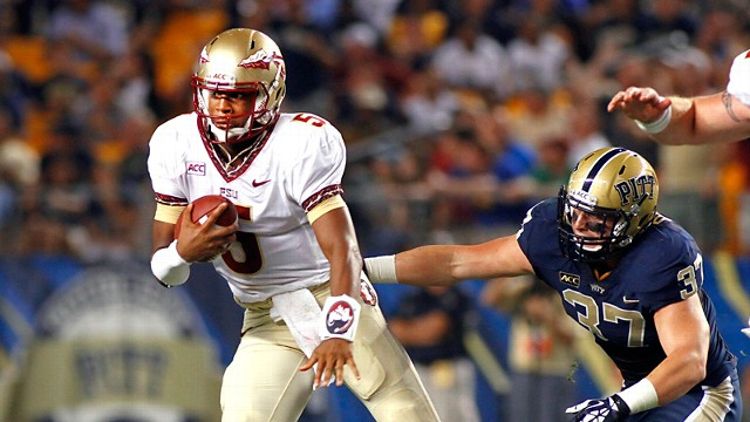 We can’t have been the only ones steeling ourselves for disappointment prior to Monday night’s Florida State–Pitt bout. The 24-hour, high-speed news cycle has us hardwired for backlash. A two-sport star, acclaimed as the best quarterback prospect in the class of 2012, coming in with this kind of bookworm background and these dance moves? Taking his first collegiate snaps in a conference game, on the road, alone in prime time to conclude the first weekend of college football? As a redshirt freshman? There was nothing about it that didn’t feel too good to be true.

If there was one thing we didn’t expect out of the Week 1 finale, it was Florida State quarterback Jameis Winston turning out to be exactly what he’d been made out to be.

Winston exited the field of play in Pittsburgh having completed 25-of-27 passes (and if you watch the above video all the way to the end, you’ll see it probably should have been 26) for 356 aerial yards, 25 rushing yards, and five total touchdowns. His first-game highlight reel will be a monotonous affair — completed pass after completed pass after completed pass. Cameras caught timely shots of fan signs reading “FAMOUS JAMEIS,” and nicknaming comedy pyramids were erected. Winston broke Danny Kanell’s single-game completion-percentage record for the Noles and faced onrushing defenders with serenity unbecoming an underclassman. On the rare occasions when Pitt invaded the studio apartment his offensive line had set up for him, Winston took his hits and got back up. He did not commit a turnover.

Then Winston got into the media room, dropped “it’s a process” twice, spread the credit around to his teammates, and displayed age-appropriate glee at playing Monday-night football in a pro stadium.

This absolutely is a process, and it’s going to get harder for Winston. Sooner or later, he or a key teammate will have an off game. But bad outings will be salvageable for the next month or so thanks to the schedule, and if you like pretty passes thrown with little resistance, stay tuned: FSU takes a week off, then hosts Nevada and Bethune-Cookman before traveling to Boston College. Mid-October will be prime Nole-watching season, with Maryland in Tallahassee on October 5 and a trip to Clemson on October 19. (Is it selfish to hope the Tigers’ secondary fails to improve between now and then?)

Winston quarterbacking a ranked Florida State team means we’re going to hear a lot about him over the course of the season, no matter where his trajectory takes him. You might find yourselves growing sick of hearing about him. That’s the way these stories go.

But for today, let’s bask in a splendid performance, and relish not having to temper our expectations for him just yet. Let’s give thanks for a game that bore a passing resemblance to the end of a Labor Day fireworks show: an entirely enjoyable finish to a weekend that gave us more quality games than we asked for or deserved.

“You don’t know the outcome,” Winston said after the game. “Only thing you can do is expect it to be great.”

Whatever you say, kiddo. Right now, we have no reason to believe otherwise.