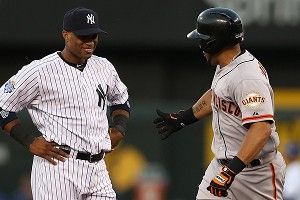 Melky Cabrera makes me laugh. Melky Cabrera enrages me. Melky Cabrera is basically a mythical con man, like the deceitful coyote or Loki the shape-shifter. Hell, not to get Shakespeare all up in your sports, but he’s a modern Puck, whom Wikipedia describes as “a clever, mischievous elf or sprite that personifies the trickster or the wise knave.” Sounds right to me. There’s just something about him; something impish, something needling, something infuriating. It’s like, by his very existence, he’s trolling Major League Baseball and all its fans. His job — no, his purpose — is to be irksome. That round little face, and that fiendish little smile, are designed to piss you off.

And what better way to fulfill his destiny than going out and winning the All-Star Game MVP with a 2-for-3, two-RBI performance that included the backbreaking home run? Of course that happened. Melky Cabrera is an evil genius, and I’m in awe.

Yankees and Braves fans hate Melky Cabrera because his line as a San Francisco Giant this year is .353/.391/.519, numbers he never even approached in New York or Atlanta. Royals fans hate him because even though he had a very good year with Kansas City last season, they traded him to the Giants for Jonathan Sanchez, who is 1-5 with a 6.75 ERA this year. And if that wasn’t a sufficient reminder that it’s tough to be a baseball fan in K.C., he had to come back and win the goddamn All-Star MVP in Kauffman Stadium. Classic Melky move, right there. And don’t get cocky, Giants fans. He’s coming for you too. The coyote has no friends.

But it goes deeper than numbers or accomplishments with the Melk Man. It’s his style, it’s that glimmering I-know-something-you-don’t-know look in his eyes. But how to convince you? Should I describe how, with the Yankees, the main thing everyone talked about was how his friendship with Robinson Cano might be hurting the team? How his weird little hopping high fives aggravated us? How he was terrible in the postseason until inexplicably breaking out against the Angels in 2009, and how even that was kind of annoying, because he disappeared again in the World Series? How it was sort of a relief when he got traded, but how we instinctively knew the Melky chapter in our lives wasn’t over? How he got way out of shape toward the end of his time in New York, and even admitted it during this year’s All-Star break, saying, “I ate everything … I was 215 (pounds), 220 and now I’m 200. Now I eat good food: brown rice, fish, chicken”?

Maybe it’s better to just show you this video and draw your attention to the :52 mark:

Reaching out to slap five with Cano, his best friend and former teammate? Hilarious. And his deadpan facial expression is perfect. “What, did I do something wrong?” he seems to ask, like a misbehaving kid who knows he can’t get into trouble. And am I crazy-crazy, or is there something a little devious about the way he smiled when he thanked the Kansas City fans over and over during the MVP presentation?

Maybe not, but he’s in my head. Nothing surprises me anymore. Congratulations, Melky. You unleashed the ultimate troll job last night. You’re a very funny man, you’re great, and I’m pretty sure the highest compliment I can give is that brother, we hate you.