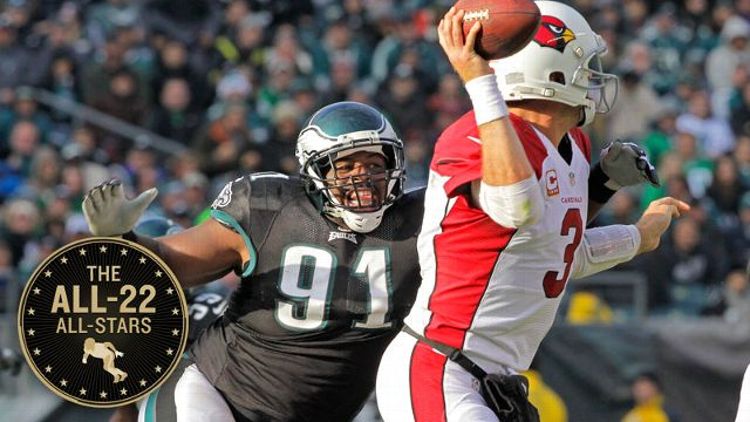 As long as Chip Kelly is around, the Philadelphia Eagles will be defined by offense. When Michael Vick and LeSean McCoy came out playing at warp speed on Monday Night Football in Week 1, we were in. There was a lull in the middle of the season, but with the arrival of Nick Foles and the Eagles’ four-game winning streak, Philly is back to third in offensive DVOA. This team can score, and that’s the reason the Eagles are sitting at 7-5 and are currently the favorites to win the NFC East.

Quietly aiding that run to the playoffs, though, is what Philadelphia is doing on defense. A third of the way into the season, the Eagles were among the worst defensive teams in the league. Those first six games included a 52-point performance by the Broncos (no shame in that), 33 from San Diego, and 26 by Kansas City. Even the Week 1 fireworks display was followed by a bundle of second-half points from Robert Griffin’s offense. After surrendering 20 points to the winless Bucs in Week 6, the Eagles were 30th in defensive DVOA. Today, they rank 25th, but by Football Outsiders’ weighted DVOA, which gives more value to recent performances, that ranking jumps to 21st. The point is the Eagles are getting better, and that may go a long way in turning a happy-to-be-here trip to the playoffs into one involving a win or two.

There are plenty of reasons for the improvement, but the simple one is time. The Eagles’ complete schematic overhaul this offseason wasn’t just on offense. Bill Davis brought his 3-4 scheme to replace Philly’s hallmark blitzing 4-3, and that sort of shift is bound to include a few missteps. Another reason is the play of Fletcher Cox.

Foles will get most of the attention when it comes to the Eagles’ 2012 draft, but as good as he’s been, Cox may be playing even better. The 12th overall pick in last year’s draft, Cox was a rotational player on a terrible Eagles defense last season. This year, as Philly has turned to a scheme with multiple fronts that asks the defensive linemen to do a little bit of everything, Cox has developed into a Pro Bowl–caliber player. Always considered an athletic marvel, his second year in the league has brought enough refinement and experience to turn him into a complete — and occasionally dominant — defensive lineman.

A four-star recruit from Yazoo City, Mississippi, Cox was a contributor from the moment he started his career at Mississippi State. He started four games as a freshman before becoming a full-time starter in his second season, and by the time his junior season was over in 2011, Cox was an All-American. It was enough to encourage him to bypass his senior year in favor of the draft, despite earning only a second-round grade from the draft advisory board. “I wasn’t satisfied with that,” Cox says. “I wanted to just go and outwork everybody.”

While many top draft prospects spend the time before the combine at specialized facilities in places like Arizona in Florida, Cox stayed in Starkville and train with Mississippi State’s strength-and-conditioning staff. “I wanted to be somewhere where they knew my weaknesses instead of going out somewhere and starting all over,” Cox says. It turned out to be the right choice. The combine was a showcase for Cox, who weighed in at 298 pounds and still managed a 4.79 in the 40-yard dash. By the time the draft came, Cox was considered a guarantee to go in the first round, and on draft day the Eagles jumped up three spots to grab him with the 12th overall pick.

Coming out of high school, Cox was a 240-pound defensive end, and even as he added weight while in college, explosion was always the trademark of his game. At every level, Cox was among the best athletes on the field at any position, and that advantage is something he was able to lean on heavily, even in the SEC. When Cox arrived at Eagles camp, it soon became evident that would have to change. “The speed, everything was just so fast,” Cox says. “And I was still learning on the go.”

His rookie year was the sort any organization would want from a raw, 21-year-old prospect dripping with potential, in that it was filled with improvement. Cox’s playing time remained steady all season (about 60 percent of the Eagles’ snaps), but his production spiked over the second half. Three of his four sacks came in Weeks 15 and 16, but even away from the box score, it was clear that Cox’s pass-rushing talents were starting to grow.

When the Eagles brought in Bill Davis to be their defensive coordinator, it meant an entirely different lesson from the education Cox received in his rookie season. Calling Davis’s defense — and what the Eagles have done this year — a 3-4 is the easy designation, but it isn’t exactly the right one. The Eagles play a variety of fronts, and when the installation of the defense began, defensive line coach Jerry Azzinaro told his players they better be ready to learn. “When I first talked to Coach Az, he told me they would have me line up everywhere,” Cox says. “No one had one specific position on the D-line. You have to know everything from end to nose tackle.”

Game in 25 words or fewer: An explosive, gifted defensive lineman who’s refined his talents as a pass-rusher to become a constantly disruptive force.

Cox’s speed and quickness made him an ideal candidate to succeed in the scheme change. Athletically, he would have no problem moving outside and squaring off against tackles. The key would be improving his technique, which was still lacking as he came into his second year. “Coach Az told me my hands had to get better in order to do what we do,” Cox says. It wasn’t just lip service, either. On the first day of OTAs, Azzinaro put both the defensive line and outside linebackers through a series of drills on the blocking sled. When Cox was a rookie, the sled was a seldom-used tool at Eagles practices, and he figured the drill was just an early-season teaching moment that likely wouldn’t be seen again. When the Eagles came out for practice the next day, the sled was back. Eventually, Cox realized it was never going away. “We hit the sled every single day,” Cox says.

That isn’t standard in the NFL, Cox says, but now a workday for him would feel incomplete without it. Working on hand fighting with teammates includes playing off whatever tendencies or habits a player might know about his fellow defensive linemen. The sled is a blank slate that helps in learning to master the same movements over and over, and that work has shown up in Cox’s play.

This is a play from the second quarter of Philadelphia’s Week 6 win over the Bucs. It’s second-and-long, a clear passing situation that has Cox (no. 91) shifted down into a 3-technique defensive tackle over right guard Davin Joseph.

On impact, Cox immediately gets his hands onto Joseph. It happens so fast and so fluidly that the initial push is actually combined with a club move using Cox’s left hand. With a single movement, he already has Joseph’s shoulders turned.

After initially swimming his right hand over, Cox then uses a rip to get under Joseph’s pads as he bends his rush toward Mike Glennon. This shot is from a little more than a second after the ball is snapped, and the play is already over. Joseph is totally beat, and few players are quicker in that five-yard stretch to the quarterback than Cox.

He hits Glennon’s arm as the ball is released, and it falls harmlessly to the ground for third-and-15.

Cox says that even as Davis and Azzinaro move him all over the defense, his favorite spot as a pass-rusher is still as a 3-technique. The quickness advantage he has over most guards is impossible to ignore, and it doesn’t hurt that he mostly lines up inside during passing situations. On second- or third-and-long, Cox’s mission as an interior lineman is simple: get to the quarterback. And he does it well. Through 12 games, Cox has 5.5 sacks and twice as many hits.

One of those hits came on the Eagles’ final defensive play against Washington back in Week 11. Chasing down Robert Griffin, Cox managed to bother the Washington quarterback just enough for Griffin to toss a jump ball into the end zone on third down. Brandon Boykin was there waiting for it, and with that the game was over. Playmaking late in games has become a staple for Cox this season, and he attributes that sustained effort to a couple different sources. The first is Azzinaro, for whom “How hard for how long” is a mantra delivered to his linemen. The second is the spirit of that position group within the Eagles’ locker room. No defensive lineman on the Eagles’ roster is older than 25, and at 22, Cox is still somehow the youngest member. “It just motivates us to go out and work, knowing that we’re probably the youngest defensive line in the NFL,” Cox says. “I had a conversation last week with Vinny [Curry] and Ced [Thornton], and we just said that we have five weeks to be the best. We have five weeks to show everybody.” Thornton and Curry have been having excellent seasons of their own. They might not be the best quite yet, but with a group that young, it’s only going to get better, and right now their play is a major reason Philadelphia looks to be headed toward the playoffs.