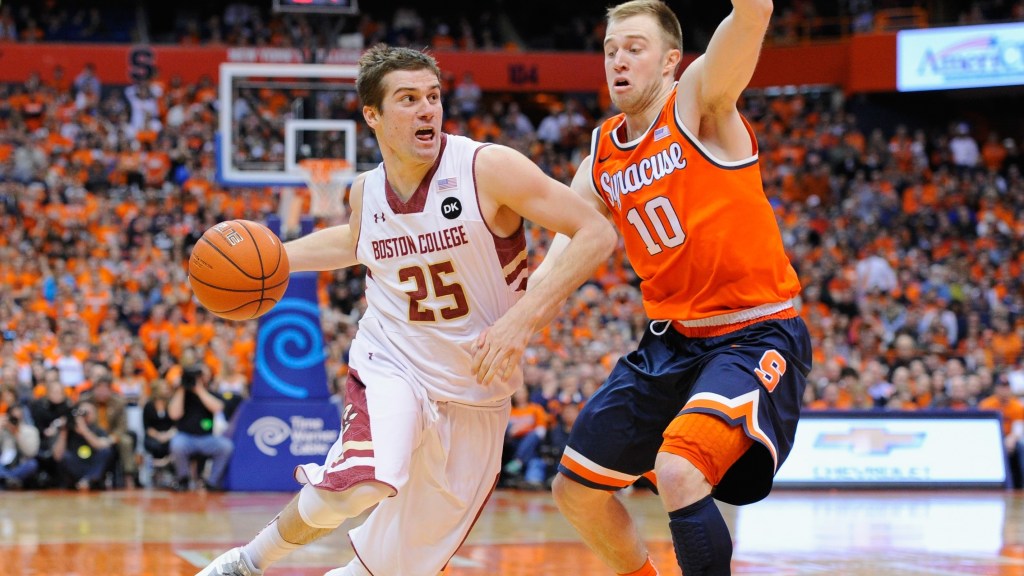 In case you were busy giving college kids too much pasta, here’s what you missed in sports on Wednesday:

• Previously undefeated Syracuse suffered its first loss of the season in surprising fashion, falling 62-59 to unranked Boston College at home. “Oh, we were definitely looking past them,” said Syracuse head coach Jim Boeheim after the game. “I mean, they had six wins and we have Duke on deck. Don’t be an idiot.” Boeheim then shrugged and said, “Honestly, I still couldn’t tell you a thing about how they play. They probably run an offense of some sort. But I was playing this bird flapping game on my iPad for most of the first half,” before making a fart sound with his mouth.

• Tuukka Rask made 37 saves as Finland knocked host country Russia out of the Olympics with a 3-1 quarterfinal win. When asked after the game if he took any extra pleasure in upsetting Russia at home, Rask pulled a heart out of his locker and yelled, “RASK! RASK! RASK!” When asked if he got the heart he was holding from one of Sochi’s many stray dogs, Rask covered his mouth in shock and said, “My word! No! Heavens to Betsy! Dogs are a most noble creature that I would never disrespect thus. I brought this heart from home.”

• Ted Ligety became the first American to win two Olympic gold medals in downhill skiing with his dominant win in the men’s giant slalom. Now I saw that slalom run on TV, and it was pretty big. But giant? Come on. That’s a bit much, don’t you think? Classic millennial grade inflation, if you ask me. Sure, it’s bigger than a normal slalom. But can’t we just let “bigger slalom” suffice? Does everything have to be so hyperbolic in this day and age?

• Dwight Howard had a double-double as the Houston Rockets throttled the Los Angeles Lakers, 134-108. Despite the win over his former team, Howard looked distraught after the game, saying, “Man, if ever there were a night to cover fools in Dwight-Out, this was it. I had so many Dwightisms ready to go it was insane. I was gonna tell Pau, ‘Gasol? More like all-gas!’ and then fart on him. I was gonna tell Kobe, ‘Yo man, you smell this Kobe beef?’ and then fart on him. I was gonna tell Nash, ‘You better build Nash Bridges over this fart,’ and then not fart on him for a second, and then come back and fart on him and yell, ‘Don Johnsoned!’ But everyone was gone.” Howard then shook his head and added, “I tried to improvise. I called Jodie Meeks ‘Jodie Reeks,’ but I didn’t even have the heart to fart on him. No one got covered in Dwight-Out at all. Or farts.”

• The Lakers’ busy Wednesday continued when the team dealt Steve Blake to Golden State in exchange for Kent Bazemore and MarShon Brooks. “Why didn’t this happen earlier?” a still glum Howard said upon hearing the news. “I could have told Bazemore that he should blaze more to cover up the smell of my farts. And then I would fart on him. That would be how that joke ends. With me farting. On Kent Bazemore.”

• Iman Shumpert sprained his knee on the eve of the trade deadline, but his New York Knicks were able to hold on for a 98-91 win over the New Orleans Pelicans. A boy and his father did not watch the game in Queens together. Before tipoff occurred, the boy brought his father a drawing he had made in class using colored pencils. In the foreground, Shumpert was on the court, writhing in pain. His knee was red and orange. In the background, Knicks center Tyson Chandler was sobbing. The father looked over the picture and said nothing. The boy asked, “Is it good?” The father shook his head. The boy stormed out of the room in tears and locked himself in the bathroom, leaving the father alone as the game began. But the man did not look up at the game, and instead looked at the drawing for a long time. When he finally did set his eyes on the television, the father saw that Shumpert was on the court in pain. The father whispered, “It’s not good. It’s great,” but his boy would never hear his praise.