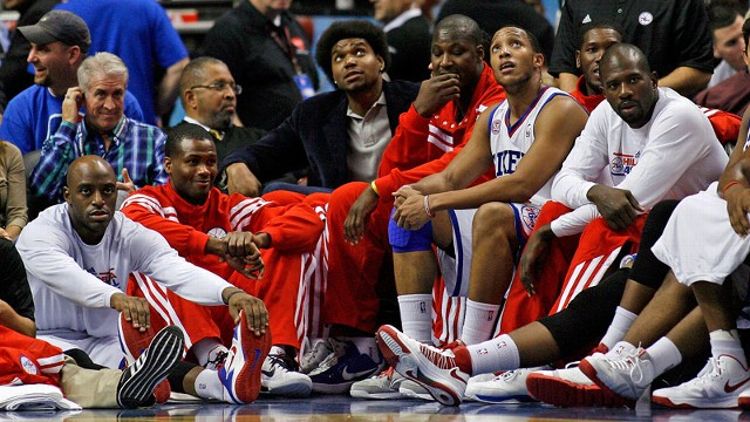 Well, it’s a good thing the Sixers have four center types on their roster and entered last offseason with the goal of handing the reins to Jrue Holiday and Evan Turner. Those guys may get more scoring responsibility than even their biggest supporters envisioned, with news today that Andrew Bynum is experiencing continued pain in his surgically repaired right knee and has not yet been cleared to run.

As I noted in my initial NBA preview, the Sixers were going to enter the season in a state of uncertainty regardless of Bynum’s health. They dismantled a solid but ultimately directionless team in order to take a swing at finding a championship direction — nabbing a franchise-level 7-footer, the rarest commodity in the sport, and dotting the court around him with two capable pick-and-roll ball handlers, a slew of shooters, and whichever other frontcourt player emerged as the best fit alongside Bynum. The path there wasn’t all that graceful, as Philly cut ties with two of their most important players — Elton Brand and Lou Williams — to gain cap space they then filled with Spencer Hawes, Kwame Brown, Nick Young, and (via trade) Dorell Wright. Those four players earn about $1 million more combined than Brand alone was slated to earn before the Sixers amnestied him, and about $4 million less than the sum of Brand’s original salary and Williams’s new mid-level deal. That $4 million is just about what Philadelphia added in net salary via the Bynum–Jason Richardson trade, making it theoretically possible to argue the Sixers had some sort of plan in place all along for a run at Bynum. But that’s a stretch.

Regardless: The Sixers dealt for Bynum to keep him long-term, which means signing him to a new max-level contract this summer starting at about $17.8 million in the first season. Tack that deal onto what’s on the books already, including Richardson’s player option for 2014-15, and the math works so that cap holds tied to Holiday (this summer) and Turner (the following summer) would sop up all or most of Philly’s projected cap space in those summers. In other words: This season was to be about finding out whether this core was worth it, long-term.

Losing Bynum puts that question off a bit, if only because the Sixers will play a radically different style on offense without him demanding the ball in the low block and (less often) setting high screens for Philly’s ball handlers. The Sixers can fall back to some degree on the low-risk offense they ran last year, a system heavy on screening, cuts, dribble handoffs and (sadly) mid-range jumpers. They might add a little more high pick-and-roll spice and transition stuff to that mix without Bynum, and having at least one knockdown shooter alongside the Holiday-Turner combination might loosen the spacing a bit. Philly has been blowing the doors off people in the preseason, but whether that carries over into the real competition remains to be seen. Remember: This offense performed at a bottom-five level for the final 20 games of last season and during the playoffs. Opponents still play off Turner all over the floor, Holiday has never been the undisputed no. 1 ball handler, Nick Young is going to take horrible shots, Hawes has to prove his hot early start to last season wasn’t a fluke, and Lavoy Allen is still a pretty unproven player (though one who looks like a solid keeper).

It wouldn’t shock me if the Sixers held strong early on defense. Nine of their first 16 games are against teams that missed the playoffs last season, and there are still a bunch of good defenders here. Holiday can be a terror on the ball (though prone to getting a bit lost away from it), and the Thaddeus Young–Allen front-line combo, the projected starting big man duo until Doug Collins changes his mind again, was ridiculously stingy last season; the Sixers allowed only 91.3 points per 100 possessions in the 191 minutes those guys played together, a mark far stingier than any team put up over the course of the full season, per NBA.com. That is near Taj Gibson–Omer Asik Bulls-era destruction, though over far fewer minutes. The sample size is obviously small, and Andre Iguodala contributed a great deal to a lot of those empty opponent trips.

Bynum is a very good rim protector, but he’s vulnerable in transition (ask the Nuggets) and uncomfortable venturing above the foul line to defend pick-and-rolls or plays in which his man screens for a shooter near the elbow. And though Bynum was projected as by far the team’s best rebounder — the perfect complement to Thad Young — the Sixers still have Turner, perhaps the very best wing rebounder in the league, and some solid rebounding bigs. They were a top-five defensive rebounding team for nearly all of last season, and remained so almost regardless of which combinations Collins ran out.

The same consistency characterized Philly’s defense in general. They were a bit worse when Turner played without Iguodala, but not dramatically so, and the three such lineups that logged the most time together all defended very well, according to Basketball Value. Only one of those three included Brand.

Of course, those units were change-of-pace lineups last season. They’ll have to anchor Philly’s defense this season for extended minutes, and against opponent starting lineups. Some slippage is probably inevitable.

The larger worry is on offense, where Holiday especially will face a difficult test early if Bynum is out. Holiday has ranked near the bottom among rotation point guards in shots at the rim and free throws, and those fancy motion-tracking cameras also found he rarely drove the ball from outside-in, according to a report from the camera’s distributor, STATS LLC, shared exclusively with me over the summer. Bynum was supposed to help change that by drawing double-teams and setting picks. If he’s out for an extended period, Holiday and Turner will have to show how much they’ve developed on their own. If they struggle, Philly could start behind the eight ball in a beefed-up Eastern Conference, where making the playoffs will require at least a .500 record — and maybe better. Philly can withstand a brief absence of Bynum, but a prolonged one — 20 games or so — could be a killer.

Anything more serious could change the entire direction of the franchise, plus alter the trade and free-agency market going forward. But let’s hope this is just a blip amid another productive Bynum season.