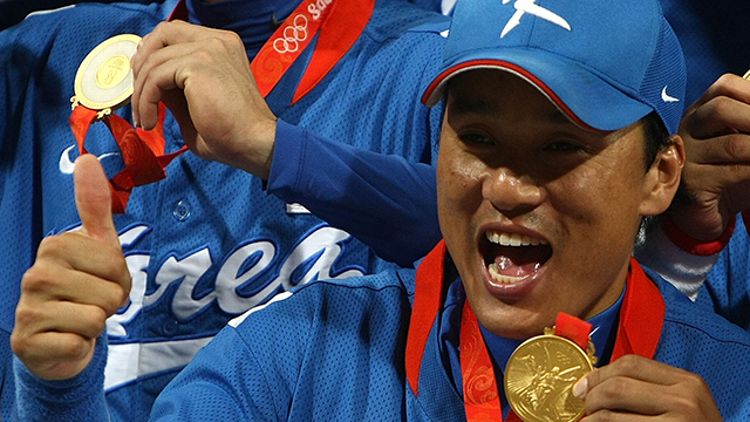 The Olympics are awesome, but they’re run by a bunch of sanctimonious old men, who are so reactionary and so out of touch as to make Donald Trump look like … I dunno, whoever the kids think is hip and with it nowadays. Which make the Olympics rather like soccer and college sports, you might say.

But these wrinkled, half-dead (I presume) Franco-Benelux pedants, satirized brilliantly and often by NPR’s Stefan Fatsis as “blue-blazered international sportocrats” with a condescending attitude of “eet eez not possible,” have come one step closer to correcting one of two massive mistakes they’ve made.

Yesterday, these sportocrats voted to advance baseball/softball, wrestling, and squash to a final round of voting for inclusion in the 2020 Summer Olympics.

The combined bid for baseball and softball is going to lose, because wrestling, a sport that was bizarrely axed from the program despite being a part of the Olympics since the Olympics started, has put together an impressive lobby. Lobbying matters more than anything else to these people, who think modern pentathlon and three-day eventing should be part of the world’s premier athletic competition but one of the world’s oldest and most internationalized sports should not. We’re not dealing with normal people here.

It’s a great injustice that wrestling is in this position at all, but it’s doubly sad because it means that baseball can’t rejoin the Olympic program as well. And who knows, squash might be great, too, but I went to public school, so I’m not allowed to know how squash works.

Anyway, while wrestling’s potential exclusion from the Olympics was met with outrage and panic in that sport’s community, the leadership and fandom of organized baseball responded to the removal of the sport after the Beijing Olympics with apathy. In the great tradition of lazy sports analysis, you could say that baseball is going to lose this vote because baseball’s advocates didn’t want it badly enough.

Here’s why they should.

So what if the international game is still getting off the ground? So what if Olympic baseball probably wouldn’t include major league players? A contest of minor league all-stars with Olympic hardware on the mind would be awesome. If they’d kept baseball around for the 2012 Olympics, we could have seen a Team USA that included Dylan Bundy, Manny Machado, Gerrit Cole, Jackie Bradley, and Matt Harvey going up against lineups of future international superstars: Oscar Taveras, Carlos Martinez, Jurickson Profar, Hyun-Jin Ryu … if you’re too cool and above it to enjoy that, please tell me so I know not to hang out with you. The Olympics, once upon a time, were the coming-out party for Jim Abbott, Ben Sheets, and Stephen Strasburg. You don’t need the game’s biggest stars to make an interesting tournament.

Playoff baseball, be it major league, college, or international, is riotously fun. We shouldn’t need too much prompting to clamor for more of it.

2. The tournament itself would be wide open.

Despite being an American sport, the United States doesn’t dominate baseball. If you’re concerned about a top-heavy competition and limited international appeal, you’d cut ice hockey and baskeball before baseball. In the five Olympics where baseball was a medal sport, the United States only won once. Japan, baseball’s second-biggest market, never won gold. The juggernauts of Olympic baseball were, in fact, Cuba, which won three titles, but at the cost of eventually dressing its players in hideous red pants that simply would not stand in a democratic society. Thirteen of the 16 countries that participated in the World Baseball Classic this spring won at least one game, and by the time 2020 comes around, the playing field will only become more level.

3. Internationalizing baseball is good for the sport.

I’ve been on this horse for a long time, but the most important thing for baseball’s health going forward is expanding into new international markets, and getting back into the Olympic program is a bigger platform for that than even the World Baseball Classic.

During the 2006 Olympics, NBC showed curling pretty much around the clock on its various cable affiliates. Despite knowing nothing about the sport at the time, my roommate and I were transfixed, and, being college students with nothing better to do all day, watched hours and hours and hours of curling coverage, almost to the exclusion of other Olympic sports. By tournament’s end, half a dozen of us were getting together to watch curling every day after class, and to this day I still follow curling. I watch the major tournaments online and I even got a chance to play once and found that actually taking part in the game was even more fun than watching.

Here’s the point — if baseball gets back into the Olympics, there are going to be similar dorm rooms in Madrid and Brussels and Prague, full of college students who are interested enough in this strange, foreign game to buy an MLB.TV subscription and eventually teach their kids to play. Eventually, having an Italian or German or Brazilian player on an MLB roster will be the norm, not a curiosity.

This is a much more important battle for wrestling than it is for baseball, but the fact that we’re even having this conversation ought to sting baseball fans more than it does. Major League Baseball, which is the only organization with the resources to mount a campaign of lobbying (read: bribery, mutual back-scratching and, craven flattery) worthy of the IOC, has absolutely nothing to lose by throwing its weight behind its sport’s inclusion in the Olympics, and it has more to gain than you’d think.