A Terrible Idea That I Fully Support: Michael Vick’s Return to the Eagles 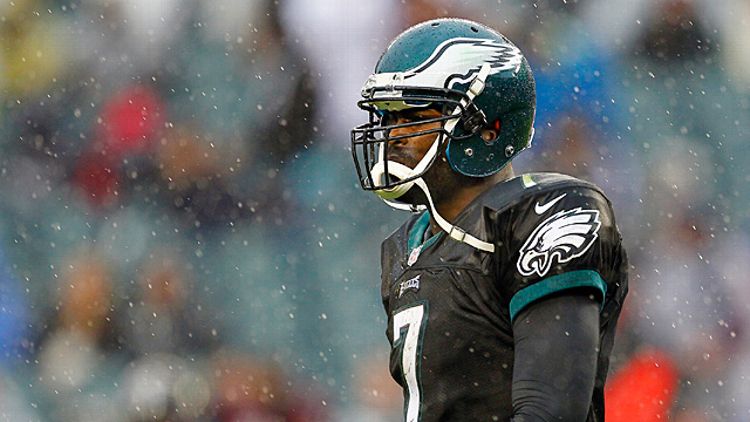 Sometimes there are terrible ideas, but you support them nonetheless. This is a safe place for you to defend those ideas.

This Is a Terrible Idea

Yesterday the Philadelphia Eagles announced they were re-signing Michael Vick to a one-year contract worth up to $10 million. Or maybe it’s a three-year deal with a bunch of the money pushed into the second two years, structured so that the Eagles can pretty much shove the contract into a shredder after the first 12 months. A lot of the money is tied up in performance incentives — for instance it’s been reported that Vick will make $900,000 if he participates in 70 percent of the snaps — which should make Vick and upstart second-year Napoleon Dynamite look-alike Nick Foles practically inseparable bowling buddies 4 life off the field.

The decision to bring Vick back seems to be all Chip Kelly’s. The new head coach had a chance to part ways with the veteran quarterback/tackling dummy. And Vick’s recent performances gave him all the reasons he needed: Vick has gone 10-13 in his last two seasons, with 30 touchdown passes and 24 interceptions. The organization had a chance to start fresh — be it with Foles or someone else — by cutting Vick before February 6, and decided not to. Kelly must have come to the conclusion that they’d rather have Vick, with the flexibility of trading him or releasing him down the line, rather than no Vick at all. “You have to look at the landscape for other quarterbacks,” Kelly said on Monday. Hi, Alex Smith. Bye, Alex Smith. For Eagles fans, it doesn’t exactly make your heart sing with hope.

This decision has been greeted by the Philly media with accusations of hubris (how could Kelly dare imagine he can succeed where the likes of Jim Mora Jr. has failed?), and comparisons to Cortes burning his ships when he arrived at the New World (that was a pretty good one, I admit). By most metrics, Michael Vick is in the twilight of his career. According to ESPN Stats & Information, his QBR ranking has slipped from fifth (2010), to eighth (2011), to 26th (2012) (woof). He holds the ball too long (a no-no in Kelly’s system, no matter what variation he winds up installing), takes too many sacks (Kelly at a coaches conference: “In our attitude, every sack is the quarterback’s fault. It is not a sack if the quarterback throws the ball away”), and he sucks in the red zone (10 turnovers in the red zone over the last two seasons, worst in the NFL). And also? Watching him repeatedly get blown up last season was sort of like watching a football version of Hostel except set in South Philadelphia rather than Bratislava.

Parting ways with Andy Reid was supposed to end one chapter of Philadelphia football history and begin a new one, but it’s impossible to truly start over when the leader of your offense has, fairly or not (in the absence of Jason Babin), become the symbol for the Reid-era failures.

I Fully Support It

This could all go very wrong. Maybe Foles outplays Vick in camp, making Vick a very overpaid, not particularly happy backup. Maybe the Eagles draft someone better suited for Kelly’s scheme and both Foles and Vick are put out to pasture. Maybe Vick doesn’t grasp Kelly’s system and can’t adjust. Or maybe, most depressingly, all those hits, those cracked ribs and concussions, have taken too great a toll on Vick, and he can never get back to 2010, much less 2006.

But this could go so right. A lot of what happened to Vick last season is on him, but a lot can be blamed on the drunken, blindfolded, pub-darts way the team was assembled. There was also the exploding Achilles’ heel of Jason Peters, the exploding ACL of Jason Kelce, and the rest of the injury-riddled offensive line to look at. Asking a bunch of backups to grasp Howard Mudd’s zone-blocking system was never going to work, and Vick paid the price. Vick looked like crap last season, but he didn’t have a ton of time, on any given play, to look much better. What if Kelly figures out a way to protect Vick? What if he figures out a way to get the most out of his quarterback, his star wide receiver (DeSean Jackson), and his star running back (LeSean McCoy). Are you telling me there are many more dangerous three-headed monsters out there? Besides Kaepernick, Gore, and Crabtree, I can’t really think of one.

Doesn’t that give you goose bumps? Don’t you want to watch a version of the NFL in which Michael Vick is must-see TV again? Doesn’t head coach Chip Kelly and starting quarterback Michael Vick make you want to listen to State Property records really loud?

Right now, in Philadelphia, the best player on the Sixers has just begun “basketball activities,” after months of haunting local steakhouses, dressed like some unholy combination of Rudy Ray Moore and Edith Beale from Grey Gardens. Every month is Februany for Ryan Howard, Evan Turner is probably going to get traded, the Phillies pitching staff keeps it real Ozarks, and the Flyers are the Flyers.

I’ve said this before, but for as blue-collar a town as Philly defines itself, it loves stars. Philadelphia needs a hero. And in the absence of a hero, Mike Vick just might do.